The buzz for this year’s RibbonMania was firmly centered on the final rounds of the tournament to crown a new Ice Cross Infinity Champion after the title was held up due to a time limit draw during Tsukasa Fujimoto’s defense against Tsukushi in November.

The development was interesting, as Tsukka had successfully defended the championship against a majority of the roster and seemed on pace to be challenging her own previous record for most defenses during a reign right around the time she’d be facing the woman she defeated to win the title. Instead, a few matches short of that the title was held up and a tournament to crown a new champion begun.

There were no surprises in the early rounds, so coming into Ribbonmania the remaining competitors were the vacated champ (Tsukka), the opponent that forced the vacating of the title (Tsukushi), the prior champion Tsukka had won the belt from (Risa Sera), and the wrestler who ended Tsukka’s prior reign (Kurumi). 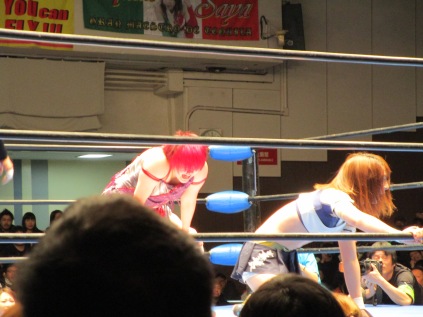 The vacating of the title instead of continuing on course for Tsukka attempting to break her own record seemed to open significant potential for some sort of shake up. Kurumi in particular looked like a monster in the last dojo show before this event.

Which made it even more surprising that she never felt like threat to Risa here. This was a good match, but didn’t have the urgent edge it needed. Risa felt in control during throughout, when her surviving a dominant Kurumi would have been a much more suitable, better story.

In a nice touch Risa remained at announce table to watch the match unfold and see who her opponent would be in the main event.

Coming into Ribbonmania I found the semi-final matches being determined by random draw to be quite telling. I was certain it meant we’d get this match in the semis, and that it’s winner would fail to win the title in the finals. Otherwise the brackets should have been set up for a possible rematch of the bout that vacated the title to happen in the finals. 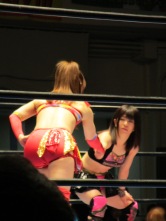 This was the spirited contest expected from these two, who know each other extremely well and have styles that mesh nicely. Tsukka winning with the Japanese Ocean Cyclone Suplex, a move inherited from the mentor of both competing wrestlers, seemed rather definitive. Unfortunate, as Tsukka solidly winning here begs the questions of why Tsukushi was the one to force the vacating of the belt in the first place.

Also, Tsukka’s victory unfortunately killed any remaining drama in the tournament. Risa vs Tsukka is the match that definitely should have headlined had the title never been held up, but as a payoff for a tournament that seemed to promised at least some unpredictability it was by far the least interesting way for things to turn out. The result of the main event instantly became a forgone conclusion, and I could feel a lot the energy go out of the crowd. The post match staredown between Risa and Tsukka got minimal reaction.

3) 7-way: Hiroe Nagahama vs Kyuri vs Maika Ozaki vs Mio Momono vs 235 vs Tequila Saya vs Uno Matsuya

This was originally scheduled to be a six-woman tag match, but shortly before the event Mio Momono was added to the match and it became a 7-way contest where eliminations could happen by pin, submission, or being thrown over the top rope to the floor. I’d been at Mio’s pro wrestling debut in NYC as well as seeing her in a fantastic opening contest at Marvelous’ Christmas Eve show, so was quite excited for her Ice Ribbon debut.

It was an extremely fortuitous change, as they really made the most of the format and this was much more interesting than IR’s traditional random 6-man would have been. EVERYONE got a chance to shine at various points, including Ozaki showing off her strength with a double torture rack, innovative multi-person moves and pin attempts, and an incredible sequence where Uno was thrown to the apron and went crazy trying to stay in the match running halfway around the ring on the apron while everyone inside tried to knock her off. The effort from all seven wrestlers was phenomenal, and they really got the crowd fired up for several sequences. 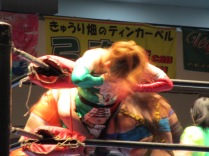 Excellent match overall, and one of my favorites of my trip. In the end Saya got to look strong somewhat surprisingly hanging in until the final two competitors, but the expected (and rightful) wrestler won when Kyuri pinned her with the Fisherman suplex. Great showings for all involved. Really hope to see Mio continue to wrestle in IR.

This was a straight up slaughter, which made sense but also meant not much interesting was going on, particularly when the champion was one of the people being dominated. Adding to the awkwardness was an uncharacteristically botched move off the ropes from Toyota early on, but she acknowledged it and played it off to keep the match moving as smoothly as she could. 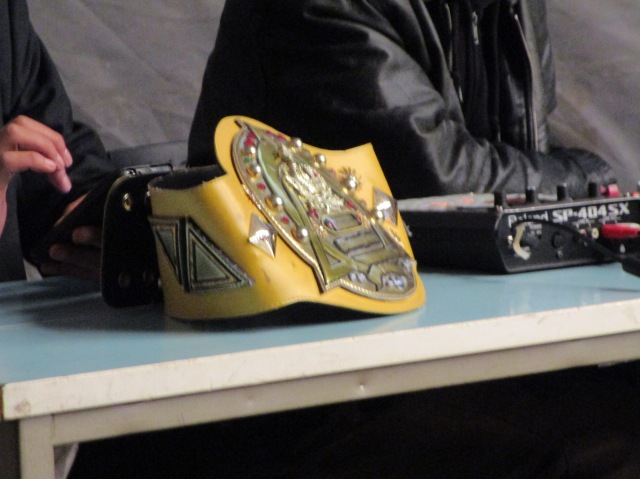 Both defending champion Ai and challenger Maruko were just outmatched by Toyota, who powered through everything either tried on her and simultaneously pinned them both with a moonsault to win the Triangle title. Very short and effective for what it was, but Maruko in particular could have been made a star here by hanging in better against the legend. 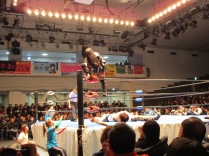 It’ll be interesting to see what’s done with Toyota as champion. The very nature of the title means she’ll likely eventually lose the championship without being pinned for it, so the value to the roster of her reign will be in how her challengers in the meantime look in defeat.

Like last year, Miyako’s Ribbonmania match was a mixed tag affair. The action was quite strong until end, with Miyako being (perhaps unwisely) fearless in the face of her larger, male opponents. They brawled into the crowd early, then returned to the ring to trade some pretty high impact slams and strikes for a bit. 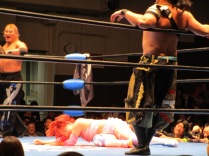 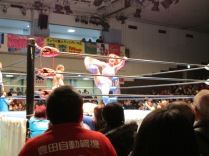 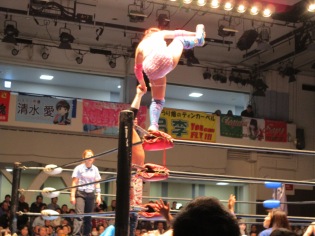 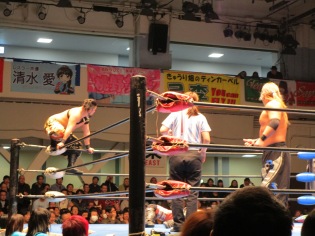 Unfortunately things veered into uncomfortable territory for the finish, with Miyako taking Mio Shirai hostage with a pair of scissors held to Mio’s throat. Ugh ugh ugh. It of course eventually backfired, Mio got free, and Miyako was chokeslammed to give her opponents the victory.

REALLY not a fan of realistic weapons being used (particularly with blurred levels of humor), even with Miyako’s usual ineffectiveness in using them.  Would much prefer Miyako stick to her comical weapons (beachballs, etc) instead of exaggerated ones (knife-like objects, guns, etc). Match was good until then though.

This was exactly what I expected: an ok match with Nanae dominating. Maya was never portrayed as having any real chance of pulling off the upset.

I was a bit trepidatious headed into this match, as I generally don’t care for the Butchers’ gimmick, and signs seemed to be pointing towards them dethroning my current favorite tag team for IR’s tag team titles. Mizunami won Wave’s (her home promotion) singles title the night before, and Misaki was declared her #1 contender. Between the roll the Butchers had been on and the new status quo in Wave, it would have made sense for AR to begin dropping their tag titles here.

But I find Hamuko and Mochi vastly more entertaining when they get serious, which they did here to great benefit. They went toe-to-toe with Misaki and Ryo, leading to an excellent match.

A particular highlight was an intense lariat exchange between Hoshi and Mizunami, who both throw them with incredible force. 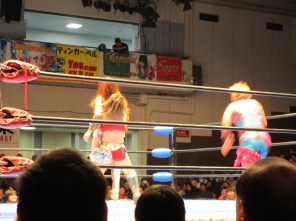 In a pleasant surprise for me, Avid Rival persevered and retained their International Ribbon titles when Misaki hit her beautiful Sky Blue Suplex (bridging half wrist clutcth tiger suplex) on Mochi. Kudos to all four here.

So as a result of winning the semi-finals earlier in the evening, Tsukka and Risa faced off here for IR’s top title. 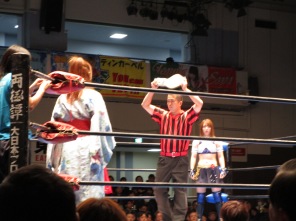 It was instead exactly the match they should have had under the original trajectory of Tsukka’s title reign. This match would have been PERFECT as the end of Tsukka plowing through everyone else on a quest to best her own defense record just to run into a determined Risa dead set on proving she could reclaim her title from the woman who dethroned her.

However without Tsukka’s streak still in tact to add drama and uncertainty not one person in arena bought a Tsukka win here. Now predictability can actually be an advantage when done well, as I praised Ice Ribbon for regarding their New Year’s Eve show.

But here the tournament was sold on the possibility of the unexpected, which made a back and forth contest between determined rivals the wrong framework for the finals. Both competitors should have been conveying desperation here (or better yet someone else should have advanced to face Risa, or the whole tourney been skipped). 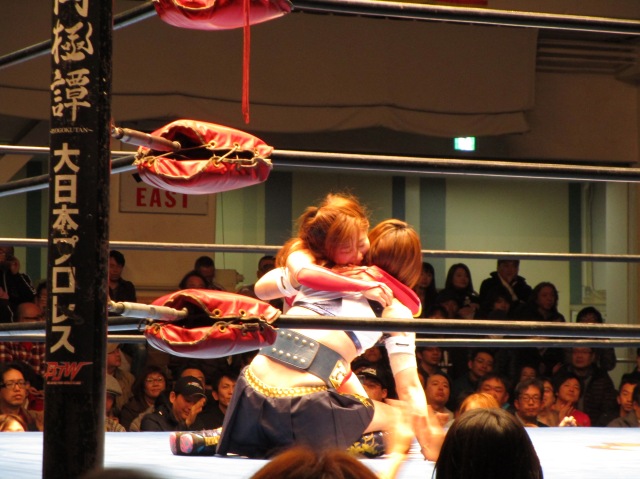 Risa’s a great champion for Ice Ribbon, and she and Tsukka worked a strong match here. But the ringwork and stories must work together, and the booking let them down resulting in a lukewarm crowd for what should otherwise have been a huge moment.

As usual the Ice Ribbon roster spread among the fans after the show to thank everyone for coming. Always a nice touch.

Overall I enjoyed myself quite a bit, but some of the booking decisions worked against the action and as a result live Ribbonmania came across as a good show that should have been a great one. It’s very likely it will play better on DVD though.