The announced theme for September’s Nerd Block was sci-fi, featuring Star Wars, Star Trek, etc, so I decided this would be a good time to try it out. Let’s see what I ended up with:

The promised Star Wars item from the upcoming movie was a BB-8 plush. Decent enough, and now I know the name of the droid I’ve seen plastered everywhere. For Star Trek a Springz U.S.S. Enterprise dashboard toy was included. Cute little novelty. There was a Funko mini mystery box for Supernatural. I have no familiarity, but the figure looks nice for what it is (the zombie eyes are a bit creepy here though). 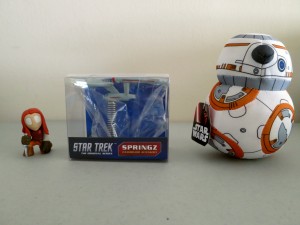 The remaining two items dive into the mash-up realm. Jurassic Galaxy was apparently an online joke that a poster artist turned into a work of art. A small sized print of the original limited run poster was included here. It’s a great little piece of imagination run wild and combines Star Wars, Terminator, Guardians of the Galaxy and of course Jurassic Park. This month’s t-shirt is a different kind of mash-up, combining different elements of Cylons and Battlestar Galactica over the years.

Nerd Block certainly delivered what it promised this month, and everything in it was on theme and of decent quality. I have to admit though for my personal tastes their Arcade Block offering is vastly superior so far. I have two more Nerd Blocks coming with my subscription, so we’ll see if that remains true.