I thoroughly enjoyed Marvelous Puroesu USA’s first event at the Queensboro Elk’s Lodge in August was quite excited for their second show. I’ll admit a little bit of reservation when I found out Iroha wouldn’t be back for this one and Chigusa wouldn’t be wrestling (in fact of the five wrestlers introduced at the first show as the “core roster” only Penelope Ford wrestled), but a variety of great talent filled out the card nicely and the show delivered. Chigusa also explained during the show that Iroha and others were training, learning, and performing in Japan and she promised to bring them back for the next show in 2016.

As with the debut show there was a lot of fanfare, which helps set these shows apart from the normal US indie shows and adds a lot to the atmosphere. After showing highlights of Chigusa’s recent exploding barbed wire match in Japan, there was a ceremony in which the entire roster was introduced in the order they’d be wrestling on the card. After that was a MMA demonstration by a local dojo (there was also one before the first show). As I said overall this was a unique and interesting way to start the show, although the MMA demonstration was a bit out of place. You could tell the participants were excellent, but honestly pro-wrestling is about people coming to see professionals who are experts on making “fake” combat look real, so opening with experts on real combat doing a practice version of it complete with soft phantom punches doesn’t really fit. But it was short and the grappling was quite good, so no real harm done. 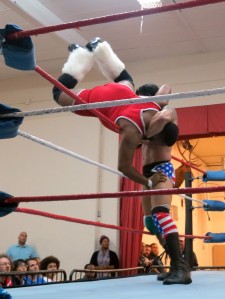 The first wrestling match was a fantastic back and forth affair between “The Man of Steel” Mike Verna and “Wrestling’s Only Male Gymnast” Timmy Lou Retton. Verna’s gimmick is amusing, as his t-shirt bares a Superman style symbol on the front with an “M” instead of an “S,” and “Steel your hopes, Steel your dreams, Steel your girl, Steel your protein” on the back. He was very good in the ring and I’d like to see more of him. Same goes for Retton, who owns his gimmick well and moves amazingly for his size. Every cartwheel, handspring and flip had the crowd oohing and aahing. This started the show strong and was a perfect choice for the opener.

I was extremely pleased to see Nate Carter and David McCall back in tag team action after their impressive showing on the first Marvelous Puroresu USA event. They were just as good this time, and their opponents Paco and Curt Stallion stuck right with them in competitive match. Paco and Stallion also provided some well done dissension among themselves, adding the match’s story.

The rest of the undercard was also quite good. The Fellas Twins are extremely impressive as heat magnets, and they had a decent match with Penelope Ford and Vanity. There was a hard hitting three way between Kevin Lee Davidson, DJ Hyde and Rex Lawless. They took great advantage of having three big, powerful guys in there with the match structure and spots. Crowd favorite Cheeseburger and partner Takaaki Wantanabe faced Rory Gulak and Ultimate Security in another strong match heading into the brief intermission. Coming back from intermission we saw a solid tag match pitting Veda Scott and Willow Nightingale against Brittany Blake and Deonna Purrazzo.

During intermission it was time for the second “ceremony” of the evening, this one featuring Chigusa’s singing debut. I wasn’t sure about this when they announced it ahead of time, but it ended up being phenomenally fun. Chigusa gave some context about how this is common for a lot of female wrestlers in Japan and seemed to be having a lot of fun despite some nervousness as she sang.

For the encore the singing debut became a singing and dancing debut. as Chigusa called Carter and McCall into the ring. Highly amusing stuff that got more so when a fan called for one more song and Chigusa shooked her head then “fainted.” She then motioned for someone to cover her, and the crowd counted along with Carter as he counted his own pin. I’m pretty sure pinning Chigusa has to make him champion of something. 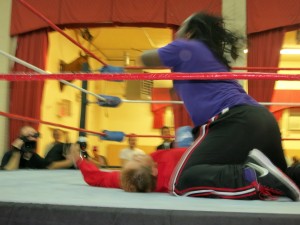 Afterward Chigusa shared her future hopes and plans for Marvelous USA, including the possibility of bringing exploding barbed wire matches to the states, her hope that someday she can give her students the opportunity to wrestle at MSG, and her promise to bring back the talent she’s training in Japan for Marvelous Puroresu USA’s next show in early 2016. 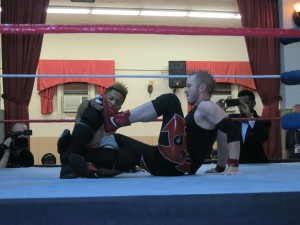 The co-main event of the evening was Leo Rush vs the Amazing Red, and it fully delivered on its potential. It had everything – mat wrestling, high impact suplex and slams, and of course with these two high flying. This was my first time seeing the veteran Amazing Red wrestle and Rush was a perfect opponent for him. Outstanding job from both.

The main event featured three debuts for Marvelous, as Kimber Lee and Patrick Clark faced Sumie Sakai and Davey Boy Smith Jr. Lots of anticipation for this, and again they paid off the potential. Smith has a big following from his work in Japan and the crowd was equally excited to see what Tough Enough contestant Patrick Clark could do.

This was a much more traditional mixed tag match than the main event of the first show, with genders not really intermingling except a few (highly amusing) comedy spots with Kimber and Smith and a beautiful moonsault by Sumie onto Clark.

It made sense to keep the matchups male vs male and female vs female here, as Kimber and Sumie wouldn’t have been able to compete against the men in the same way Iroha and Chigusa could. It shows great instincts in how to keep things believable and entertaining in different situations.

The match was excellent showcase for all four athletes and a fitting end to a stong show.

Another extremely fun evening of great action from Marvelous Puroresu USA. The undercard was again nicely varied, a high level of effort was visible from everyone, and the newer talents held their own admirably with the veterans. Top it all off with a pair of main events and the unique, casual and fun feeling ceremonies and Marvelous USA is certainly off to a fantastic start two shows in. Can’t wait for the next one.

[…] event at the Queensborough Elk’s Lodge last August and followed up with an equally good second show (despite the lack of core roster members). The third show lineup looked great, with the return of […]