Day 2 of Shimmer’s 10th Anniversary weekend was Sunday October 11 and it continued right where Saturday left off, providing more surprises, fun, and great wrestling. Before any action the Canadian Ninjas came out and hilariously surveyed the crowd for potential partners for Portia’s last match. Later an amusing series of vignettes was played showing some of the efforts of both captains gathering members. The full teams were kept secret until the match though.

The compressed schedule on Sat forced one match to be skipped for time, so the tapings started with the delayed match being taped for volume 77. It was Thunderkitty vs Hiroyo Matsumoto. A lighter match with comedic overtones that still had solid action. Kitty tried to claim Hiroyo’s Godzilla mask, which didn’t end to well for Granite Cheesecake (ugh) as the Lady Destroyer (much better) lived up to her nickname and won with the backdrop driver.

Volume 78 proper got underway with a spotlight on two newer talents in Solo Darling vs Amanda Rodriguez, followed by a couple of emphatic wins for mainstays Lufisto and Allysin Kay (over Veda Scott and Shazza McKenzie, respectively). The matches were fine and featured interesting style pairings.

Leva Bates was back in full cosplay for her match with Rhia O’Reilly, portraying Batman’s most enigmatic foe. She posed several riddles throughout the match, including an amusing spot where Rhia was tied up in a submission hold and thought the answer to “What has hands but can’t clap?” was “me!” This was a bit long for what it was, and Leva needed to be louder on the riddles and answers to make it work to its full potential. Still, it was a cute idea for a comedic match and was fun overall.

The finals of the tag tourney to name number one contenders was excellent, with Slap Happy (Evie and Heidi Lovelace) overcoming Vanessa Kraven and Tessa Blanchard to earn a shot at the Kimber Bombs once Cherry’s healthy. On top of the great in ring action, Kraven’s knowing indulgence of Tessa’s posturing and bossiness is pitch perfect and highly entertaining. The slowly building tension and eventual feud should be a joy to watch unfold. Slap Happy (how I love the team but hate the name) vs the Bombs will be great too.

Speaking of the Bombs, Kimber Lee had the unenviable task of facing Jessica Havok. Another strong showing for Lee, and Havok is just perfect in her role. Hard hitting matched expected from these two, along with the also expected light comedy from both Kimber and Cherry (on the outside). Havok terrifies Cherry from ringside and, left without distractions, finishes Kimber with a chokeslam.

Kimber’s quite happy… before her opponent is announced.

Newcomers Liberty and Kellyanne English both looked great facing Courtney Rush and Kay Lee Ray, respectively. English in particular made quite an impression on the Shimmer faithful over the weekend. And allow me to once again profess my adoration for Rush’s new gimmick and the work she did with it. Fantastic reinvention of herself and there’s tons of potential there.

Nicole Matthews and Mia Yim had a great contest that was matched in intensity by the crowd’s heckling of Matthews. She hit the roof over “Where’s your title?” and “Former champ” chants and Mia played along and egged her on exquisitely.

Continuing the angle from 76-77 of Yumi Ohka’s heel turn and abuse of Makoto, Ohka came out with new ally Cheerleader Melissa to face Makoto and Hiroyo Matsumoto. Yumi was clearing having a blast with her new character: copious use of the whip she brought to the ring, taunting, booing the fans on her way out, etc. She and Melissa make a phenomenal team. 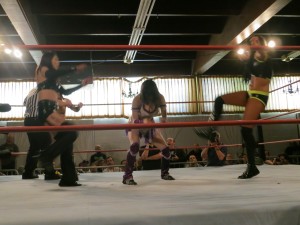 The reffing was frustrating (do not STARE at the heels when they’re cheating, and give some sort or reason for not DQing them when/if they grab you!!!), but a very good match otherwise which firmly established Ohka and Melissa as a dominate, reviled tag team. Makoto took her second Kudo Driver of the weekend (!) to end this one, and again looked strong despite the losses given the level of her opponents and partner.

In the semi-main spot Sonoko Kato faced Kellie Skater. This was as good as would be expected from two top tier athletes. Lots of back and forth momentum swings and Skater gets a huge win to keep her near the top of the contenders list. 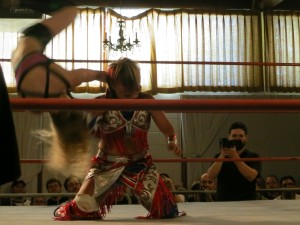 Madison Eagles’ first Shimmer title defense was the main event of volume 78. Nicole Savoy has been incredible in her Shimmer appearances, and her two big victories on Sat leading to a title shot here was a wonderful way to capitalize on her momentum. 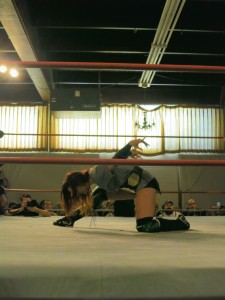 The match was fantastic, highlighting Savoy’s potential and ability to hang with the very best. Besides the expected brutal strike exchanges, the grappling was excellent, and really felt like both combatants were constantly trying to gain/press the advantage and win the match. I found parts extremely reminiscent of Timothy Thatcher vs Zach Sabre Jr from Evolve 47, another fantastic match. This was definitely one of the weekend’s highlights.

After intermission volume 79 opened with Shimmer’s throwback wrestler facing another old style character in Charlie Chaplin. Leva’s costume and act were spot on and Thunderkitty’s swooning was highly amusing. This was kept short and sweet and started the volume off well. 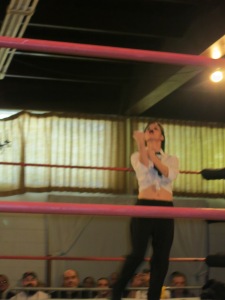 A couple of establishing victories followed, as Kraven continued to be built up as a singles threat with a win over Lufisto and Makoto got the first win of her debut weekend against Marti Belle. Marti’s temper tantrum over Makoto’s streamers was an added bonus.

“I SAID NO STREAMERS!”

The next four-way match was kind of crazy. The crowd had been on Andy Long’s back all weekend as usual, and it was getting worse thanks to some particularly poor officiating in tag matches. Veda Scott had been riling people up by complaining that us booing her made her heart hurt. During the intros here Veda expertly exploited both things, giving Andy a hug during boos and generating an insane level of heat. The fired up crowd was now fully invested, and kept up the boos as Allysin Kay was introduced and managed to get even louder with cheers for Shazza McKenzie and Mia Yim. They made the most of the atmosphere and the match was a blast. The crowd remained super-hot for the rest of the day.

Kellyanne English continued her impressive debut weekend in a competitive loss to Heidi Lovelace. Then in a brutal match that ranged all over the arena (someone really has to come up with something better than “ref’s discretion” to explain why they start counting people out and then stop for 10 minutes before continuing to count whereever they left off), Crazy Mary Dobson scored the upset of the weekend over Saraya Knight. I predict severe fallout from that.

Four matches and four international superstars as opponents for Nicole Savoy makes me VERY happy. For volume 79 she faced her second Joshi opponent for the weekend in Sonoko Kato. As with both athletes other matches this was excellent. I’m amazed at the skill and poise Savoy has at this early point in her career. Having Kato in Shimmer was a great treat and I really hope she returns. 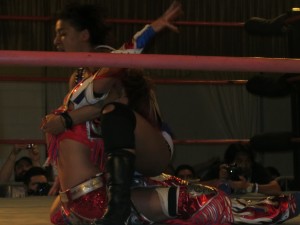 Rhia O’Reilly tried, but her semi-main appearance ended up as just another victim of Godzilla’s path of destruction.

Main event time and Shimmer’s last match for Portia Perez. Danger (as non-wrestling captain of the opposing team) brought out Madison Eagles and Lexie Fyfe to start her team. The first shock of the match was next as Kellie Skater came out… accompanied by recently retired 3G partner Tomoka Nakagawa !!! Nice! 🙂 Tomoka was in street clothes and serving as a second for the team. Another surprise as the final member of Danger’s team was Tomoka’s other tag team champion partner and one half of the very first Shimmer’s main event, Daizee Haze (who has been retired / on hiatus for quite a while)!

The Ninjas had a counter surprise in the form of the other half of Shimmer’s first main event (and also long retired) Lacey! Tag champion Kimber Lee rounded out Portia’s team, with Cherry Bomb seconding them. This was a fun spectacle, focusing more on antics and personalities than all out action (and rightfully so given Portia’s condition and the number of regularly inactive wrestlers involved). Portia appeared to sneak a win with illegal leverage, but the refs restarted the match and Daizee rolled Portia up for the win in a fitting finale for one of Shimmer’s best heels. 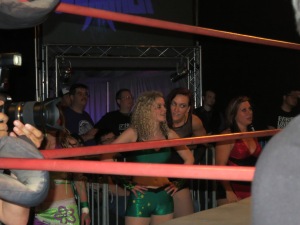 Portia and Danger exchanged awkward stares and words after the match, and then Portia gave a retirement speech consisting of “I hate you all. Now I’m leaving.” It was fitting, if disappointing. I understand the desire to kayfabe to the bitter end and it’s her choice, but I personally wish she had let it up a bit during the Q&A on sat and here for her goodbye.

“You know this is awkward, right?”

As usual I had a wonderful time at Shimmer, and the weekend was a fantastic celebration of its 10th anniversary. Here’s to ten more years! 🙂

Pic with (most of) the Joshi contingent for the weekend.