Gatoh Move’s Ichigaya shows are unlike anything I’ve seen before, and a lot of fun. I highly recommend taking advantage of any chance you get to attend one.

The Ichigaya events are held in a small room with no ring. The crowd is effectively the out of bounds marker and the wrestlers will often use the windowsill to jump off of. It’s a unique format and a great atmosphere. The quality of matches they are able to perform in this environment speaks volumes on the talent of all involved.

Pictures are not allowed during the show but can be taken during the roundtable discussion afterward (during which they hand out tea for everyone).

I was outside the venue looking in through one of the large windows for both shows I attended here, but it was still a good view and a lot of fun.

The 12/30 show opened with Daichi Kazato vs Paksa. It was a solid contest that served as a good example of how the matches were worked with no ring. Hard strikes and careful counter-grappling were the focus.

Next up was a 3-way match featuring “Kokutenshi” Jaki Numazawa vs Antonio Honda vs Sayaka Obihiro. This was a comedy match with specific rule and theme, which was explained ahead of time and helpful translated for us by Honda. There was a box of props off to the side. After every 2-count the winner got to make a joke using the props. Those that the audience applauded received a point. Most points after 15 minutes won. This was extremely absurd and silly, but done well and still entertaining.

The main event was Emi Sakura and Masa Takanashi vs. Kotori and Riho. Great match. They made excellent use of the venue, with whips into the wall between the windows, splashes from the windowsill, etc.

They had some fun recognizing foreigners in the crowd and had Kotori practiced her English with a speech to us at the end of the roundtable portion.

To both open and close the show there’s a song (with dancing) performed by Emi, Riho, Kotori, and Obi. It’s a nice touch that adds to the fun feel of Gatoh Move. 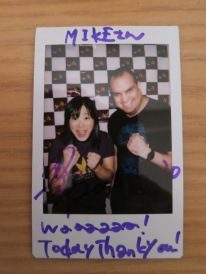 SAKI vs Kotori opened the 1/1 show. This is pretty much as good a 7 minute match as you’ll ever see. I was unfamiliar with both wrestlers before my trip but thankfully saw each several times during and they’re both fantastic. They did an amazing job within the constraints of time and venue.

The second match was again comedy based and again involved Antonio Honda and Sayaka Obihiro. This time after a 2-count the winner would essentially play charades to try to get guest judge SAKI to guess a phrase/person/etc from a pre-written batch of them. Honda was once again incredibly kind and helpful to us foreign fans by quickly writing an English translation for us before each attempt. I liked this a little more than the other one. Amusing stuff. This isn’t the type of match I want to see all over cards, but used sparingly and done well (like it was here) comedy matches can be a lot of fun and provide a nice change of pace.

Paksa and Riho vs Emi Sakura and Masa Takanashi was another great main event. I’ll say again how impressed I am with what can be accomplished wrestling-wise in such a small space with no ring. This held its own with some of the best matches I saw my entire trip. 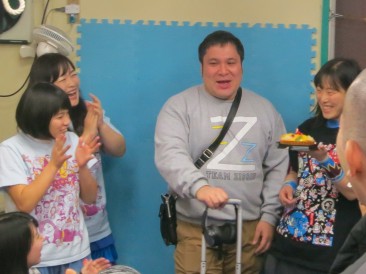 After both shows was an opportunity to buy merchandise and polaroids with the core roster. There was also a special surprise mini-celebration for Antonio Honda’s birthday after the 1/1 show.

To cap things off, for New Year’s there was a signboard passed around during the roundtable that the whole roster signed, then it was given away to the winner of an audience-wide game of rock, paper, scissors. I was lucky enough to win this awesome souvenir (which Emi Sakura added my name to afterwards). 🙂

I can’t say enough about how unique and fun Gatoh Move’s shows at this venue were. Definitely a highlight of my time in Japan.

[…] I mentioned when discussing last year’s Ichigaya shows I was able to attend, these shows from Gatoh Move are unlike anything else I’ve been to, and a lot of fun. […]

[…] I got a chance to see Gatoh Move in their home environment the true depth and ability of the talent on their core roster became even more apparent. The […]

[…] veteran. And boy did it show. Particularly later that trip when I got a chance to see Gatoh Move in their home environment. The 12/22/15 show had been a “traditional” wrestling show with a traditional wrestling […]