“I hate that someone else changed him.”

Bell Cranel has big dreams of meeting and impressing the perfect girl while adventuring in his city’s monster filled dungeon. He’s off to a poor start when he becomes the damsel in distress and said dream girl rescues him. Further complications loom as the goddess he serves might just be jealous… 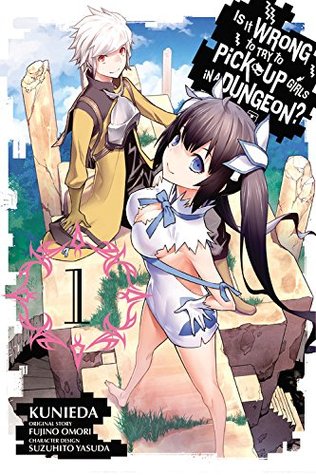 There are several interesting core concepts here, but the test of the story going forward will be whether they will all come together in a compelling way. I like Hestia herself, but the god hierarchy, rivalries and schemes (not to mention the several page argument/taunting about breast sizes) all feel run of the mill at this point and aren’t as intriguing as Bell’s end of the story. So at the moment certain elements are much more engaging than others.

Bell’s central desire to get stronger is incredibly cliche, but so far it’s being done well and has a nice twist with his growth potential possibly allowing him to get too strong, too soon.

The RPG trappings of the world are acknowledged in world as fact, which allows some fun perversions of said trappings without explicit fourth wall breaking. For example, character’s actually have experience gained and other stats and skills magically appear on their back to be totaled and tracked by their god, and it’s treated as a completely normal part of life. This approach is odd, but presented and handled in a fun way.

Decent start. I could definitely see myself reading more.