La Boom is packed with another big crowd. Lenny Lenard opens up thanking the WWE for allowing Evolve to host CWC spotlight matches, but is interrupted by Stokely Hathaway who says one of them is off as TJP isn’t wrestling tonight so he can rest up for tomorrow’s potential title match. 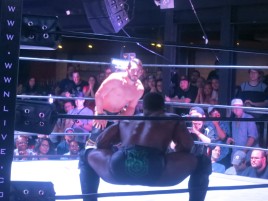 The other promised spotlight match is first, with Johnny Gargano  vs. Cedric Alexander. In a nice touch this was presented the same way as the CWC matches, with the prematch rules confirmation and handshake, and the post match MMA style winner announcement. This was phenomenal and the very definition of a hot opener. All night the CWC competitors all looked like they had taken things up a notch since last I saw them just a few months ago. Alexander looked great here and kept up with Gargano, who’s on the roll of his life. Brilliant choice to start the show with.

After Alexander leaves Drew Galloway ambushes Gargano and grabs a chair. Ethan Page comes out to protect Johnny and takes the beating in his place. Drew Gulak comes out to attack Galloway and presumably start their match as Gargano and Page are helped out, but he’s ambushed by  a returning Chuck Taylor!!!

Catch Point saves and “Dustin” is introduced by Galloway as someone else who resents Evolve and having to carry Johnny Gargano. They challenge Gulak and Williams to put the tag belts up later on and we have a new main event. Of note: Matt Riddle did not come out to save fellow Catch Point members from the vicious heels, but uberheels TJP and Hathaway did.

Next was a Four-way Fray, with Chris Dickinson (replacing Tracy Williams) vs. Fred Yehi vs. Tony Nese vs. Darby Allin. Allin gets tossed over the tope rope into a summersault splat on the floor, hitting his legs on the barricade on the way down. Couldn’t see Allin on the floor from my vantage by the other competitors, particularly Neese, were reacting in shock. When Allin later eventually pull himself up and join the match it was a hero’s ovation from the crowd. He later did a trust fall from the top to the outside onto Dickinson and Yehi. This stuff is getting him over, but seems a bit too reckless.

Fun, faced paced match with strong performances from all four, with Allin as the crazy underdog, Dickinson throwing everyone around with power moves, and Neese and Yehi picking their spots to take prime advantage of openings as they appeared. Neese in particular was hitting on all cylinders here, and got the win with an opportune 450 on a laid out Allin while Dickinson recovered from hitting the youngster with a Razor’s Edge off the top. Everyone shook hands and showed respect to Allin after the match.

Ethan Page came out selling effects from his earlier beating to face tryout seminar participant Wheeler Yuta. It’s a good role for Page, allowing him to rack up wins in between big matches while using his experience to help develop the new roster hopefuls. Fired up from Galloway’s actions earlier, Page shows his aggressive side and dismantles Yuta, ending with the package piledriver. Afterwards Page cuts a strong promo directed at Gargano explaining that Johnny’s a man without any support in Evolve and needs to forgive Page and accept him as backup. I dread where I think this ends up, but Page has been killing this angle so far. 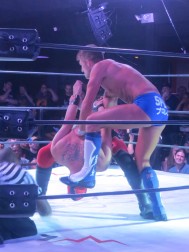 Jigsaw  made a surprise return and gets TJP’s abandoned spot against Zach Sabre Jr. He looks to have gotten even better is his time away, and kept up with Sabre well with some great back and forth submission wrestling during which they twisted each other in ways the human body isn’t meant to go. Like Gargano, Sabre’s just in the zone right now. Great little match despite being the epitome of foregone conclusion.

Matt Riddle is just way too charismatic and talented for the crowd to boo, particularly in NYC where we love our villains, so he gets big cheers as he mockingly comes out wearing Thatcher’s Evolve Title. He faces another heel traditionally cheered in NY in the returning Roderick Strong, who gets a huge ovation. Despite his skills Roderick usually doesn’t click with me for some reason, but he had a great match here with Riddle. The two cocky competitors taunting each other, Strong’s aggressive approach to the match, and Riddle’s continued… well, evolution as a young wrestler all came together nicely. Big submission victory for Riddle to keep him rolling over everyone on his way to a no-holds-barred title shot against Thatcher in August. Show of respect handshake after the match, which again shouldn’t be happening with Riddle. 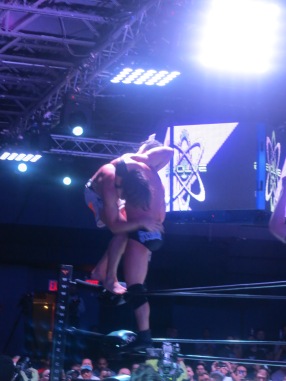 Riddle grabbed a mic and taunts Thatcher after the match, which brought out the champ. Recent booking of Thatcher and his methodical style are starting to turn the crowd against him, and combined with the latter’s aforementioned charisma the crowd actually cheers when Riddle rubs the title belt on his crotch in disrespect. Hathaway interrupts their confrontation to question Riddle about where he was while the rest of Catch Point was “defending the company” earlier, demand Riddle shine the belt up for TJP’s eventual victory tomorrow (more crotch rubbing from Riddle to big laughs/applause), and challenge him to a match in September against TJP. Riddle is clearly a heel getting cheered because of how good he is, but the rest of Catch Point are playing half face/half heel characters that drive me crazy. I don’t mind the group having both, but Hathaway and TJP in particular are legitimately over as heels now and having Hathaway talk about “defending the company” is so ridiculously counter-productive. 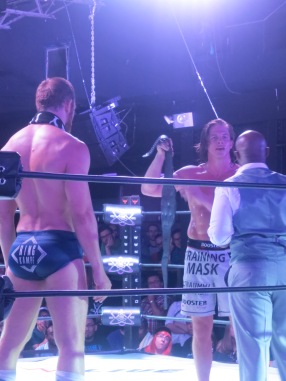 Riddle accepts the challenge, reminds everyone that Thatcher promised to hurt anyone who touches the title, then throws it to Hathaway. Thatcher pretends to understand it wasn’t Hathaway’s intention/fault, but then grabs his hand and “breaks his finger” to Riddle’s amusement on the outside. However as Riddle starts to head back music hits and out comes the night’s challenger for the Evolve title, Marty Scurll. Great triple face off considering Scurll wrestles Riddle the next day. Scurll’s look is awesome, coming out with small sunglasses, an umbrella, and a white fur coat. Riddle sneaks back in the ring because he “forgot what’s his” and leaves with the belt, prompting an odd stare from the challenger and an amused one from Thatcher. 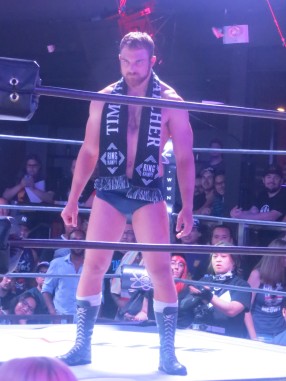 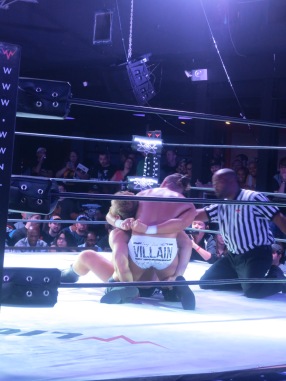 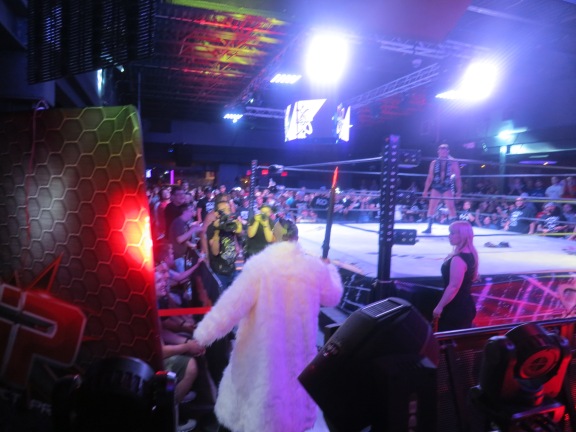 “Hush little Tatcher, don’t say a thing. I’m gonna hurt you with my chick-en wing.” Like Riddle, Marty Scrull is way too charismatic to be booed in NYC and the crowd is firmly behind the Villain in this match, with Timothy Thatcher getting all the boos. One heckler in the front row got particularly annoying shouting out variations telling Thatcher he sucks every other minute. Your valiant champion running a gauntlet of heels to prove he deserves his title should not be getting that kind of reaction if booked properly. While this wasn’t quite what it could have been, I enjoyed it. Scurll targeted the arm to set up his trademark finish that beat Thatcher last time they faced, and Thatcher weathered the storm for another successful defense (to tremendous boos when Scurll tapped). 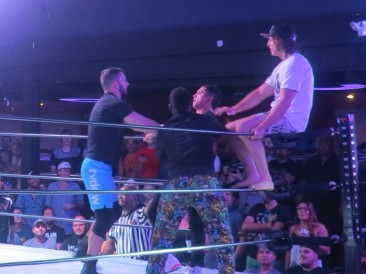 TJP rushed the ring afterward but the rest of Catch Point holds him off, while Riddle just perches on a corner and chuckles. Gulak gets in Thatcher’s face, but appears to want to be sportsman like about their mutual hatred. This dynamic of Gulak, Yehi, and Williams being driven faces in a group with antagonistic, in-it-for-themselves heels TJP and Riddle would be really awesome if Gulak and Williams had explicitly turned face at some point and if there weren’t weird things like Hathaway’s earlier comments. TJP eventually gets by his stablemates to cheap shot Thatcher with a kick that drops the champ. Gulak looks annoyed with TJP and Riddle smiles wider. 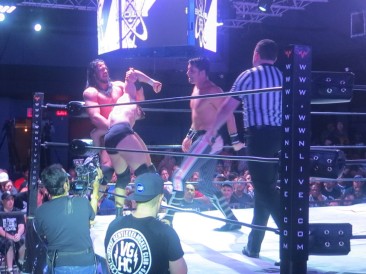 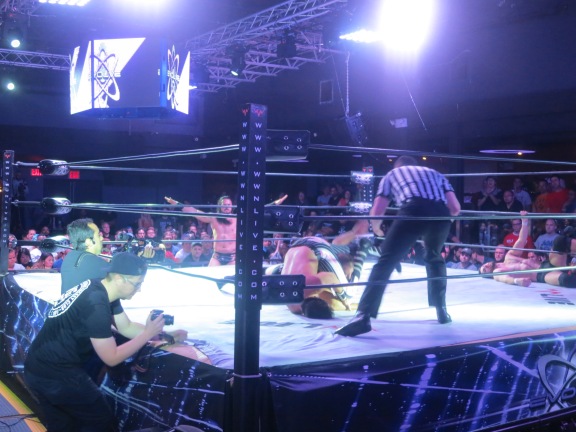 Drew Galloway and Dustin come out as Thatcher leaves for their match for the Evolve Tag Team Titles against Drew Gulak and Tracy Williams (c). Galloway is playing a great resentful heel trying to bring down Evolve from within and Dustin slid right into the role beside him perfectly. This was the serious, chip-on-his-shoulder heel Chuckie T we all wanted to see during his feud with Gargano a few years back. Interesting to see former Gentlemen’s Club partners Dustin and Gulak go at it. Solid main event that as expected once the surprise challenge was laid out saw new Tag Champions crowned. Galloway and Dustin just shred it on the mic afterwards, talking about how Galloway was going to rip the heart out of Evolve the next night by defeating Gargano and in August they’d be at full strength with them, Chris Hero, Cody Rhodes, and ECIII. Dustin asked where all the fans where when he was left off shows. “Chuck Taylor is dead, you morons killed him.”

Despite my criticisms of the approach to some of the booking, the stories being told are compelling overall and as usual Evolve delivered plenty of fantastic in ring action. This was a great card top to bottom with diverse matches and a big surprise return that lead to intriguing developments heading into the rest of the summer shows. The pace was kept up nicely as angles intertwined and matches led directly into other match. Fun show definitely worth catching the replay for.

Can’t wait to see Riddle vs Scurll on the next one.

[…] Title against  Cedric Alexander instead. Great opportunity for Cedric, who wowed me in Evolve and is capable of much more than what he’s been allowed/able to show on Raw and 205 […]