This isn’t the surprise Kana’s signing was when I wrote NXT Step for a Legend, as Johnny Gargano has been working freelance for NXT for a while. But having had the privilege of attending his last appearance at Evolve this is a good time to look back on my experience with his career and wish him well in the coming phase of his career.

As I mentioned then, it’s slightly bittersweet to see independent wrestlers moving on, as there are less opportunities to see them wrestle live and interact with them, but overall it great to see performers who have worked so hard for so long achieve success and have an opportunity to show their craft on a larger stage. Kana, Bryan Danielson, Claudio Castagnoli, Kevin Steen, Tyler Black, and John Moxley are just some of the athletes I’ve been lucky enough to see live on the indies and follow as they received an opportunity to work for the biggest pro-wrestling company there is.

Gargano’s journey has been particularly interesting, because I’ve watched him grow throughout over half of his career via his time in Dragongate USA and Evolve. I believe the first time I saw him wrestle live was at DGUSA Freedom Fight 2010 at the Rahway Recreation Center in NJ. This is the night after the formation of Ronin and it was already interesting to see how the young man who went to a tryout at DGUSA’s first show had changed. Seeing the new stable team for the first time as a group determined to take its future into its own hands was a treat.

They would do just that, particularly Gargano. For a year both success and tension would increase among the members of Ronin, and at Freedom Fight 2011 he’d become the first non-DG Japan talent to hold the Open the Freedom Gate Championship (and third champion overall). This would be a record setting reign that would forever establish Gargano as the backbone of DGUSA/Evolve, giving him the “Icon” nickname.

It lasted 873 days and saw Johnny go from beloved conquering hero trying to fend off his former Ronin stablemate Chuck Taylor who turned his back on Gargano and Swann to an insincere, despise heel champion who thought he was better than everyone else but ducked from any legit challenge presented. Gargano’s success and commitment to playing both versions of himself help illustrate his depth of mastery over professional wrestling as an art form beyond just his (equally impressive) physical skills. He would defend the title 22 times in both DGUSA and it’s parallel promotion Evolve before losing it to fellow competitor from Evolve’s early days Ricochet once Gargano could duck him no longer.

My personal favorite memory of watching Gargano came during the heel portion of that reign, at Dragon Gate USA’s 4th Anniversary show on 7/28/13 at the Highline Ballroom in NYC. Gargano was set to defend the title against the winner of a four-way freestyle on the same show featuring CIMA vs Akira Tozawa vs EITA vs Tomahawk TT. Tozawa was both a huge crowd favorite and a perceived long shot, with DG ace CIMA in the match as well as two new up and comers who had never wrestled for the title, so when he pulled off a surprise pin on CIMA the crowd ERUPTED in delight, only to have their heart ripped out moments later as the cowardly Gargano ambushed Tozawa, declared the title match to be happening right then, then locked in the Gargano escape on the lifeless challenger for a successful defense.

Honestly those events upset the crowd so much we were beyond grumpy for the Evolve and United Gate title defenses that followed, but it paid off in spades as Gargano came out to gloat at the end of the show and Tozawa came back out to force him into a real defense. The atmosphere was UNBELIEVABLE, and Johnny’s antics and attitude had the audience rabid for a Tozawa victory. As much fun as I’ve had cheering for Gargano, that evening of cheering against him is a perfect example of how much devotion he has to whatever role he’s in and the expert level of his craft.

After eventually losing the title Gargano would win the crowd back over and fully become the beloved face of WWNLive that he would be for the remainder of his time there, and when he reclaimed the Open the Freedom Gate title from Ricochet 7 months after dropping it to him the audience was once again fully behind the Icon. He reveled in their support and always gave his all to entertain them though a alliances and feuds with Ethan Page and Drew Galloway, along with a lot of other captivating stories, a tag title reign with his best friend, and a multitude of incredible matches.

During 2016 Gargano would also start laying in the groundwork for the next stage of his career, as he started wrestling for WWE NXT in a per appearance roll. During this time he was teamed with fellow independent wrestling star Tomaso Ciampa, and the two have perhaps surprisingly fantastic chemistry as a team. They’ve been an increasingly integral part of NXT and were featured in WWE’s excellent CWC over the summer, having one of the best matches in the tourney during the first round against each other. It’s lead to even more success for Gargano, as he’s wrapping up his independent dates in preparation for becoming a full time part of NXT/WWE. They’ve also continued the recent trend of acknowledging Gargano’s (and others’) experience and time spent in wrestling pre-WWE, which is not only well deserved but also gives context to new viewers of the high level of performer they’re seeing.

Which all brings us to my farewell to Gargano as an indie star this past Sunday at Evolve 69 in Queens. It was a fantastic, emotional show during which Gargano bid his goodbye by being involved in on of the hottest angles in the company’s history and making TWO gigantic stars for Evolve going forward with Ethan Page’s cruel betrayal of Garagno and the latter endorsement of Matt Riddle as Evolve’s future when Riddle came out to save Gargano. Honored to have experienced the moment live, and been there to bid Johnny all the luck in the world in WWE.

Of course there’s much more to Johnny’s career than what I’ve been able to relate here and even than I’ve experienced myself, with Johnny being important parts of Chikara, AIW, etc in addition the Evolve. I look forward to hearing other’s stories of his incredible journey to this point, as well as seeing what lies ahead of him in this exciting next step. 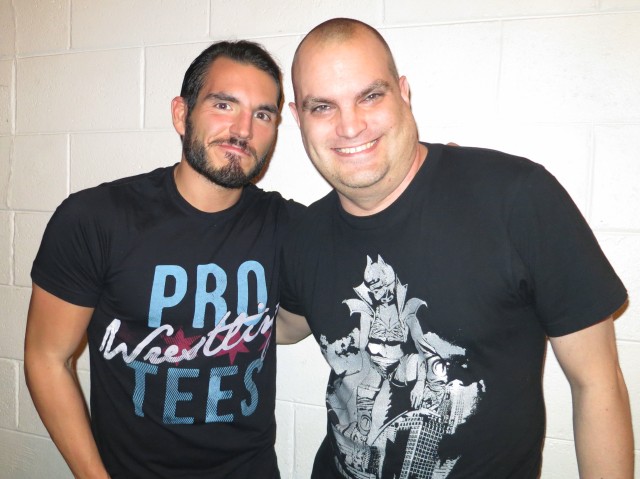 Best of luck to Johnny Wrestling. 🙂

One thought on “The NXT Step for an Icon”