Lot of anticipation going into this one, with DIY’s last shot at the Rivial and the NXT Tag Team Championships, Mickie James’ return to WWE to face Asuka for the NXT Women’s Championship, and a huge rematch between Samoa Joe and Shinsuke Nakamura for the NXT Championship. 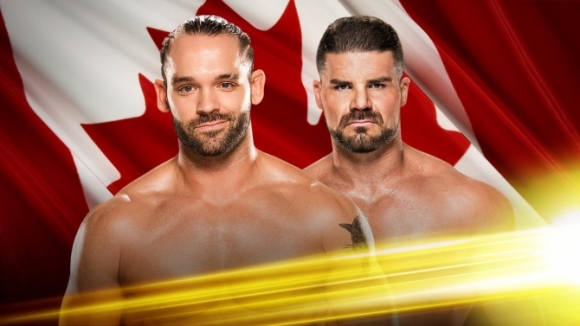 Bobby Roode continues to get amazing entrances (that aren’t exactly discouraging the crowd from cheering him, at least on the way to the ring) and a here a full choir sings along with his theme (and the crowd) live. Once the song ends about half the crowd remembers he’s a heel and is firmly behind “The Perfect 10” Tye Dillinger as he comes out for his grudge match with Roode.

Crowd’s certainly hot, as Tye and Bobby get an “this is awesome” chant for their opening staredown. Roode circles Dillinger as the latter just stares a hole through the Glorious one. Finally Roode approaches and Dillinger unloads on him, getting the better of an exchange of punches and taking things outside the ring. Tye showing an appropriate edge here given the story and totally controls the match in the early going.

Roode eventually takes advantage of Tye’s aggressiveness and catches him charging with a backdrop to the outside, and then just grinds at him for a while. Towards the end they go back and forth until Roode decides to mock his opponent too much (like a good heel) leading to a surge for Dillinger. Lots of teases of a Tye victory – ref catching Roode’s feet on the ropes during a pin, Tye with a superkick, finisher teases, a Sharpshooter spot, small package exchange, etc.

Solid win for Bobby after sending Tye into a ringpost and then hitting an implant DDT (nice change from pump handle slam – still no nonsense finisher & appropriate for heel, but has more oomph).

This went much longer than I expected, to good effect. It dragged only a little during Bobby’s initial heat segment, and overall was a great opener and elevated Tye to where he looked like he was on Bobby’s level even in defeat.

In the finals of the Dusty Rhodes Tag Team Classic Tournament, TM61 (Shane Thorne & Nick Miller)faced The Authors of Pain (Akam & Rezar). The old school stipulation of having AoP’s manager suspended in a cage above the ring is mixed with a strange supporting scaffolding in one corner of the ring (which has already been revealed as a new toy inspiration). The scaffolding seemed to be there primarily for someone to dive off of, and sure enough TM61 made use of it for that purpose.

Both teams tried and there were some nice moments, like TM61’s dual headscissors counter out of AoP’s double powerbomb, but these were two of the more bland teams in the tournament and the crowd was tepid for this outside of the big spots. I wonder if the ending was botched. The heels tried to cheat in the classic, expected fashion given the stip (with Elering dropping a chain to help them from the very cage meant to prevent his interference), but the chain went flying into crowd on the first attempted hit. It looked like it might have been planned, but if so it was an unnecessary and pointless swerve with the heels winning cleanly with their finish moments later.

The AoP victory was unsurprising, but did make me second guess my expectation of DIY losing and imploding during the tag title match.

Speaking of which, next we would find out if DIY (Johnny Gargano & Tomaso Ciampa) finally unseat The Revival (Dash Wilder and Scott Dawson) for the NXT Tag Team Championships in a 2 out of 3 falls match or if they’d come up short leading to Ciampa going nuts and turning on Gargano in emphatic fashion.

Nice showcase here for DIY in the early going, until Revival cheats for the advantage. Classic formulas are classic for a reason. Speaking of classic formulas, the heels get the first fall with their finisher (Shatter Machine in a beautiful reversal of Gargano’s slingshot spear) to put faces behind the 8-ball.

During the second fall Johnny and the Revival just played the crowd like a fiddle building up to a false tag that had the arena ready to riot.  Later a smooth back and forth sequence lead to a Heart Attack and a believable “Revival could sweep” moment.

After Ciampa finally got the hot tag he fought the Revival off by himself for an extended time, further teasing a possible DIY loss at the end with him blaming Gargano. Eventually DIY hit their double strike combo to even things up.

The third fall was just a non-stop parade of believable false finishes and callbacks to the two teams’ previous encounter. The excellent work from all four throughout the match combined with a few totally plausible reasons for the match going either way led to a dramatic finish with the crowd ERUPTING for DIY’s win. Two of the best teams in the business putting on an instant classic. Seek this one out right away.

Asuka’s a favorite of mine and after seeing Mickie James wrestle in Shimmer the previous weekend I was quite excited to see how her return against NXT’s wrecking ball for the NXT Women’s Title would turn out.

During the introductions Mickie did a good job of selling confidence mixed with caution in her expressions. The pace built nicely, with some mind games and Mickie actually putting Asuka on the defensive a bit in the early going. James’ matches at Shimmer certainly helped her eliminate any potential ring rust issues. There were some great exchanges of both holds and explosive strikes early on, a great choice to help re-engage the crowd after the roller coaster ride of the Tag Title match.

It felt more even than I expected to start, which I thought was a good way to portray James as a legitimate threat before Asuka destroyed her. The longer the match went however, it became more and more clear Mickie was being shown as Asuka’s equal and challenging her in ways the Empress of Tomorrow hadn’t been during her time in NXT.

Both wrestlers are extremely charismatic and the match was structured to play to Mickie’s strengths. They kept this reasonably brisk and exciting, and after Mickie having Asuka on the ropes a few times and having unexpected answers to a lot of the champ’s offense, Asuka persevered in fighting for the Asukalock and forcing Mickie to tap.

Asuka’s building delight in dominating opponents is a nice direction to allow her to take the character. She’s always at her best when allowing almost heelish, bullying mannerisms into her ringwork. The taunting refusal of Mickie’s handshake offer after the match not only continues in that vein nicely, but also gives Mickie a storyline reason of disrespect to stick around if that’s what she decides to do.

Several live violins for NXT Champion Shinsuke Nakamura’s entrance for his defense against Samoa Joe, which was awesome. This was built as a bitter grudge match, and both combatants sold it perfectly. Each brought great intensity during the staredown, and really conveyed the idea that they just wanted to get their hands on each other.

Joe was unexpectedly dominant early on, and I adored the psychology of him going after Nakamura’s knee. They really laid into each other as things built up throughout the match. Great match for Joe to pull out the tope, and on the other side of things seeing someone give Joe a German is always amazing. The STRAIGHTJACKET GERMAN made me pop big time, although I do question Joe starting to make regular use of it now considering Akira Tozawa’s in talks and it’s his centerpiece finisher.

Joe’s cheapshot low blow and subsequent Muscle Buster to retake the title just STUNNED the crowd. No one was really expecting the invasion of 50-50 booking here, but it does make a certain amount of sense in that Nakamura’s first loss is now out of the way, meaning they aren’t telling the same undefeated champion story with both him and Asuka, and it seems they’re setting up for a big win and retaking of the title for him in Japan.

Great show, with everything really being exceptional outside the tourney finals, and a tag title match that could be a match of the year contender.

[…] potential in varying the formula, such as when Mickie James returned to challenge Asuka at NXT Takeover Toronto and was portrayed as one of the first real threats to the champion to great effect. And whenever […]