In the wake of a murder investigators are on the scene and their forensic scientist knows who did it and how. However the murderer is secretly among their ranks and will try to distort the evidence and distract the rest of the group away from the true explanation. 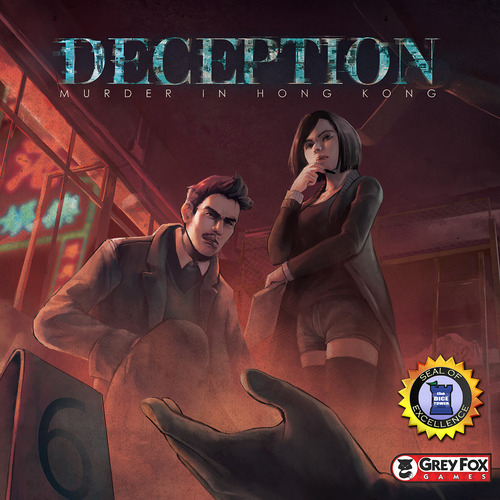 Deception is an asymmetric game where one player is a “forensic scientist” who knows the truth behind a committed crime and is trying to direct the rest of the players (investigators) to the proper means and a particular clue by conveying details about the crime scene. The twist is that one of the investigators is the murderer, and is trying to misdirect everyone else. 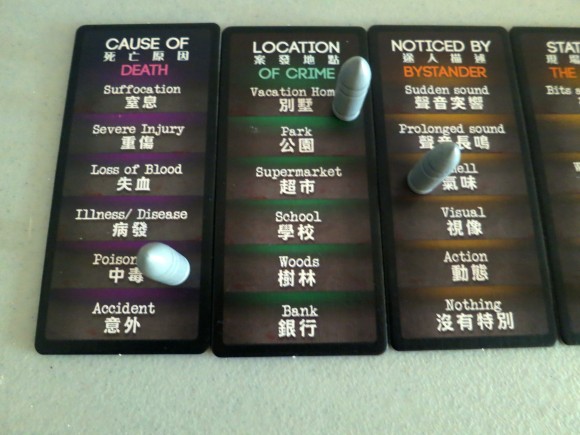 The general idea of the game is similar to Werewolf/Mafia, but getting actual concrete information from the gamemaster (Forensic Scientist) to discuss and interpret makes a huge difference and turns this into a more structured and cerebral game. Each player has four “clue” cards and four “means” cards in front of them. One of each in front of the murderer define the solution the players are trying to figure out. The Forensic Scientist knows the solution and provides information only through indicating which options on descriptive “scene tiles” best match their idea of the crime.

So there is still a social discussion and bluffing aspect, but having a starting point for discussions and a goal beyond just identifying the murderer elevates this greatly over it’s (admittedly fun) inspiration games. It also seems to play quicker overall than such games, which is another nice bonus. 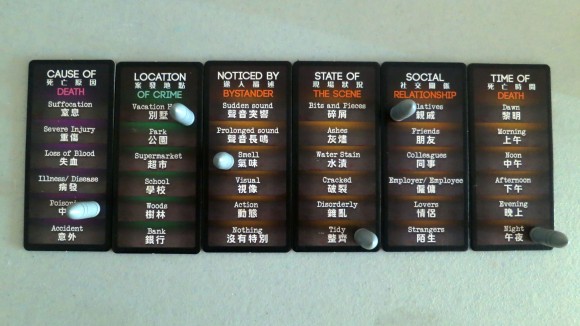 I’ve also seen some comparisons of this to Mysterium. There are some general similarities in base mechanics relating to having an asymmetric role of information distribution, but otherwise this really is a much different game. The biggest contrast (in addition to linguistic clues vs Mysterium’s Dixit style card matching) is Mysterium is purely cooperative while Deception is a hidden role game with an antagonist(s) among the players with a subversive goal. I understand the parallels, but the two games don’t feel that similar to me. I enjoyed both in different ways and see value in having both games on hand for different moods and groups. 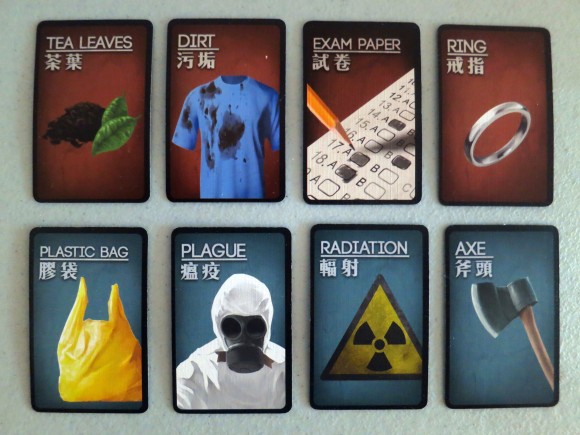 There’s good variety in the clue and means cards and the evidence tiles, which will provide excellent replayability. Since this was our first couple of games we played without the accomplice and witness roles, and without event tiles. They all seem like they’ll add even further depth to an already compelling game.

Overall this is an excellent entry into the social deduction genre and I’m excited about getting to play it more in the future.

I LOVED Mafia. There was a year in college when every saturday a group of us, from 8-15, would gather and play. I had such fun 🙂

Awesome. 🙂 Used to similarly play Werewolf all the time. There’s a game called Resistance that’s an amped up version of those in which no one is eliminated. The discussions there can get crazy heated (in a good way).

This seems a little calmer because there’s things to discuss besides “that person’s lying!”, but it can also be more interesting at times because of that and is totally just as fun.