I love the general setup of T.I.M.E Stories and really enjoyed the initial adventure (Asylum). I’d heard mixed things about this followup first expansion and was curious to see if the potential of the established mechanics would continue to be capitalized on. 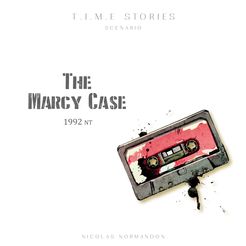 As with my review of the base game / first mission I’ll try to be as spoiler free as possible.

The overarching structure and premise of T.I.M.E Stories remains the same: the players work for a time travel agency and go back in time on missions. Each player is sent back into a receptacle (character), Quantum Leap style, and they must work together to figure out what’s happening and complete the mission. This expansion provides a new story deck representing a completely new mission from the one included in the base game.

Here the brilliance of the design choice to use token and symbols that can be reassigned to different meanings from mission to mission really shows. It allows context appropriate and specific characteristics and items that enhance the story and fit within the particular adventure and time period the players find themselves in.

For example where in Asylum characters might have to talk their way out of certain situations using a “glibness” trait, here the ability to “search” affects how the scenario unfolds for the players. There are other traits, items, etc that are defined within the scenario being played yet use the same components and rules established in the base game.

And highlighting the flexibility those design choices allow might very well have been one of the primary design goals of this expansion. A friend of mine summarized it best with the comment that The Marcy Case “demonstrates the versatility of the system.” It does feel and play quite different from Asylum, and I think that was pretty much the whole point.

I understand why people expecting more of what Asylum was would be somewhat disappointed (and I honestly do think Asylum was just a little better), but this was still an excellent entry in the series that captured that same atmosphere of tension and adventure. Perhaps most importantly like Asylum also had a strong theme and story, including meaningful choices to be made and some of the best and well executed red herrings I’ve ever seen (even if they did sometimes make me want to pull my hair out).

Additionally the conveyed detail and nuance of the environments to be explored and general immersion that is achieved with just cards continues to be amazing. I know I’m harping on it a bit but the framework of T.I.M.E Stories and what can be done with it just incredible.

That’s not to say that this was perfect. As I mentioned in passing above I did like Asylum a touch more, and there are a couple of minor things here I would have liked to seen done differently (that I can’t get into due to spoilers). But I thought it was great overall and don’t agree with the idea that it suffers for being different.

The more I play T.I.M.E Stories, the more and more I adore it. Bring on the next expansion. 🙂

One thought on “T.I.M.E Stories: The Marcy Case Board Game Review”