I recently tried more younger player aimed games with my niece. While they didn’t all have quite the hook for older / more experienced gamers like my previously examined Abraca…What? and Sushi Go!, they still presented fun experiences simple enough for younger players yet with a bit of depth to entertain those playing with them. 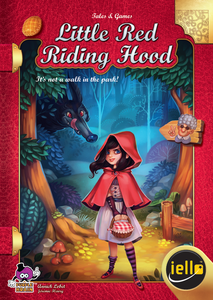 The first two I’ll talk about are from the Tales & Games series, which are games based on stories and fairy tales that come in wonderfully thematic boxes designed like books.

Immediately striking is the quality of components and visual style of these games. The boxes don’t just look like books, the top flips open like a bookcover. Inside said covers are setup diagrams for the included game, which is a great touch. The cardboard chits and tokens are of decent weight, and each game had at least a couple of wooden character pieces.

In deciding to try these my main concern was that they’d be generic games with the theme haphazardly pasted on. Reviews seemed to indicate that wasn’t the case, so I chose two that seemed most interesting and had the most postive buzz. There are six different games in the series so far.

I’m happy to report my concerns were in fact unrealized. Each game is fairly suitable to it’s inspirational story, with goals and mechanics that make sense.

In Red Riding Hood the goal is to get Red to Grandma’s house before the wolf. There are two game modes, one with everyone alternately controlling Red and one with one player as the wolf against everyone else. We only played the co-op version, so I can’t comment on the differences nor the mechanics of playing the wolf.

Gameplay centers around a press your luck element where each drawn card can increase the number of spaces Red might move, but at any point if you draw a card with lower value than those already on the board everything is cleared, Red doesn’t move, and the wolf gets closer.  There are a couple other aspects, like a shorter but risky secret path to take and bonus movement when a card depicting Red is drawn, that add depth without making things too complicated. My niece loved this and the rest of us found it fun enough.

Pied Piper has a little more to the mechanics, with each player trying to keep their house from becoming infested with rats. The infestation level is marked with a tracker that moves up whenever a rat passes their house and down when the Piper does. Movement is determined by player directional arrows on cards that are color coded to correspond to specific rat tokens in between the various houses. We tried this with just two players, which was fine but it really seems the game would be more interesting with more people.

Like Red Riding Hood I think this is great for the target ages, but here the younger players are at a clear disadvantage against older players who can process and plan what the different arrows will do in sequence. Be careful not to be too ruthless when playing this one with young gamers, as I imagine it could frustrate them quickly.

Overall though these are two distinct, well done games that make good use of the recognizable themes. I’m curious to see what the other games in the series are like.

Kabuki really is a brilliant little gem. It’s a “simple” memory game that has an actual game built around it. There are four performer cards, which are the bases for four piles. On each turn a player draws a mask card and places it on one of the piles. That’s it. The key is you’re trying to play it on a performer that isn’t already “wearing” that particular mask. If another player thinks the mask you played is already in the pile, they say “stop” and call for a check of the pile. If they’re right they take one of your victory points. If not they lose one to the bank. That’s it. Most points at the end of the game wins.

It’s a wonderful elegant variation that puts everything in the players’ hands. The chosen theme lends itself wonderfully to the concept, as the mask cards can be stylistic in a way that makes it hard to remember exactly what’s in each pile. Yet when masks are side by side they’re quite distinct and easy to tell apart (which is equally important). Beautiful, vibrant artwork enhances both aspects. Most colors have 2 different mask versions (blue has 3 and green only 1), and each mask version has 5 copies in the deck. So eventually a copy of every single mask will HAVE to be played in a pile that already has a copy.

The straightforward core mechanics make Kabuki extremely easy to teach, yet remembering the contents of the piles as the 60 mask cards are played will tax anyone’s memory. Perhaps best of all the playing field is pretty even, regardless of age and experience of the players. Overall my niece was just a little faster at calling out misplays and a little less likely to be wrong and won most of the games we played (with a variety of opponents all older than her). While she enjoyed all five games mentioned between this column and the one linked to above, I think this was her favorite (with Sushi Go! and Red Riding Hood close behind).

That’s all for now. Hope to be back with more soon. 🙂

lol. 🙂 There’s also a bluffing element, which helped a little. But in the end the 6 yr old still destroyed us.