“The contract will last… ‘until death do us part!'”

This collection contains volumes 1 and 2 of Until Death Do Us Part (as originally published). 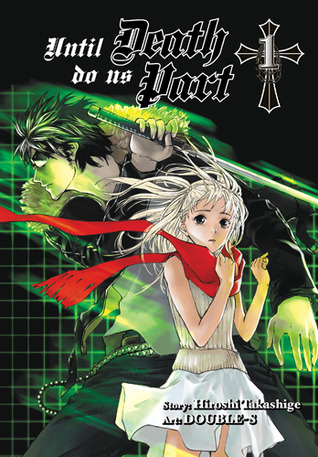 I really enjoyed this “blind swordsman” variation. It doesn’t have a lot of original elements – the blind swordsman, the young girl with mysterious powers everyone’s after, the use of technology to overcome a handicap, etc. have all been seen before. The combination here though is done well and has just enough twists on the cliched building blocks to freshen things up. The backstory of Mamoru’s (also called “Blade”) organization adds some depth and has a lot of potential going forward. The characters aren’t terribly deep yet but their personalities stand out enough and I don’t think the story suffered. The action is solid and what you’d expect from this type of story.

But what really ends up elevating this for me is the multiple parties with multiple agendas woven throughout the volume and the intelligence of the characters. There are characters on all sides that are carefully planning, reacting, and adapting as unexpected complications pop up. I really love this kind of layered storytelling and the feeling that people trying to commit (or stop) involved, ambitious schemes are using their brains. I hope Takashige can keep things at this level as the series continues.

The art is another huge asset. It’s well detailed and very crisp and easy to follow which accentuates the pace and impact of the action scenes. The characters are all diverse and distinctive in appearance as well. Just high quality work all around.

Until Death Do Us Part grabbed my attention more than I expected and I’m greatly looking forward to more. It’s an action manga at it’s core, so if that’s not your thing this won’t change your mind, but it’s one of the most interesting such series I’ve read in a long time.

5 thoughts on “Until Death Do Us Part Volume 1 Review”