Some quick impressions on my first experiences with a trio of card based games. 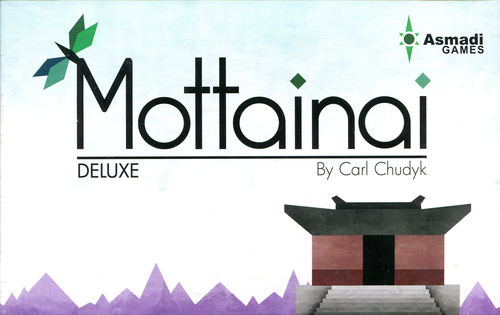 Carl Chudyk has a propensity for creating card games that pack an insane amount of information and functionality onto each card, and after having played Innovation (and Impulse) I would have easily known Mottainai was from the same designer even if not previously informed.

The cards in Mottainai have different functions based on placement around all four sides of each player’s playmat. This leads to a bit of rule overload during initial explanation, but it all fits well once the game gets going and the multiple ways to use each card leads to interesting choices. It felt SLIGHTLY less chaotic than Innovation (during which chains can develop out of the player’s control towards the end), but there is that same feeling of escalation as different types of card abilities become available later in the game. It’s another extremely well designed (and reasonably fun) card game from Chudyk and while I won’t necessarily rush it back to the table I’m interested in playing again at some point.

Clank is a Dominion style deck builder tied to board actions. Moving, buying items from shop spaces, and fighting monsters all require symbols from your player deck that’s built up Dominion style via buying new cards from a general supply.  The currencies and board elements are well implemented, and the concept of getting into a subterranean cave and back out with treasure is a fun one.

However in end it’s still a VP game (right down to having a “Province” analogue) and feels a little too much like Dominion for me (which I’ve gotten beyond tired of and don’t really play anymore), even given the unique twists it adds. Something that had a different goal, or at least was farther from Dominion in terms of the deck mechanics, would have been appreciated. The additional elements do elevate it beyond its inspiration though and the plethora of gamers who love Dominion should jump all over this immediately.

I found the Dark Tales base game reasonably enjoyable, but to be honest was rather disappointed with my first experience with the Snow White expansion. The new cards didn’t add much variety of mechanics (some were actually copies of base game cards with different names) and the distribution and way cards interacted seemed really screwed up by the added cards. There is a recommended variant where some of the base cards are removed, but it was presented as something that affected game length and was totally optional (and removing single copies of certain cards shouldn’t help distribution issues anyway).

The other expansions look more interesting and varied, so hopefully this was just a single misstep, but Snow White was a big miss for me and I’m more likely to go back to the base game alone than trying this again.

So two solid games (though one’s not to my personal tastes) and a lackluster expansion this time around. As always your milage may vary.