With all the comparisons made to Suburbia (which was great) and pieces somewhat reminiscent of Princes of Florence (which is my favorite game of all time) Castles of Mad King Ludwig certainly piqued my interest, and I had been looking forward to trying it out.

Castles of Mad King Ludwig takes various mechanics I’ve seen in other games (the tile selection method, bonuses for taking pieces that have been available longer, etc) and combines them all with a nice layer of spacial gameplay by utilizing different shapes and sizes of tiles/rooms that players need to fit together. Add in different types of rooms with specific rewards and various scoring options and bonuses and there’s a great deal of depth apparent right from the outset.

It all comes together well and my general impression of the game is quite good. I like the idea and implementation, and it’s extremely well designed in the way rooms of different size and shape can interact. 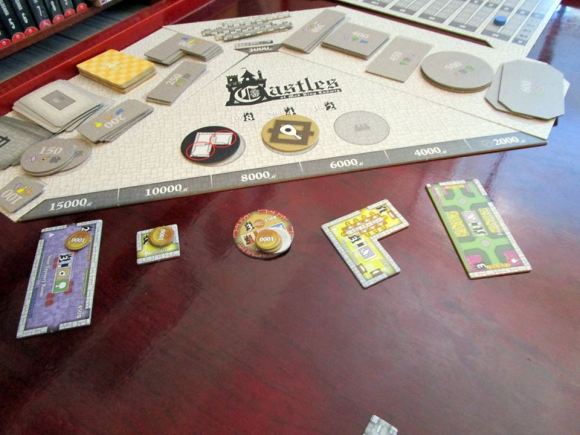 But I have to admit as good as it is I’m not sure it’s as good as I expected. Given the extra layers the different shaped buildings add and a couple of other mechanical differences I feel like I should prefer it to Suburbia, but I don’t think I do. In Suburbia what opponents build can have a scoring effect on your area, and even that small amount of additional interaction has a large effect on the dynamics of the game.

Beyond comparisons to other games though the biggest drawback of this one was the feeling that my castle was just really getting interesting as game ended. I’m sure it’s specifically balanced but the amount of rooms I could build feels low and my initial impression was I wanted the opportunity to do more. Since the number of rooms available is determined by the player count I don’t see this changing in future plays, it’s just something that I’d have to get used to. 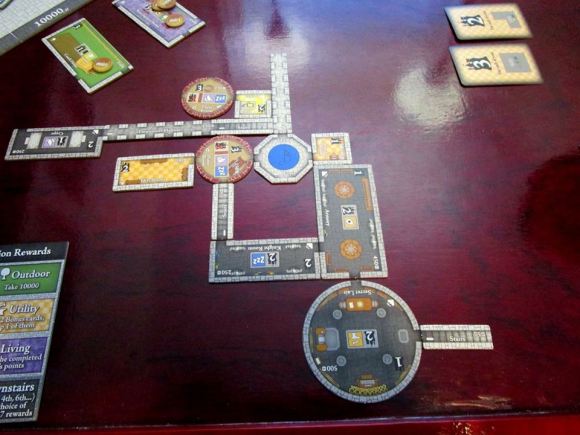 Overall Castles of Mad King Ludwig is solid though. It’s unique in presentation and the spacial elements associated with the different room sizes and types add a nice dimension to the gameplay.  My initial impression is there’s perhaps a little too much variety in the rooms for the set collection / chaining powers aspects, but obviously one play’s not enough to determine that definitively.

So I enjoyed Castles of Mad King Ludwig but I’m not sure I’m completely sold on it. I’d like to try again to see if it feels as abrupt the second time, and/or see how it scales with more players.