Evolve returned to La Boom last weekend with a big card headlined by two of their most popular stars colliding for the WWN Championship.

Here’s a quick rundown of my thoughts from attending live.

During the opening announcements Lenny Leonard shares that this will be the last time both the Evolve and WWN titles are defended on the same show. Silly to make that an actual policy instead of just moving that direction quietly, as the option to have both defended so when appropriate is now limited. Also considering what the WWN title is supposed to be this comes across as inconsistent and unnecessary if it’s still going to be defended on FIP shows when there’s a FIP title defense, etc.

Decent opener, continuing both Williams winning streak and ascension as a threat as well as ACH’s parallel losing efforts and rising frustration. ACH hit a pair of insane topes to Williams that broke the guardrail and wiped out several members of the front row. Given everyone seemed ok, the dives were pretty awesome. Something about Williams’ current style isn’t drawing me into his matches the way he used to, but this was still solid.

After the match ACH’s impending heel turn took another step as he snapped at the ref when asked if he was ok. “Are you serious?” Of course I’m not ok. This is the first match, and I’m better than the first match.”

I was extremely excited for this one, as Kinclaid’s gimmick is a fresh and interesting one and Thatcher is a personal favorite of mine. The advertised clash of styles led to a fantastic encounter, with Kincaid befuddling the vet just a little and trying to adapt to stay alive but eventually getting too much into Thatcher’s grappling game and falling short. Kincaid’s showing cracks in his zen outlook, which should be interesting.

Thatcher’s relentless grinding down of his opponents is a treat to watch, and he’s downright despised as a heel in NYC so the heat was off the charts (overall the crowd was nicely loud and engaged all night). And the best part is he wasn’t done yet…

This was a pretty by the books Yehi match. The crowd’s generally behind him so it was well received. I personally don’t enjoy his gimmick or ring style, so this was my least favorite of the night. Not knocking the effort of either though, and Dickinson looked great.

Yehi has now torn through both tag champs. It seemed to be setting up for a match with Catch Point’s leader (and Yehi’s ex-partner) rather than some sort of tag title match, but in fact it’s been since announced that the wins have led him to an upcoming Evolve title shot.

Jaka consoled his partner after the loss and says there’s no shame in the performance Dickinson turned in. He then polled the crowd about his chances of winning the Evolve title, takes exception to the lack of support, and calls out Sabre immediately. GREAT promo from Jaka to add bite to the match and reenforce his role as the heel despite some hometown support. NYC loves Zack, so this was exactly what was needed to get Jaka booed.

This was a nice spotlight opportunity for Jaka, and he made the most of it. This was not the typical Sabre match (as good as they are), as Sabre responded to Jaka’s aggression with a fierce edge of his own and it added an extra level of wonderful intensity to everything as they beat the hell out of each other. Jaka was also made to seem every bit a threat to Sabre (before losing clean to keep the champ looking like a world beater), which was a well deserved spotlight on a wrestler who’s been extremely impressive during his time in Evolve. If anyone was in fact “sleeping on Jaka,” they aren’t now. Excellent match. 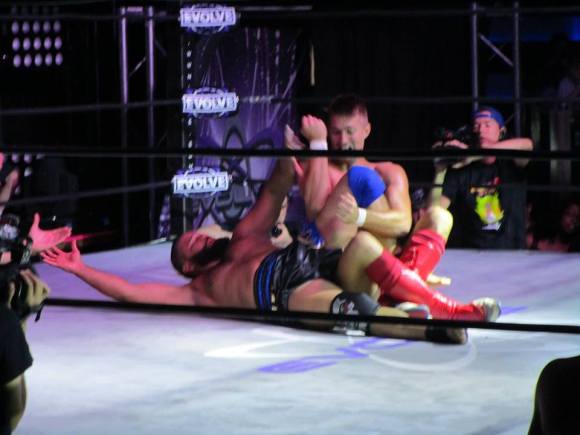 After the match, Stokely and Thatcher came out to confront Sabre, but were interrupted by Darby. Thatcher lays into Allin with an incredible, scathing promo about how Darby’s an idiot who risks his health for a crowd of people who won’t care about him once he injures himself to the point where he can’t perform anymore. Man’s not wrong. He then turned to Sabre and challenged him to a No Holds Barred rematch for the Evolve Title.

As Zack ponders it, Thatcher dropped him with a surprise headbutt, then DESTROYED Darby, ripping the cast right off his arm and applying an armbar as the crowd went CRAZY booing, eventually “re-breaking” the arm! This entire segment was Thatcher’s to carry, and he absolutely knocked it out of the park. EVERYTHING he did was pitch perfect. I really wanted the teased title match to happen at the next NYC show after this…

Sharp is one of the former Gatekeepers, now with a name and an issue with his former employer. He looked good, winning the over crowd in short order with his athleticism and some good fire as he looked for revenge against everyone’s (second) favorite man to hate. Short and intense. I’d like to see more of Sharp going forward. Page got the better of him, which I’ve seen some complaints about but I think was the right outcome for the beginning of such a feud if Sharp’s sticking around.

Nice to see Baretta back, and he received a strong reception. This being in the semi-main spot was an interesting choice and provided a chance for the relative rookie Theory to shine. And indeed this was a great spotlight for him, as he pushed the veteran to the limit before falling prey to the Dudebuster. There were a couple of awkward moments as the two lost their balance during complicated spots, but in both cases they adjusted extremely well, kept things from turning disastrously dangerous, and kept the match going with little loss of momentum. Both looked really good overall, the match got better and better as it went, and like Jaka earlier Theory really capitalized on the opportunity he had here.

After a showing of mutual respect, Priscilla Kelly came out and distracted Trent for a Theory low blow. Apparently finally receptive to Kelly’s message and advances, Theory laid out Baretta to loud boos and Kelly followed with a gloating/taunting bite to Trent’s neck (ok then…). Evolve’s getting heel overloaded again, but this was really well done and should provide a good story for the newcomer.

Anticipation for this was of the charts, and it turned out as awesome as expected. Lee was presented as the champ’s equal, and these two just beat and beat on each other until they both literally fell over. Highlights included a huge pounce from Lee, a Fisherman’s buster on Lee (?!) by Riddle followed by a barrage of sentons, and an incredible nearfall where Riddle just gets his shoulder up by centimeters after a huge Spirit Bomb.  In a beautifully timed and executed finish, both collapse after a vicious Lee headbutt, and Riddle happens to fall on top of Lee for the pin and retains his title. A less than definitive win for the King of Bros, which maintains the tension between him and Lee and keeps the latter strong without having to take belt off Riddle. Incredible match with a extremely well done, appropriate finish.

After the match Ethan Page took advantage of the situation to attack the already downed Lee and Riddle, rambling in wonderful fashion about hating the two “golden geese” of Evolve and vowing to destroy them. Stokely Hathaway and Tracey Williams joined the fun to berate Riddle as Page continued to choke Lee in the corner. Williams then announced he’ll be challenging Riddle for the WWN title at the next Queens show in August. The feud’s been building well and the match’ll be decent, but I’d be lying if I said I wouldn’t rather have gotten Thatcher vs Sabre. Williams let Stokely slap Riddle to big boos, then they left. As Page continued to gloat the faces recovered and cornered him between them, but he managed to slink away to safety. Left alone, Lee was reluctant to fist bump Riddle, but eventually gave in and all is fine between Evolve’s heroes for now.

On par with the excellent Evolve 79 in February, which was one of the best live shows I’ve seen. Commitment and effort was apparent from everyone here, and even the things that weren’t to my personal tastes were solid and well received. Jaka and Theory had potentially star making performances, and I continue to adore pretty much everything Thatcher, Riddle, Sabre, and Lee do. Check this out on Floslam sooner rather than later.