Japan Society’s annual Japan Cuts Film Festival for 2017 started on July 13th and is ran through July 23rd. My thoughts on 2015’s festival can be read starting here and on last year’s starting here. This year I’ve previously seen and reviewed Mumon, Tokyo Idols, and The Tokyo Night Sky is Always the Densest Shade of Blue.

Divorcé Yoshio Shiraiwa (Joe Odagiri) has settled into days spent at a vocational school learning carpentry as part of his unemployment benefits agreement. When a fellow student invites him out to pitch something better, an unusual bar hostess (mating) dances into his awareness. 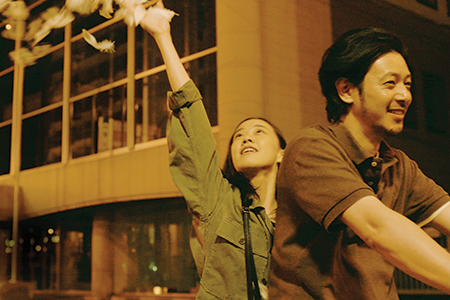 Over the Fence is another adaptation of Yasushi Sato’s short stories of the northern port city of Hakodate. I’ve previously seen one of the other two, The Light Shines Only There, which was one of my favorite films of 2015’s Japan Cuts. This is another story about two broken people coming together, but it feels quite different. We learn less about what causes the leads’ character flaws here, and the situations and personalities involved are simultaneously more low key and stranger. It also seems a bit lighter overall, despite heavy themes and volatile dramatic scenes.  The humor’s well integrated and the acting superb, particularly from both leads. Yu Aoi (playing the eccentric Satoshi Tamura) has numerous intense and/or weird scenes and traits to convey, and her devotion and skill in doing so makes even absurd spectacles like her frequent recreating of bird mating dances captivating.

Unfortunately the plot doesn’t quite do justice to her masterful performance. More background was needed for Satoshi to help explain her point of view and actions. It wasn’t enough to demonstrate that she’s (partially) crazy, that she knows it, and it deeply bothers her (all of which were done quite explicitly and appropriately).  Some context was needed as to how she got to that point for the conflicts between her and Yoshio to resonate properly, and to make her a fully formed character instead of being defined by a single, negative characteristic (even if it manifests in a few different ways). What should have been powerful scenes often seem like weirdness and conflict for its own sake. Aoi did an amazing job with what she was given, but the plot let her character down.

The core story and its unique perspective were interesting, the acting excellent, and the key scenes filled with emotion. But there are some slow parts, and again the film’s main weakness is not giving the viewers enough background to truly connect to the characters and empathize with their struggles. As such this was a decent movie that could have been great with tweaks to the pacing and writing.

Actor Joe Odagira received Japan Cut’s Cut Above award before the screening and had a Q&A afterwards. The questions were varied this time, with honestly a lot of stuff that would have been more appropriate to ask a director, not the lead actor. He broke out laughing a couple of times as he tried to process what he was being asked, but generally responded well and made the most of each to say something interesting (or at least a polite acknowledgement, as in a gracious response to someone who raised their hand to complain about the editing).

I’ll be back later with thoughts on two more films from this year’s festival.