The Hell Screen is volume 31 of Stan Sakai’s samurai epic, Usagi Yojimbo. It’s another volume that benefits from having read Usagi’s previous adventures but also stands reasonably well on its own. 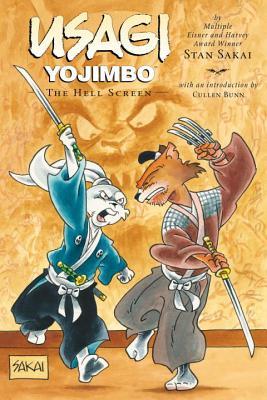 For those who are new to Usagi, a comment from my review of Vol. 1 on Sakai’s choice of medium that has remained relevant throughout the comic’s long run:

“The use of amorphous animals as the characters might seem unusual to first time readers, but it gives Sakai more visual diversity and symbolism to play with, and is executed with such finesse that it quickly becomes impossible to imagine the book without this choice. Don’t mistake the presence of animals as people as a sign this is a ‘kid’s book.’ Usagi Yojimbo covers a period of war, political unrest, and an unhealthy level of danger and can get dark and bloody at times.”

The titular story is three parts long and features the return of one of Usagi’s most trusted companions in a murder mystery amid the backdrop of temple marked for possible redevelopment. It features a disturbing screen depicting Hell at it’s center, and various suspicious individuals with their own agendas and paranoias. The mystery honestly isn’t as compelling as usual this time, but the story was more about the themes of conflict and selfishness anyway and appropriately well told.

The trade is filled out with four shorter stories that similarly feature a mix of themes relating to desperation, consequences, and looking beyond the surface. The inevitability of fate is also looked at, from a couple different points of view. There’s a story of a town victimized during their struggle to survive a rainstorm and flood and a thoughtful follow up about the fate of one of the citizens at the hands of a monster, a contrast of debt and duty, and a tale of responsibility and sacrifice that sees Usagi escort a man and his elderly mother to see his father in the mountains.

The messages (both positive and negative) are a little heavy handed this time but fit with the ongoing narrative and Usagi’s character. The story with the greatest potential ended too quickly and in a predictable, unsatisfying manner, but there are a couple of gems here as well.

Overall this is another good installment in Sakai’s epic, if not quite reaching its usual standards in my eyes.

About 200 pages apiece. They’re collections of the ongoing comic (6-7 comics per volume I think).