The difference between 2016’s 1/4 Tokyo Joshi Pro show I attended and this year’s was night and day, and I went into this third show of theirs for me pretty excited. I knew little of the card though outside of the fact that two of my favorites from the promotion, Reika Saiki and Yuka Sakazaki, would be fighting over the Princess of Princess title. I was in for at least one fantastic surprise… more on that later.

Before the first match the Tokyo Princess of Princess Tag Championship belts were unveiled, and there’s an upcoming tournament to crown the first champions. 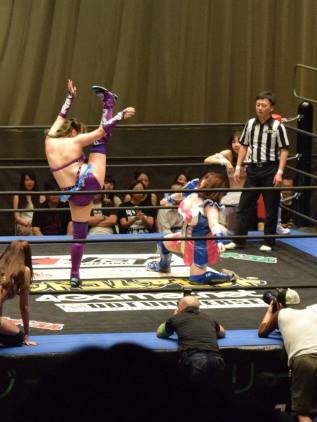 The opener of MIZUKI & Nonoko vs Yuna Manase & Yuki Kamifuku was ok for what it was I suppose, but went too long and was my least favorite match. Nonoko’s heavily featured breast based offense just doesn’t amuse me, and the debuting Yuki Kamifuku was pretty awkward in the ring. Nice seeing Mizuki in TJP though, and Manase looked decent. 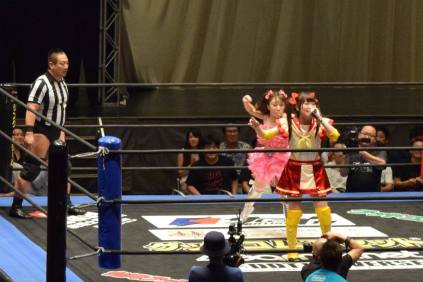 The Idol Lumberjack Death Match between Azusa Takigawa and Maki Ito was wonderful in its absurdity and an example of how the ridiculous stuff can really work. Each idol group serving as lumberjacks got an entrance number (with special referee Sanshiro Takagi coming out with the last) and were armed with plastic toy squeaky hammers. 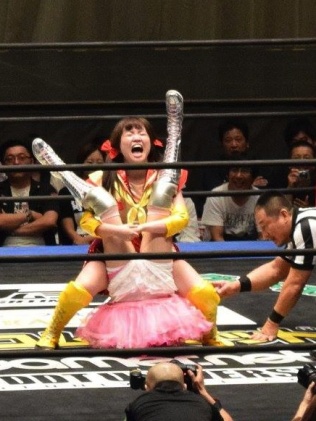 Azusa sung her way to the ring, then when Maki’s music hit she cut it off and sang the same one as Azusa without music instead, with the latter getting more and more visibly furious until she attacked the still singing Itoh to jumpstart the match. This was over the top in the best way possible, didn’t overstay welcome, and played to the strengths and personas of the participants. At one point Itoh went up to the top seemingly to jump to the outside onto Azusa, but she got scared, gingerly climbed down to the apron, and attacked from there. It totally fit and even the apron dive was enough to get the crowd exited. 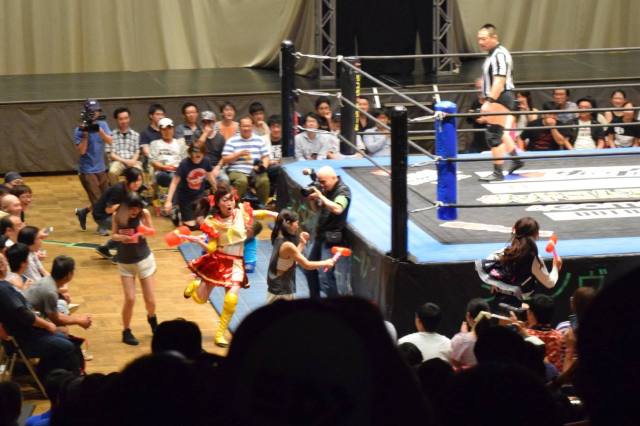 My favorite moment was when the wrestlers got tired of being attack by the lumberjacks, pulled a couple hammers away from them and chased them around the ring. Maki got a HUGE ovation for her eventual victory. This was not great technical wrestling, but it was great amusement. In general I’m seeing continual improvement in the performances of both these wrestlers, which is wonderful.

Even though things are always unpredictable when DDT’s Ironman Heavymetalweight Title is involved, Yu’s 3-way title defense against Marika Kobashi and Nodoka One-san still seemed like a foregone conclusion. Decent match regardless, with the challengers looking solid but Yu eventually dominating her way to the expected victory. The traditional match format / defense for this belt feel really odd, particularly considering shortly after the match was over the challengers resumed going for pinfalls under the title’s 24/7 rule. Yu kicked out, ran, and escaped with the championship intact.

The “International Match” (must every match have a subtitle?) saw a debuting Solo Darling get a pretty good showing against one of TJP’s most consistent performers in Shoko Nakajima. For a match likely booked based on them both wearing tails, they had good chemistry and Solo fits well with TJP’s style. Shoko’s a much bigger star though, and got the expected (and proper) victory with a nice Northern Lights suplex. 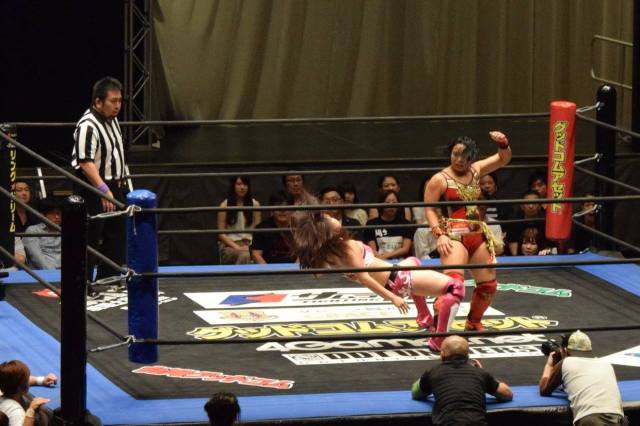 The surprise I referred to earlier came in the form of the incredible Meiko Satomura appearing at TJP to face former (and first) Princess of Princess Champion Miyu Yamashita. This was fantastic and edges out the main for match of the night. I’ve commented before that I felt Miyu was capable of more than I’d seen her show, and this was totally the breakout performance I’ve been wanting from her. 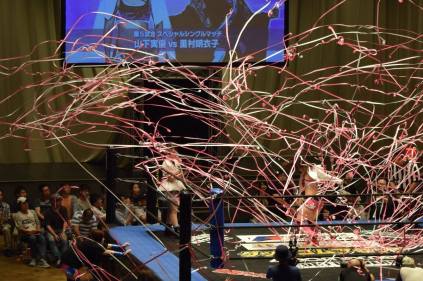 She wrestled like someone with something to prove from the very first second and really took it to Meiko, believably smothering the veteran at points with relentless offense, but just couldn’t put the larger, more experienced wrestler. Meiko of course is an artist in the ring and always a joy to watch. Loved this.

Afterwards Miyu slaps Meiko a couple of times out of frustration (and apparently in a challenge for another match) and Meiko’s so impressed with Miyu’s fire she applauds her for it. Great stuff. 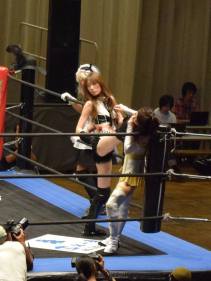 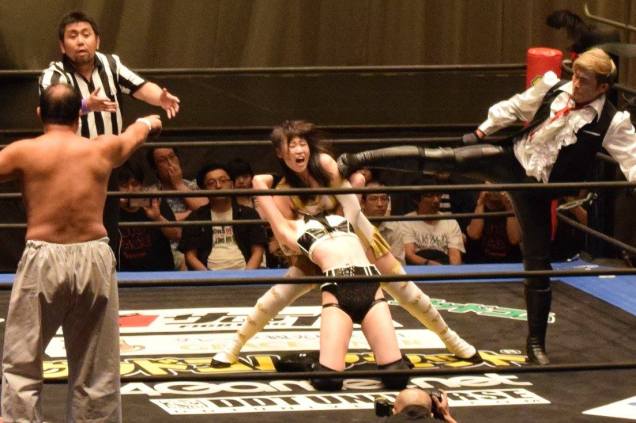 The semi main 6-person tag pitting Rika Tatsumi, Maho Kurone & Shiro Koshinaka against Akai Saki, Martha & Yukio Saint Laurent wasn’t really to my tastes, but it was fine for what it was and featured some good action in between the silly stuff. It was interesting to see the zombie Maho as a face (which worked surprisingly well), and the rivalry between Rika and Saki came across well. Akai denying the 3-count then fainting when her henchmen reluctantly confirm she lost to Rika was a nice touch. Well received by the crowd overall, so it did its job. 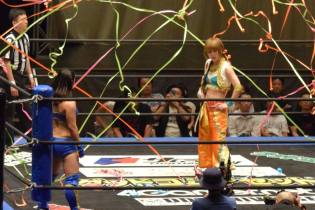 Reika Saiki stepped up as the next challenger for then Tokyo Princess of Princess Champion Yu at the last show I saw in January, and came up short in that attempt in March. Since then Mil Clown departed TJP and her “twin sister” Yuka Sakazaki returned to take the title from Yu. Reika recently won the 4th Tokyo Princess Cup tournament, beating the reigning champion in the finals to do it. She leveraged that into a title shot and it was the main event of this show. 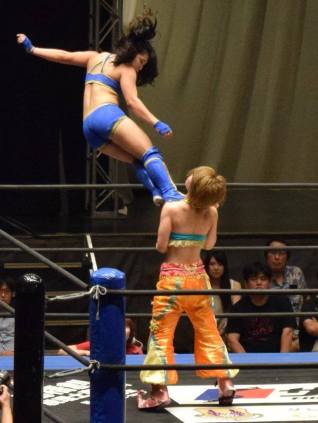 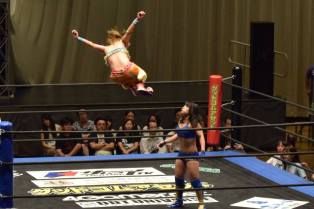 As I mentioned Yuka and Reika are two of my favorite wrestlers in the promotion, so I was thrilled to see this. Yuka is perhaps the most fundamentally sound and consistent performers on the roster, and also wows the crowd with her agility and rope walk spots, so was a great choice for champion. Reika seems their biggest rising star so this was exactly the right time for this confrontation. While I do have to admit I prefer and miss the Mil Clown persona, Yuka’s excellent in any incarnation. 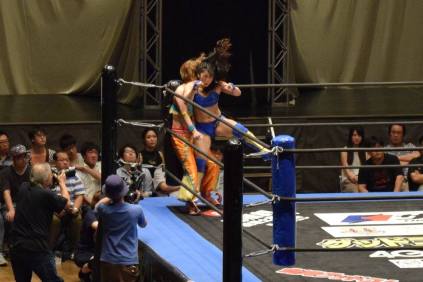 The match was great, going back and forth and building well to a strong finish that saw Reika take advantage of a miss by Yuka with hard strikes and a sweet Shining Wizard, then hit the jackhammer (such a perfect choice of finisher for the Muscle Idol) to become the new Princess of Princess champion. Was awesome to be there for that moment, and Reika definitely deserves a chance to show what she can do as champ.

Tokyo Joshi Pro has been a breath of fresh air for me (discounting my first experience with them having a rather poor show I saw two years ago). They fill a specific niche and do it well, strong effort and commitment is visible from everyone, and perhaps most importantly the development and improvement of the roster over time is wonderful to watch. While certain things can still use some work, in general TJP gets better every time I see them, improving the wrestling and pacing aspect of their shows while still retaining the idol edge and other aspects that make them unique and appeal to their core target demographic. Thoroughly enjoyed this show.

Pleasure to meet and congratulate the new champion.