Pop idol Mima Kirigoe is considering a change to her well established pure and innocent image in order to take her career to the next level. But not everyone is ok with her changing… 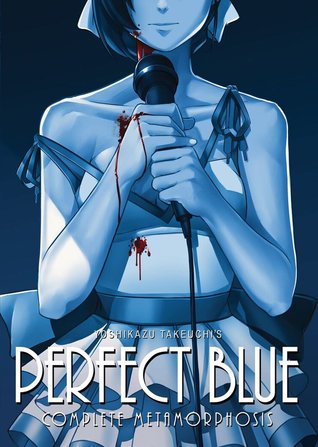 Perfect Blue is one of the best movies I’ve ever seen. It’s graphic and uncomfortable in parts, but it all serves to enhance the atmosphere of this incredible psychological thriller. So I was quite interested to read Complete Metamorphosis, the novel the film was based on.

The prologue is extremely disturbing and sets the tone for the coming tale as unflinching when it comes to subject matter. Looking back I’m not sure it was needed, but it wasn’t completely out of place. Be warned though, this novel pulls no punches. A good pace and writing style through most of the book does help immersion and brings all the story elements, both compelling and unsettling, into harmony. The writing/story also holds up surprisingly well, with little outside of a few dated technology and movie references to indicate it’s over 25 years old.

As mentioned above the movie is a psychological thriller, with deepening mystery and heavy themes as reality unravels around Mima. The film is brutal and extremely graphic, but is a step back from horror.

In contrast the book is suspense that turns to horror, with a well done building feeling of impending dread but very little of the nuance of the film story-wise. The characters, setup, and certain other aspects are the same, but there are major differences in how things play out, themes, etc. Also, Complete Metamorphosis goes way over the top towards the end. I’ll avoid further details due to spoilers, but this is a different experience than the movie.

I’m going into depth in the comparison to provide the appropriate context. Adaptations don’t have to be (and in most cases shouldn’t be) exact, and each form should be judged on its own. But speaking as someone who loves a good psychological thriller but generally doesn’t enjoy horror, that subtle but significant difference is important to highlight. The book is an exploration of obsession, and as such is largely successful. The movie does transcend it though in my opinion, expanding into even deeper and more varied territory.

On its own Perfect Blue: Complete Metamorphosis is a solid read (although the end isn’t quite the equal of the buildup), and furthermore is interesting as source material for the film. But if anyone’s interested in Mima’s story I personally recommend WATCHING THE FILM INSTEAD/FIRST. It took this decent tale of obsession and turned it into a masterpiece.

* A small note on the translation. Names are left in what English speakers would call last-first style. Personally I find this jarring when reading in English and feel a good translation should use certain style conventions of the language being translated into. In this review I have used the more traditional English first-last format.