Although she was nearly a six year veteran at the time, Tomoka Nakagawa’s Shimmer debut on Volume 29 (in April 2010) was the first exposure I had to her work. Joining Nakagawa in the first appearance of joshi talent in Shimmer were Ayumi Kurihara, Misaki Ohata, and Hiroyo Matsumoto. She was impressive in a losing effort against Kurihara in her debut, and stood out a bit extra due to being the only heel of the four.

Nakagawa would become a familiar and important cornerstone in Shimmer, missing only one weekend of tapings from her debut until her retirement. The first three years continued to feature her heel persona, with her general mannerisms and penchant for spitting water in her opponent’s eyes antagonizing the crowd at every opportunity. It was highlighted by a short tag-title reign with partner Daizee Haze in 2011.

On April 6, 2013 Shimmer came to New Jersey during Wrestlemania weekend for Volume 53. It was my first live Shimmer show, and first opportunity to see Nakagawa (and many others) in person. Even more luckily for me, something that would prove very important happened at the last show of the previous tapings: Tomoka Nakagawa and Kellie Skater formed a tag-team, the Global Green Gangsters (3G).

Skater was recently “reformed” and constantly trying to show her new partner that they didn’t need to resort to cheating to win. The dynamic was incredible and 3G immediately had the crowd on board cheering for Nakagawa to “change her ways.” The four way tag-title match from Volume 53 only gave a glimpse of what they were capable of, but the end made it clear we’d be seeing more of 3G in the title picture. One week later 3G would win the titles at the end of the tapings in a wild no-DQ match against cowardly reigning champions the Canadian Ninjas.

I attended my first set of Shimmer tapings in Berwyn the following spring, and the love for 3G as conquering heroes was off the charts. Their struggle, along with Skater and Nakagawa’s fantastic chemistry and charisma, made them two of the most beloved wrestlers on the roster, and their matches were generally highlights of every card. The support for Nakagawa was particularly apparent during her singles match against Saraya Knight on Volume 63, where the crowd’s cheers for her were deafening.  Another amazing live experience was the end of the fall 2014 tapings, featuring 3G, Madison Eagles and Jessica Havok against the Canadian Ninjas and the Kimber Bombs in a no-DQ, no-countout war that spilled through the crowd and all over the venue.

Nakagawa announced her retirement in late 2014, and wrestled her final match in Japan on December 4, 2014. Given the success she enjoyed abroad and what Shimmer meant to her, she chose to do one last US tour and have the last matches of her career in Berwyn the following April.

Being there live was an honor I can’t properly describe. From the surprise appearances of Aja Kong and Dynamite Kansai to Dave Prazak handling the introductions for one last 3G vs Canadian Ninjas match to the closing retirement celebration the weekend was a bittersweet roller coaster ride of emotions and excitement. 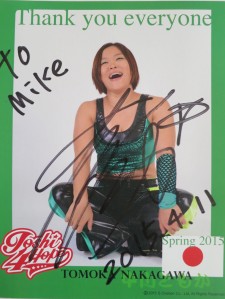 Thanks for the incredible matches and all those years spent entertaining us. Best of luck in your retirement. You will be missed.

3 replies on “Farewell Tomoka: A fan’s personal look back on a great career”

[…] title defenses in a reign that spanned 16 volumes. They didn’t relinquish the titles until Tomoka retired in April of 2015, when during her final weekend they lost the championships to the Kimber Bombs […]

[…] so I didn’t see her wrestle live for the first time until her special one weekend return for Tomoka Nakagawa’s retirement weekend in April 2015.  It was a nice spotlight weekend for Misaki with great singles matches […]

[…] so I didn’t see her wrestle live for the first time until her special one weekend return for Tomoka Nakagawa’s retirement weekend in April 2015.  It was a nice spotlight weekend for Misaki with great singles matches […]