I recently picked up Suburbia based on strong reviews and good word of mouth, but didn’t know a lot of details about it going into my first game. We tried it with three players, and all found it as accessible yet satisfying as advertised.

Suburbia is one of those games that might look daunting at first given the numerous components but is quite straightforward at its core and easy to pick up once you start playing. Nearly every turn consists of picking a tile from the current real estate market (or taking one of three always available basic tiles) and placing it in your play area. That simple. The depth and appeal of the game  come from balancing the benefits and drawbacks of each tile, along with the changing cost as they move along the real estate market track. Wait a bit and you could get a great deal on a powerful tile, but you’ll miss out on it if an opponent decides it’s worth the extra cost.

Different buildings affect your “income” and “reputation,” which both affect your ability to grow your suburb. All of this combines to draw people in, and “population” is the victory point system for the game. The theme is extremely well integrated and fairly intuitive. For example, airports provide greater income the more airport there are in play, but will “upset residents” and damage your reputation if you place them next to living areas. It’s a nice touch that makes it easier to really get sucked into the game. 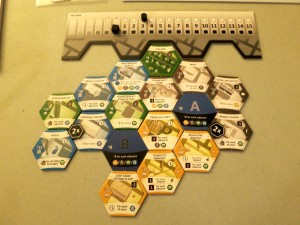 In addition to using the buildings as is, there a couple more options. For just the cost on the real estate track (not paying the base cost of the building) you can take a tile to use as a lake. All tiles have lakes on their backs and all lakes are identical – it gives $2 per adjacent building (other lakes don’t count). Not only is this an interesting strategic income choice, it allows players to “pass” in a way if they need to or potentially block an opponent from getting a valuable building. Each player also has three investment markers to use during the game, which can double the effects of one of their buildings.

The game plays until a certain tile, always placed towards the middle of the final stack, is flipped. When that happens the current round finishes and then everyone gets one more turn. So everyone gets a chance to make a play once they know the game is ending, and all players end up with the same numbers of turns. The number of tiles used varies depending on the number of players. There are also both public and secret bonuses for achieving certain things at the end of the game, like lowest income, most blue buildings, etc. Highest population wins. 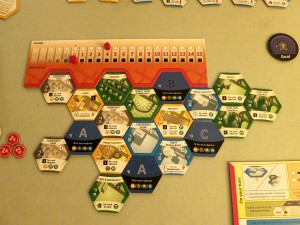 I’m glossing over some details in the mechanics, but I’ve hit the gist. I loved the balance and the strategic choices present while still having some chance involved that forces adaptability. Having some buildings depend on the total number of similar buildings in play, including in your opponents areas, makes you focus on what they’re doing as much as what you’re building. The combination of tile laying and resource management really worked for me, and I can’t wait to play this one again.

[…] Suburbia is one of those games that looks more complicated than it is and is fairly easy to pick up. The basic gameplay is buy a tile and play it to your suburb, and the tiles tell you everything you need to know about scoring, etc. The depth comes in from the way the tiles interact. This is a wonderful, accessible game that has been a hit with everyone I’ve tried it with so far. Full review. […]