This was Neko Nitta’s last dojo show before her retirement, and most of the matches related to her in some way. Also, since it was the last dojo show of the month photographs were allowed during the show (unlike at my previous IR dojo show).

Neko opened the show with a promo consisting of Akane reading from prewritten notes and Neko emphasizing as needed with her standard “nyahs.” Pantera Rosa interrupted and started whipping Neko. After they were separated she cut a promo, presumably about the main event. After she left Neko stunned the remaining wrestlers by dropping the nyahs and responding directly to Pantera’s threats. 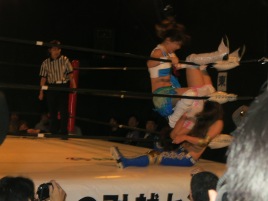 The first two matches were triple threats, likely building up to something with Neko’s vacated Triangle Ribbon Championship. Risa Sera vs Maya Yukihi vs Yuuka had an interesting dynamic with Yuuka having to fight off the cooperating teammates to start but things eventually devolving as Risa and Maya each tried to win. Some consequences of Risa’s win at her regular partner’s expense were teased as everyone kind of walked out on Risa afterwards and left her looking concerned in the ring. Solid opener. 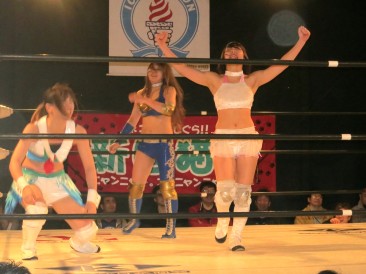 The second triple threat was a bit  of a mess. 235, Kyuri and Akane Fujita never seemed to get on the same page and there were several obviously blown spots. I’ve seen all three of them in good matches, it just seems they still need a veteran in there with them to hold things together at this point. 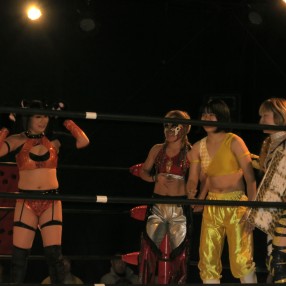 Neko’s first match of the night was the Cats vs Dogs Captain’s Fall Elimination Match. Akane Fujita, Leon and Maruko Nagasaki joined Neko to face HAYATE, Rabbit Miyu, Mochi Miyagi and Miyako Matsumoto. As far as I could tell it was elimination style, except that the match would end immediately if a captain was eliminated. Captain’s were chosen by rock, paper, scissors, and neither team was particularly happy with the appointments of Miyako and Maruko. This was a fun match with comedic overtones, such as Mochi getting distracted by Neko bringing out dog treats and Miyako causing most of her team’s eliminations.

The combatants in the upcoming title match at Ribbon Mania faced off again as Aoi Kizuki and Tsukasa Fujimoto faced Tsukushi and Hamuko Hoshi. Hammy continues to not impress me, as she blew an ARM DRAG during this match. I’m going to cry if she beats Aoi for the title. Was an excellent match otherwise, with several awesome spots of the wrestlers stealing each other’s trademark moves. 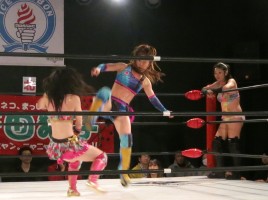 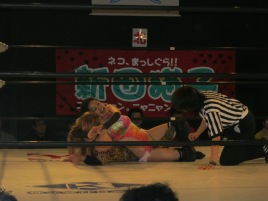 The last match was a crazy brawl between Neko Nitta and Pantera Rosa.  that was unlike anything else I’ve seen from IR. Pantera dismissively ignored Neko to start, and once Neko had enough and slapped her Pantera responded by grabbing her whip and beating the hell out of Neko for several minutes. They went into the crowd, Neko ended up bleeding, and it was general mayhem from bell to bell. A victorious Pantera Rosa finally showed some compassion and embraced Neko after the match. 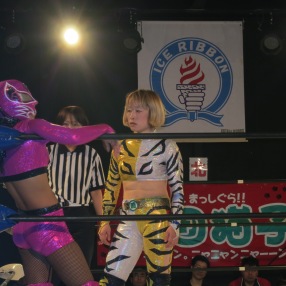 They went to the back together, then Neko came out a few minutes later with Rosa’s mask and a “goodbye letter.” Didn’t understand it of course but the gist of the promo seemed to be Pantera Rosa is gone and Neko also announced her retirement match for Mania.

The show closed with the roster joining Neko in the ring to present some gifts. Neko came out to meet fans and was in good spirits despite the dried blood still all over her face. And the opportunity to get polaroids with the wrestlers inside the ring is still awesome. 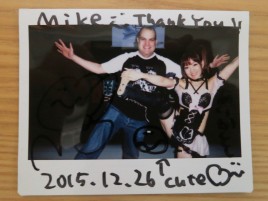 A bit of a departure from the usual for Ice Ribbon and not without its rough spots, but overall this was a fantastic stop on the way to Neko’s retirement. 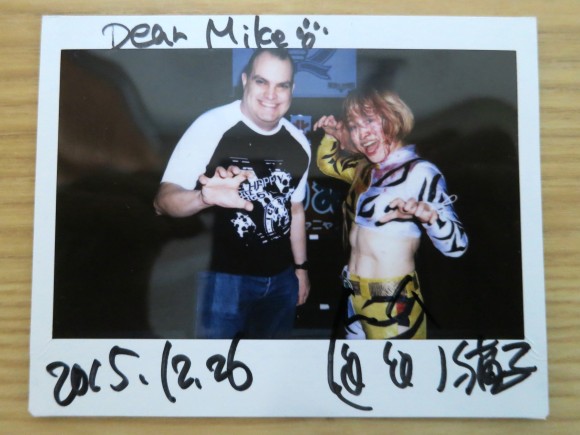 […] This is Neko Nitta’s Produced show,  and her last dojo show before her retirement. I had the opportunity to see this live during my trip to Japan, and my initial impressions of the show can be read here. […]