I’ve been lucky to see a huge variety of different promotions so far during my trip. Here’s two more with shows that were both unique in their own way

Stardom’s year end show was good, although with over half of it devoted to Act’s retirement I’m not sure I have any idea of what their shows are normally like. It opened with a fair amount of ceremony and a big dance number. Once the show proper got underway the three undercard matches were all 5-10 minutes long and it certainly felt like they were moving things along quickly to get to the last two matches. 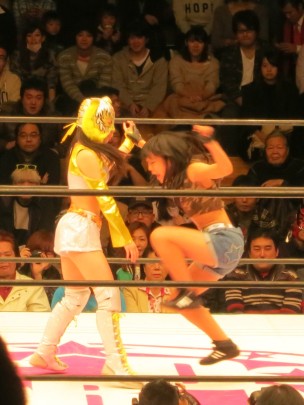 Azumi vs Starlight Kid was a nice spotlight for two very young wrestlers who both clearly have potential. Azumi’s mannerisms and character in particular shined. Kaori Yoneyama and Mayu Iwatani vs Alex Lee and Datura was good, but the outcome never seemed in any doubt which took a bit away from the short encounter.

Hyper Destroyers (Evie, Hiroyo Matsumoto and Kellie Skater) (c) vs Hiromi Mimura, Jungle Kyouna and Momo Watanabe for the Destroyers’ Artist of Stardom titles was a mix of action and comedy, with the Destroyers’ various confetti shooting implements teased and used throughout. Was quite entertaining, but it was also clear the combined talent in that match could have done a lot more given proper time. 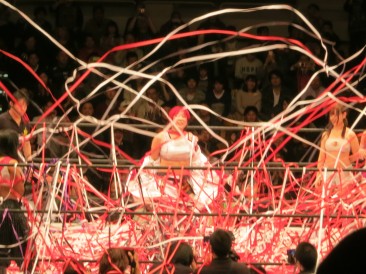 Act’s retirement match and ceremony had an incredible atmosphere around it, and the entire spectacle was awesome to be at live. Act Yasukawa, Haruka Kato and Kairi Hojo vs. Holidead, Kris Wolf and Kyoko Kimura went for about 10 minutes, with back and forth action that saw Act and her teammates more and more at odds. Things exploded and Act and Hojo fought into the crowd with everyone else along for the ride, resulting in a double countout. 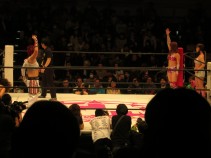 The the “real” match began, as Act rejoined her former Oedo Tai stablemates leading to Act Yasukawa and Kyoko Kimura vs Haruka Kato and Kairi Hojo. This was a fitting send off, with Act and her teammates clearly enjoying themselves against long time rivals. The traditional spot of the entire roster (and then some) splashing the retiree in the corner was amusing to see. 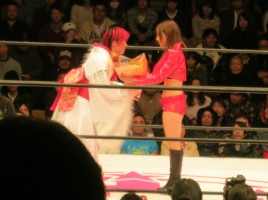 After the match was a ceremony where numerous people came in and presented with gifts / congratulations. At the end was a ten bell salute, a ton of streamers, and a lap of Act being carried around the ring. It was extremely interesting to experience a Japanese retirement match live for the first time. Best wishes to Act in the future. 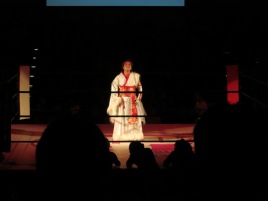 After intermission was the main event, a huge World of Stardom title match that saw Io Shirai challenging Meiko Satomura (c). This was fantastic, with highlights that included Io perform an INSANE moonsault off of a staircase overhang, and of course the end which saw Stardom’s biggest star capturing their main title from an outsider. 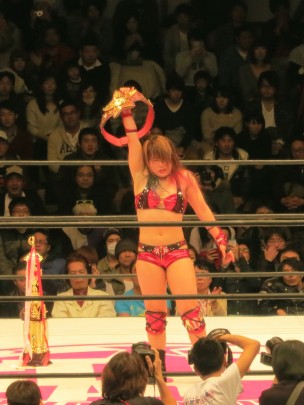 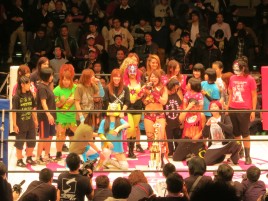 On Christmas Day I was back at the Ice Ribbon Dojo, but for a Wave Young OH! show featuring newer talent. Veteran Yumi Ohka was at the show working the ticket table, but the actual matches were (almost) entirely young wrestlers. 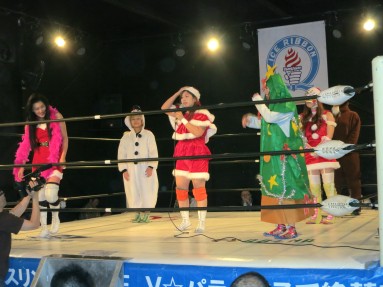 The first 3 matches were about what I would have expected – rookie talent getting a chance to work each other and gain more experience in matches that weren’t great but weren’t bad either. I could definitely tell the difference in performances here compared to when I’ve seen these same wrestlers in the ring with veterans. They have a lot of potential though and matches like these are important chances for them to continue to grow and hone their craft. 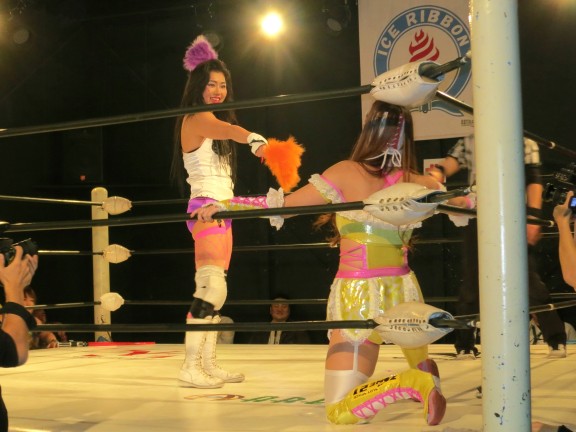 Side note: I still don’t know exactly how I feel about the lightsaber vs feather fan duels in Akane Fujita and Natsu Sumire vs Fairy Nipponbashi and Yako Fujigasaki.

The main event was a different story, as the Young OH! Tournament Final of Meiko Tanaka and Sareee vs Kaho Kobayashi and Rina Yamashita was phenomenal. All four looked great, and like they have far more experience than they do. 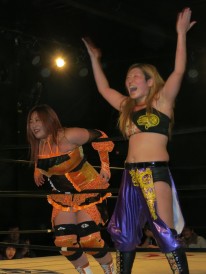 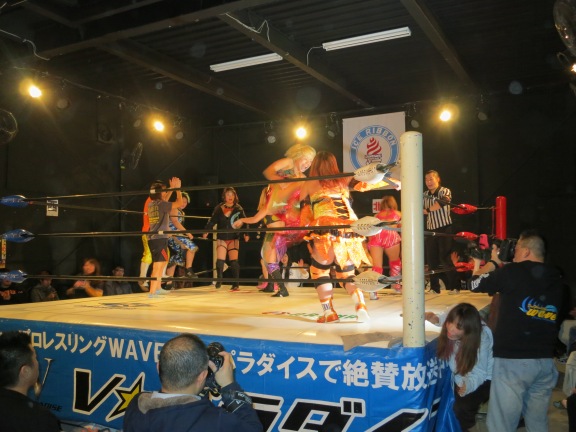 The night didn’t end there however, as the “almost” I mentioned above showed up in a bonus match seeing Rina Yamashita pulling double duty against the soon to retire Kayoko Haruyama. This was a real treat and was just as good as the announced main. Excellent performance by Rina against the much more experienced Kayoko. Got a variation on the roster run in spot again, and poor Rina’s chest was bright red from all the hard chops she took. Nice surprise addition to the card.

Another fun pair of diverse shows. I’ve been really lucky with both the variety and overall quality of what I’ve seen on this trip. 🙂 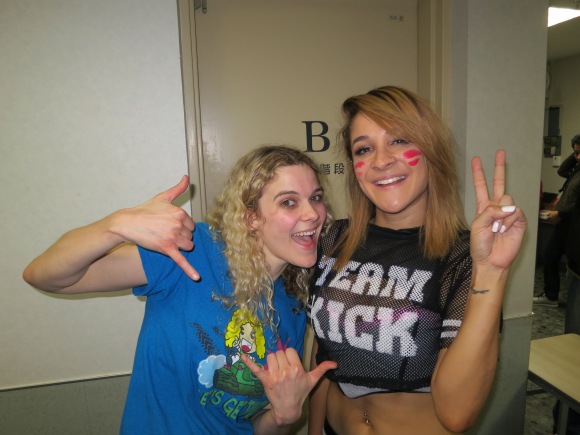 […] New Year Wave 2016. It felt somewhere in between REINA and JWP in tone and approach. Like the Wave Young Oh! show, the lighter antics were confined to the undercard and the main event remained an intense, […]

[…] to also be at Stardom’s big year end show in 2015, which was quite unique as it featured Act Yasukawa’s retirement. I was curious to see how […]

[…] is via Shimmer, but I did see her wrestle on Shine ippv’s and was lucky enough to see her live at Stardom. She was clearly respected wherever she went and always gave […]

[…] My first time seeing Kairi live was under unique circumstances, as she was involved in Act Yasukawa’s retirement match at Climax 2015. […]

[…] My last show of this year’s holiday trip was my second Wave Young OH! OH! show, two years after I saw my first. […]

[…] my first trip to Japan at the end of 2015 on of the best matches I saw was the main event of Stardom’s Climax 2015. It featured what were then and are still two of the best wrestlers in the world wrestling for […]

[…] my first trip to Japan at the end of 2015 on of the best matches I saw was the main event of Stardom’s Climax 2015. It featured what were then and are still two of the best wrestlers in the world wrestling for […]

[…] young talent with fellow Diana rookie Meiko Tanaka against Rina Yamshita & Kaho Kobayashi at Wave’s Young Oh! Oh! 12/25/15 and against Yuuka at Ribbonmania 2015. She displayed great innate ability and instincts, and I was […]

[…] complications that prompted her to retire in December at Stardom Climax 2015 (which happened to be one of the first shows I saw during my first ever trip to Japan). It was sad to see her retire but the match(es) was an […]