Reiner Knizia has designed a number of award winning games, including a personal favorite of mine: Lost Cities. Last year Fantasy Flight Games published a new edition of a 1998 tile laying game of his called Samurai. It looked fantastic, from concept to theme to production value. Having gotten a chance to try it out I’m happy to say it impressed in all regards.

The goal Samurai is to gain control of the most of the three castes represented on the board by plastic tokens. Castles for military, Buddas for religion, and rice for commerce. Players place tiles each turn from a hand of five. 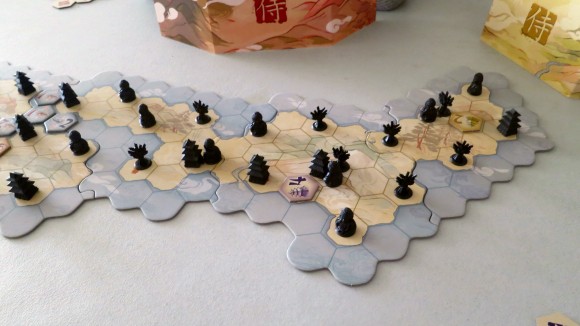 Whenever certain spaces are surrounded by land tiles the piece(s) are claimed by whichever player has the highest influence for that caste in the surrounding tiles. Samurai act as wild cards and count for any of the three castes. If there is a tie for highest relevant influence, the piece is claimed by no one and is placed to the side of the board.

The game ends when either four pieces have been set to the side of the board as a result of tied influence or when the last piece of any one caste is claimed / removed from the board. Each of the three caste tokens is given to the player with the most of that caste’s pieces (and remains unclaimed in the case of a tie). The person with the most claimed castes wins. In case of a tie, the tied player with the most pieces in castes other than the one they claimed wins.

While a little difficult to easily explain in words, the gameplay is extremely intuitive and quick to grasp. Yet there is a ton of potential depth, particularly with players getting to choose their own starting hands and take part in setting up the board (we took the instruction’s suggestion to do both randomly for our first game). Little touches like having some “quick” pieces that are exceptions to playing only a single tile per turn really open up possible strategies. 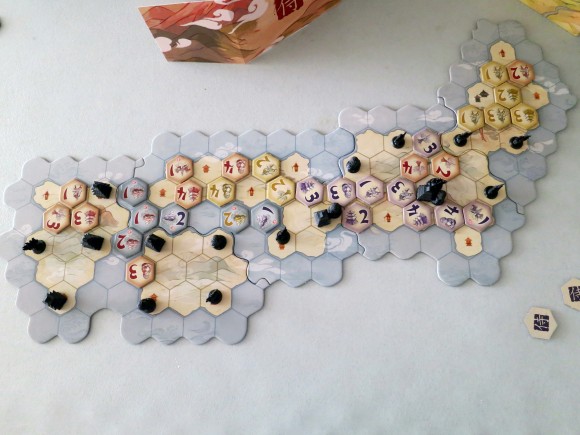 If there’s one major potential flaw with Samurai it’s the possibility of major analysis paralysis. Every player has the exact same distribution of tiles they will play throughout the game. The player screens even have them all pictured to help you remember what you have left. This is great for the strategic depth of the game, but considering all played tiles can be seen and influence totals are usual extremely close, a player could not only get bogged down with trying to determine their best choice from what they have, but also with counting opponents visible tiles to determine what each other player has left and incorporate that into their strategy. We kept things going at a decent pace, but the potential for LONG turns is huge.

The component quality is fantastic. Good thickness to the cardboard tiles, great looking plastic caste pieces, and beautiful graphic design fitting the chosen theme. Also, the modular board scales nicely for each different number of players.

Samurai is an accessible and fun tile laying game that is also surprisingly deep and beautiful to boot. With the one reservation that games will drag with AP prone players, I highly recommend this as a great addition to nearly anyone’s gaming closet.

Great review. Love this game and excited that it got republished.

[…] Speaking of excellent production value, Samurai is gorgeous, from the graphic design on the board and tiles to the plastic statues whose capture the game revolves around. I fell in love with this game immediately, particularly with regard to the simple concepts and mechanics that mask meaningful choices and fairly deep gameplay. I fear it might be prone to analysis paralysis for certain players, but so far that’s the only even remotely possible negative I see.  Full review. […]