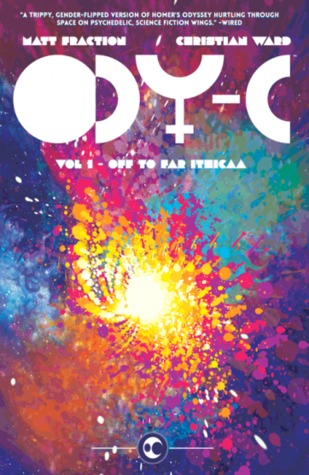 The Odyssey in space in a universe where nearly all the people and Gods are women. Sounds much more interesting in premise than it ended up in execution. Fraction’s re-imaginings of Greek myth and parts of Odysseus’s journey are brilliant, but suffer under too grand and abstract a vision. The comic isn’t particularly cohesive and it’s often unclear how the scheming of various Gods behind the scenes is affecting the main(?) story of Odyssia’s trip home.

Odyssia herself doesn’t connect with the reader well, and other than being told she’s a hero I’m not sure why we’re supposed to be cheering for her successful return (especially since we’re also told she might or might not even want to go home in the first place).

I found the art extremely variable. Like the story I think it tries to hard to be abstract, leading to muddled coloring and hard to follow sequences. On the other hand some pages and panels are truly beautiful, capturing the trippy and alien feel they seemed to be going for.

ODY-C is a comic I expected to, and wished, I liked more than I did. As a huge fan of both Greek mythology and science fiction this comic seemed right up my alley. Unfortunately I don’t think it worked well nor achieved even close to its full potential.