April is here and so is another box of snacks and treats from Japan. 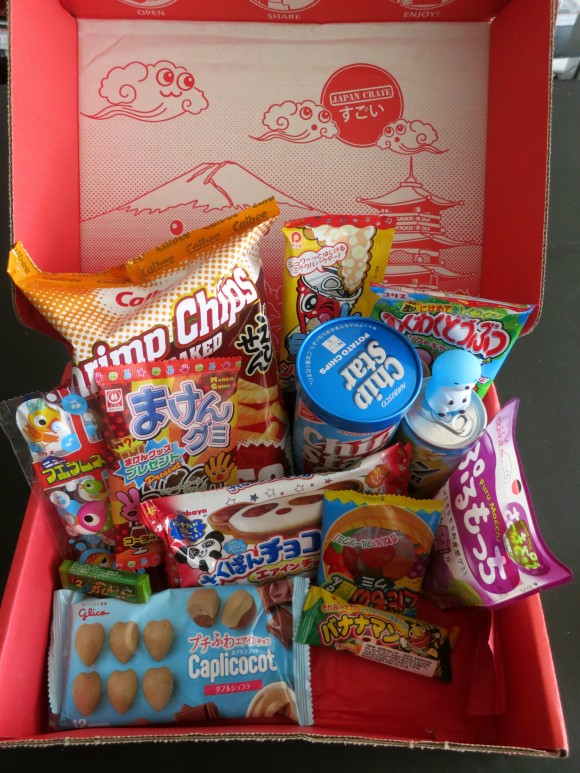 As usual Japan Crate includes a booklet / mini-manga that explains what everything is and has various additional content. A small plastic otter from AMUSE called Kawauso No Kotsume is the promised “make-up item” for past shipping delays. Whatever. On to the edibles.

Puru Mocchi Grape is the best of the three gummies this month, with both tart and sweet flavor overtones. I also enjoyed the variety, flavors and texture of the Fruit Shop Gummy  a lot. 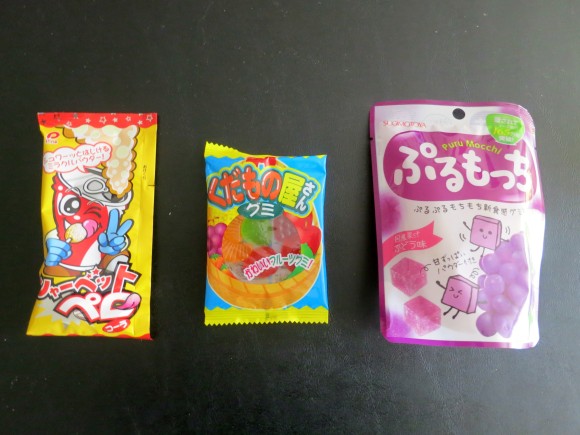 Sherbert Pero Cola  was described as a combination of Fun Dip and Pop Rocks, and that’s pretty accurate. The hard power style lollipop is cola flavored and the dipping powder designed to add a fizzy taste/texture. A unique, tasty candy.

The chocolate treats continue to shine, as the airy Caplicocot chocolate hearts and the panda decorated Sakupan Giant Wafer chocolate cookie were easily my overall favorites this month. 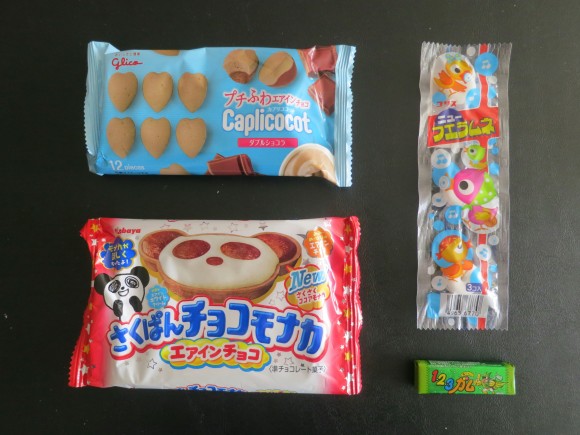 We got another version of Fue Ramune this month. They have consistency similar to mint lifesavers (though “break” easier when chewed) and taste strongly of the named drink. They are shaped to create a whistling sound for added amusement. 123 Green Apple Gum is exactly as the title implies, and fine for what it is.

Rock, Paper, Scissor Gummy has been sent before, but it’s still amusing and the cola flavor keeps it high in my estimation. 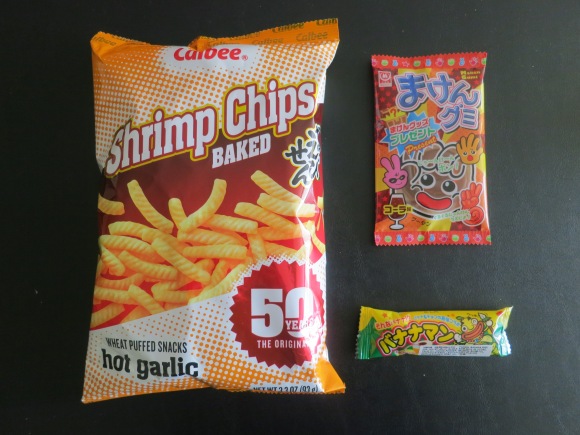 Chip Star Ebikoubashi and Calbee Shrimp Chips both feature the unique Japanese snack flavor. The former have the consistency of Pringles and are a nice variation. I’ve had the latter before, but not in the Hot Garlic flavor I received (there were four possible). Good inclusions here. 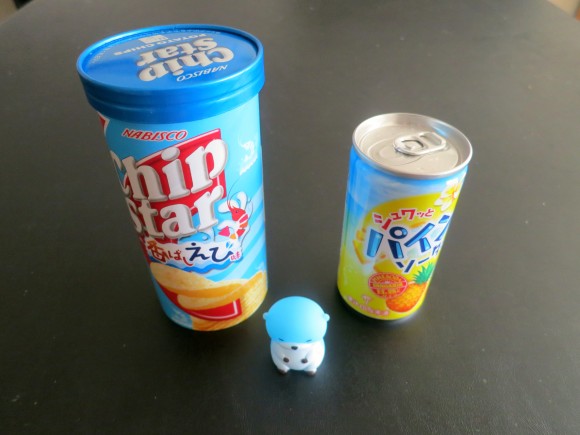 The Premium drink was Pineapple Soda. Nice, light soda that tastes as advertised. 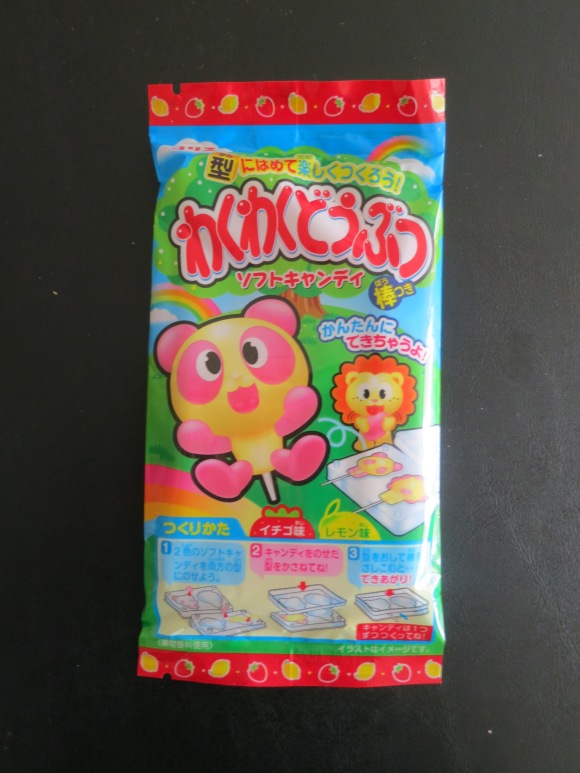 Waku Waku Zoo Animal DIY is one of the best DIY’s they’ve included. 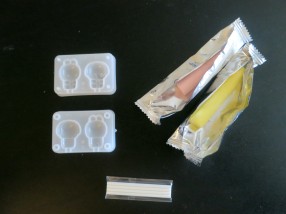 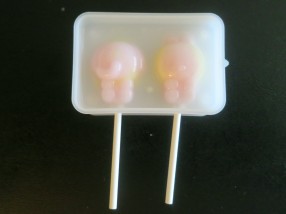 The strawberry and lemon “doughs” included were didn’t require any added water or mixing, which was nice. Just take them out of the package and place into the molds as desired. Add the lollipop sticks and close the molds for a few seconds and they make cutely shaped gummy lollipops they have a good, chewy texture. 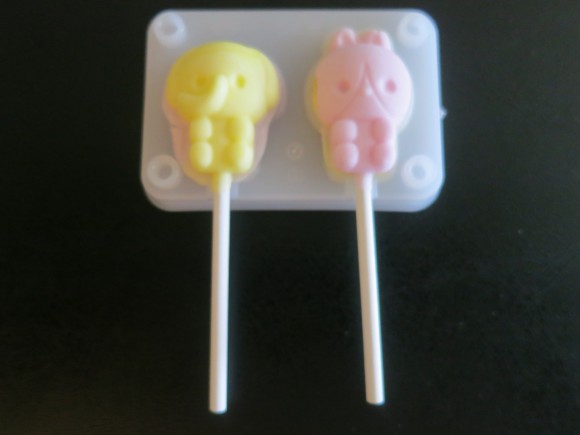 There was enough dough to make two “batches” (four lollipops) and experiment with the flavor combinations a bit. Very nice overall.

Wow, Such Banana?! is supposedly back by popular demand. It’s a banana shaped/flavored marshmallow treat filled with chocolate, if you can call a tiny thread running through the center “filled with.” The chocolate was tastable though and this wasn’t bad but I personally didn’t need it repeated so it gets a meh this time around, especially as one of the few Premium exclusives.

Good batch this month, with numerous original and varied snacks. I am getting a bit disillusioned with the Premium upgrades though, as they’ve decreased in number and are now containing repeats. The good news is they’ve just announced upgrades to the number of items and inclusion of brand name snacks starting next month (with Japanese Oreos).

This was the last crate of my subscription and I’ll likely have to stop soon due to budgetary restrictions, but I’m continuing at least one more month to check out the promised changes. I’m still enjoying Japan Crate a great deal overall a year into my experience with them.