This trade collects Rat Queens #11-15 and Rat Queens Special: Braga #1. There are a lot of layered story threads in Rat Queens. Best to start at the beginning. 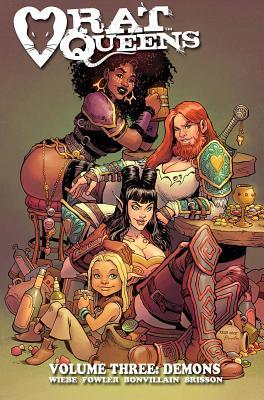 What a roller coaster this volume was. While the focus was firmly on Hannah and her family, backstory on the other Queens is also woven into the narrative. There’s a LOT of developments in the five core issues here, and a huge shake up to the status quo to close them out.

Previous story points are built on nicely, and a few times I got so caught up in the comic I wanted to scream at the characters. The many outstanding story threads makes the news that only one issue will be published after those contained in this trade before an indefinite hiatus for the comic. Here’s hoping it comes back soon.

I was a little worried about Stjephan Sejic’s departure, but while significantly different Tess Flower and Tamra Bonvillain’s art works quite well to continue Wiebe’s tale.

The stand alone special issue featuring Braga that closes the trade was ok, but raised more questions than it answered and the color palate detracted from the art.