“I cannot make that decision. Only you can.”

Mikado City has been plagued by random appearances by alien monsters they call Neighbors for four years. But an organization called Border has enabled life in the city to go on by limiting the places Neighbors can appear and killing them when they do, all thanks to adapting technology from the Neighbors’ own dimension to use against them.

High school student Osamu is just a trainee, but he’s determined to always do the right thing despite his limitations. And he may be at the center of some huge threats to the status quo, as gates start appearing where they shouldn’t and his new friend indicates that not all Neighbors are monsters. 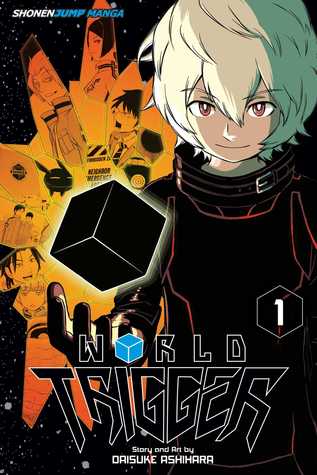 I’m finding it difficult to evaluate World Trigger. It’s riddled with typical Shounen elements and cliches, but has great world building and some flair that makes it feel somewhat unique and engaging. Osamu is the typical admirable-but-in-over-his-head protagonist, resented by his “superiors” for wanting to help despite being weak and accomplishing things he shouldn’t be capable of. The mysterious invading creatures fought by a targeted organization that employs high school students has been seen a hundred times, as has the enigmatic stranger. But Osamu has just enough to him to give hope for reasonable development in the future, and Yuma’s quirks are highly amusing and make him the star of the manga so far.

There’s nothing new in World Trigger, but it’s off to a decent start anyway. The world is intriguing and Yuma’s personality and the mysteries surrounding him are the hooks here. I’d be open to reading more and seeing how it all goes.