“Idiot. I’m not afraid. Not anymore.”

The undead roam the Earth as Shikabane and need to be put down for good. An esoteric Buddhist sect decides to fight fire with fire… 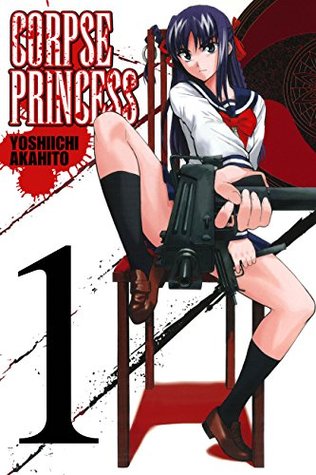 Apparently it takes zombies (with guns) to kill zombies. Corpse Princesses are different from the rampaging Shikabane because of their will to retain their humanity (although why that seems to exclusively apply to young girls is left unexplained). After personally defeating 108 Shikabane a Corpse Princess will supposedly go to Heaven, although considering the sect’s general view of them as tool to be used and discarded I have my doubts. The main character, Makina, is just getting started and has 100 to go as the manga opens.

Corpse Princess is the gorefest the title implies, with extremely graphic battles between Makina and the Shikabane. Since she too is undead she often takes as much damage as she deals, and limbs, etc fly in every action sequence. With a somewhat perverted monk as a partner there is fanservice here and there, but it’s not as prevalent as I expected from Makina’s pose on the cover.

There are some nice touches in the storytelling, including little character traits like Makina’s reluctance to enter school grounds as well as the gradual introduction of another possible main character (with atrocious luck) in background scenes. The artist is a little too fond of speed lines during action sequences, but otherwise the art is good and easy to follow.

Corpse Princess has some intriguing elements to it beyond the expected gore and creepiness. Unfortunately the latter is too much for me personally and this just isn’t my thing overall. Good for what it is though and horror fans should check it out.