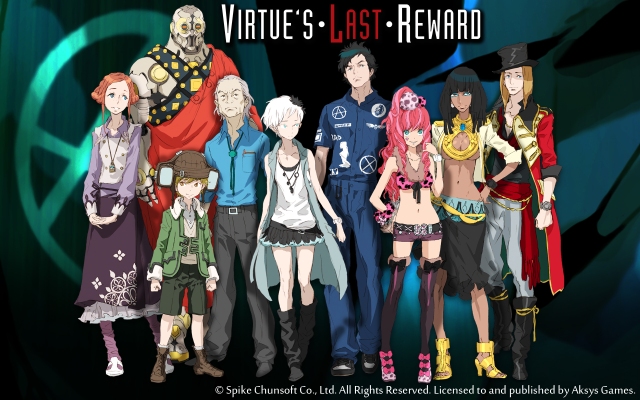 I loved 999, but hadn’t played this sequel yet due to glitching issues with the 3DS version. With the third game out and me now having a Vita, I decided to go back to this to finish the trilogy in order.

The general setup is largely the same, with nine people kidnapped and forced to play a life and death game at the whim of their captor, who is hinted to be posing as one of the nine. Once again the game is a combination of almost visual novel type story sections and adventure game style puzzle sections. There’s a very different feel to this versus 999, but the atmosphere is still appropriately dark and foreboding and things come together pretty well. The puzzles are good, the characters nicely varied and reasonably engaging, and the narrative compelling. When the game first came out I wasn’t a fan of the change in visual style from the first game, but I found now I barely even noticed. The game looked good and the graphics were appropriate.

The plot is intriguing, and makes good use of the branching aspect. I found the philosophical incorporations of both the Prisoner’s Dilemma and Schrodinger’s Cat quite interesting, but I’ll admit I’m a sucker for that kind of stuff in general. There’s a TON going on as things progress. Magnitudes more so than in 999. It leads to an end with almost too many twists, but I was fine with it overall (although I have mixed feelings about what this all means as a follow up to 999). The parallel branching nature does undermine some of the drama, as the Ally/Betray choices don’t have the same kind of impact when you eventually have to go back and choose the other.

There were a couple instances of “carrying the idiot ball,” but otherwise the characters’ reactions and motivations fit well among branches. A couple of things (mostly related to game’s workings) were left implied when they should have been made explicit, which is kind of surprising given all the exposition in parts. There were also a few instances of wasted potential, such as a clever development that should have had big implications but is instead used only when it’s introduced and never mentioned again, and a character who oddly fades into the background at points where they could/should have been important.

While not being quite as tight as 999 nor reaching the same heights, Virtue’s Last Reward is an excellent sequel that is more ambitious than its predecessor and largely succeeds on the grander scale. I don’t know that I entirely like where this is all going story-wise, but I am definitely fully invested in seeing how it turns out. Bring on Zero Time Dilemma.