As I mentioned when discussing last year’s Ichigaya shows I was able to attend, these shows from Gatoh Move are unlike anything else I’ve been to, and a lot of fun. The unusual venue and unique atmosphere are something any wrestling fan should check out at least once (preferably more 😉 ).

The Ichigaya events are held in a small room with no ring and two large windows on one wall which are removed for the shows. The crowd itself is effectively the “rope break” marker and the wrestlers will sometimes use the front row to bounce off of for “running the ropes” and the windowsills to jump off of for high risk maneuvers. The limitations of the venue restrict the action in ways compared to “normal” matches, but also provide opportunities for creative variations on standard wrestling elements.

As usual for Gatoh Move all the shows opened and closed with a song/dance performed by Emi, Riho, Kotori, Aasa, and Obi.

Pictures are not allowed during the show but can be taken afterward, so my pics here won’t contain anything from the matches and will only be of the roundtable and dancing following the shows (as well as of some of the great souvenirs I got).

First was visiting veteran Kaori Yoneyama against Gatoh Move’s resident rising star in Kotori. Decent pairing, and the story of Kaori trying to dominate and Kotori fighting from underneath provided a nice showing for the developing youngster. Basic but solid. Kotori’s charisma, enthusiasm, and talent stood out during my last trip (as I spotlighted here) and she’s clearly continued to polish and expand her skills  in the intervening year.

Next up was a 3-way featuring Antonio Honda vs Sayaka Obihiro vs Jaki Numazawa. This was a comedy match where after every 2-count the winner got to make a joke using a box of props off to the side. Those that the audience applauded received a point. Most points after a set time won. Pretty much every move done led to a 2-count, as the jokes were squarely the focus here.

Although it’s fair to note that not speaking Japanese put me out of the target audience for this, between not understanding the spoken parts of the jokes and having seen these exact three wrestlers in a similar match last year this fell flat for me and honestly was my least favorite Gatoh Move match of the trip. 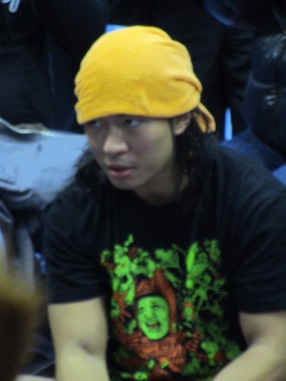 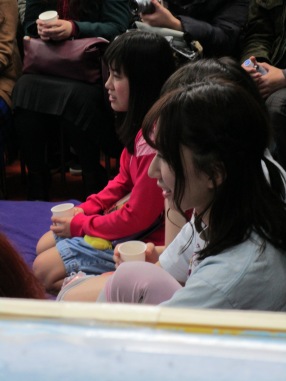 Speaking of similarities to last year, the main event of Emi Sakura & Masahiro Takanashi vs Riho & Aasa was amusingly close to the main event of the first show I ever saw at Ichigaya. It was the same except for having Kotori in Aasa’s place.

The rookie looked good here and fit in well among the more experienced competitors. Her pintsized powerhouse gimmick amuses me greatly and she already show flashes of brilliance in the way she uses it. Another solid match with exciting touches.

During the post show roundtable playing cards were drawn to determine teams for the next show’s main event, which ended up being tag team champions Riho & Kotori teaming with Aasa against Emi, Obi, & Mitsuru.

Amusing side note: during the opening dance for this show Obi accidentally (and unknowingly) bopped Aasa on the head with her mic. She continued to dance unaware as Aasa rubbed her head and mock scowled for those of us in the window who could see her. 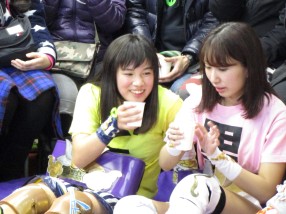 For this show I was sitting in front of the window most often used for jumping off of, etc, which ended up leading to quite a bit of ducking / moving out of the way as all three matches used the window heavily. Kept me on my toes. 😉

The undercard consisted of two mens matches, as all six of the core Gatoh Move roster were in the main event tag match. The opener of Madoka vs Toru Owashi vs Konaka Pehlwan was hard fought but with light touches of humor, mostly involving Toru. It was all kept in the context of everyone trying to win and everything clicked together pretty well. Case in point was the amusing finish. Toru was perched on windowsill (right above me) waiting for an opportunity to jump at one of his opponents who were fighting among themselves, but Madoka rolled Konaka up for the win and the match ended with Toru still in the window. Madoka and Konaka then left and a dumbfounded Toru eventually climbed down and headed out himself.

Masahiro Takanashi vs Cho-un Shiryu was a hard hitting match centered around the vicious strikes both men throw so well. Takanashi in particular thrives in this environment and knows how to make the most of it. Match went for the full ten minute time limit and ended in a draw, staying intense for the duration.

The main event of Emi Sakura, Sayaka Obihiro, & Mitsuru vs Riho, Kotori & Aasa was my favorite Gatoh Move dojo match this trip. Obviously they all know each other extremely well and have great chemistry together, which led to an thoroughly exciting contest with innovative multi person spots and use of the venue. Riho’s double knees to an opponent seated against the wall looks so vicious.

Towards the end Emi and Kotori tumbled out of the window into my (hastily vacated) seat. Kotori held Emi outside to prevent her from making a save as Riho pinned Misturu. Little things like that are excellent uses of the uniqueness of the environment.

This was a more serious show overall, as in contrast to all the other Ichigaya shows I’ve seen the middle match wasn’t a comedy match. I liked the variation, and actually would like to see this as the default rather than the exception.

The final Gatoh Move show of my trip started with a singles contest between rookies Aasa and Mitsuru. This was a strong showing and overall I was extremely impressed with both during my trip (especially for their experience). They’re both developing individual styles that suit them and I’ve very interested in seeing them continue to evolve as performers going forward. 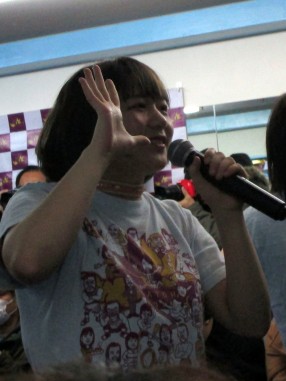 The formula of a competitive opener and main surrounding a comedy match was back for this show, and in some foreshadowing  Emi Sakura made comments about Antonio Honda and Kaori Yoneyama both being very hungry in her opening comments. This came into play in what I can only refer to as an “orange match,” where in addition to pinfall or submission one could win by placing an orange on a pedestal held by one of the audience members in the front row. Yes, really. There likely is significance I’m missing, but “mechanically” those were the effective rules.

Three oranges were tied up around the room. In between fighting  (which included the wrestlers selling getting hit with the oranges swinging on their ropes like getting punched straight in the face) the oranges were claimed one by one. But as either Yone or Honda went to place it on the pedestal to win, their hunger would get too great and they’d devour the orange instead.

About halfway into the match Aasa quietly came back out and crouched next to the front row, with a fourth orange tied to her head (and a hilariously neutral expression on her face). Later on Honda noticed and took that orange when Yone’s back was turned and stuffed it into his tights. With Yone thinking all the oranges were already eaten, she set Honda up for a splash and turned to get into the windowsill, at which point Honda pulled out the hidden orange and placed it on the pedestal for the win.

So this was BEYOND absurd, but somehow worked and ended up my favorite of all the matches I saw Honda in this trip. It wasn’t trying to be serious, and by embracing its own ridiculousness and being the only comedy match on the show it ended up quite amusing.

The main event was Riho, Kotori & Madoka vs Emi, Obi & Guanchulo. The latter team was somewhat dismissive of their opponents as well as taking some cheap shots here and there. Guanchulo was a bit over the top, almost cackling with maniacal glee at joining in with the slight heel tendencies employed by Emi. It was a different dynamic than the other six person match with Emi & Obi opposite Riho & Kotori and helped set it apart. It did make the match feel a bit lighter in tone, but it was still suitably competitive and the touches of humor fit and didn’t detract from the action.

Particularly memorable about this match was its creative finish with Madoka and Kotori tying up their opponents in horizontal holds, who Riho then used as stepping stones for momentum to perform a jumping double knee drop on Obi for the win.

Issues between Emi and Kotori continued to build here, including Emi showing disrespect after the match. Their interactions in the two six person tags seems to be leading to a future one one one encounter.

During the post show roundtable Kotori and Riho filled in the eye on a large Daruma (I didn’t catch what goal was achieved), and Honda’s birthday was celebrated with a cake. 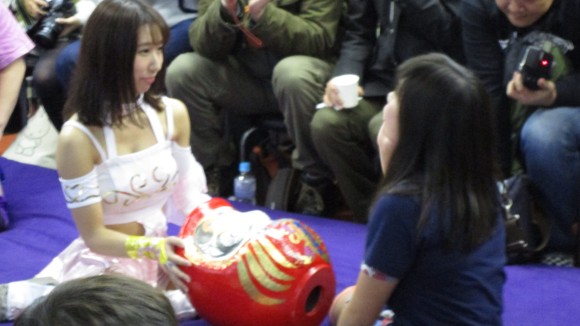 These shows won’t be for everyone, and I understand some of the criticisms I’ve seen of these shows and their matches feeling “samey” due to format limitations and repeated opponents. But I continue to be impressed as to what the wrestlers can do within those restrictions of the venue / style, and for certain fans (like me) there will great appeal in the nuances of each match and strength of the performers to mitigate those potential downfalls and make repeated visits a joy.

[…] and lack of ring) and how the performers use and adapt to it. For more detail see my previous reviews. Being summertime the building was a hotbox, but a slight cross breeze from the open window frames […]

[…] is a card featuring one of my favorite professional wrestlers, Mitsuru Konno from the Gatoh Move Gatoh Move  promotion. Mitsuru’s already showing great potential and instincts even with only a […]

[…] were wrestling, beyond even considering the fact that I saw this same pairing with the same result last year. Fine for what it […]

[…] a variation on a match I saw last year, Antonio Honda faced Aoi Kizuki in a special match for New Year’s involving trying to […]

[…] a little more focused and honing her skills even further. She was equalling impressive in the three other matches I saw her in that trip, including a fantastic 6-woman tag including the entire expanded core Gatoh […]

[…] characters was a card featuring one of my favorite professional wrestlers, Mitsuru Konno from Gatoh Move. I thought Juri’s style would be perfect for this and it came out far beyond my high […]

[…] Takanashi and Cho-un go to a time limit draw on New Year’s Eve has become something of annual tradition, and to be honest one I was a bit lukewarm on last year. I feel like they pushed […]

[…] in this batch was also the first of all. Juri’s first rendition of Mitsuru Konno from Gatoh Move for me featured a great action pose capturing and combining Mitsuru’s strength, […]