Always a solid choice to open with the crowd pleasing Dillinger. Sanity has an odd dynamic, as they seem to be protecting (or limiting the ring action of) the big men, so it’s their leader who gets into the singles matches. It would have made more sense for Dillinger to have to work his way through the minions to get his hands on Eric.

Eric tosses a jacket at Tye and gives him one last chance to join. Dillinger picks up the jacket, but then nails Young instead of putting it on. The dynamic is Dillinger doing his best to outclass Young and stay one step ahead of the monsters on the outside, but occasionally succumbing which is when Young takes over. It was well done for the most part, but went too long with too many instances of interference. In particular, I hate when people come into ring but don’t get DQ’d. Even given Tye hit them instead of getting hit, Dain came into the ring on his own in full view of ref.

Sanity’s numbers would figure into the finish as well, as the Tye-breaker was foiled by Wolfe putting Young’s foot on rope. Tye then performed a tope to Wolfe & Dain to finally take them out, but got caught with Young’s wheelbarrow into a neckbreaker when he goes back in to give Young the win.

The heel turn has done Cien a lot of  good. He seems more comfortable and confident, and the aggressive edge to his character gives him the hook he was previously lacking. It’s odd to see Strong as a face, as before Aries’ injury he was set up as his partner, but he’s making it work. Solid story conveyed by the announcers of two guys with chips on their shoulders.

This was the best I’ve seen from Almas so far, and Roddy’s looking motivated and sharp. Was surprised by Strong’s win, as I expected Cien to go over to justify the new attitude. Both needed it though, and Strong being built up makes more sense given what was to come.

The challengers were dominant early, but DIY fought back and lit things up to the crowd’s delight. This was all about AoP’s power against DIY’s perseverance and experience. The match was better than I expected. AoP showed just a little vulnerability, which made all the difference and helped DIY make it believable that they could beat their larger challengers.

Gargano and Ciampa were clearly bouncing all over and working their asses off to make their opponents look devastating so it’ll be interesting to see what AoP can do against other teams, but the big men held up their end of things and this was by far their best outing to date. There were several nice end teases, including a variation on how DIY won the titles with AoP powering out of what the Revival couldn’t escape.

In the end AoP were too much and the Supercollider set up the Last Chapter for the titles. Exactly as I as expected (and feared) here, but it makes sense. Defeating the monster heels for the first time will mean more with them being beaten for the titles.

As the announcers discuss what just happened behind them in the ring Rollins invades Takeover to call out HHH!!! Nice surprise to add unpredictability and finally address HHH “hiding” in NXT. HHH comes out of the back, but sends security after Rollins instead of facing him. Rollins dispatches them and tries to storm the back, but another group swarm him and force him out (to a big “bullshit” chant from crowd).

I liked this a lot and it adds much needed heat to the Rollins/HHH program, but I hope it doesn’t kill the crowd for the Women’s match. 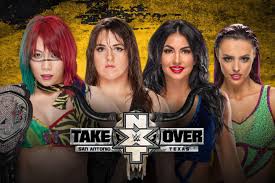 The video package explaining the match unusually misses important context in not really conveying that it looked like Cross was going to save Asuka from the Aussies when she attacked the champ instead. Makes Cross’ presence in the match less logical.

This was a real mixed bag. All four athletes were showing tremendous effort and there were some great highlights like Asuka’s double German on the Aussies, a straightjacket neckbreaker from Cross (that should become a trademark move of hers), Cross taking the double suplex through a table, etc.

On the other hand even with three opponents, Asuka never felt like she was in any jeopardy of losing the championship. And the underlying story with Kay and Royce was incredibly stupid. If they don’t care who wins the belt, why did they never cover each other while both Asuka and Cross were down? Or submit to one another, which could’ve given one of them the title in under a second before Asuka could do anything about it? There needed to be a moment where one of them revealed she really did care about getting the belt for herself to make the lack of those things acceptable. They didn’t need to turn on each other, just show enough selfishness (even behind the other’s back if need be) to help the story make sense.

None of the above is the fault of the wrestlers (as I’m certain Takeover is booked down to the tiniest details), but it did take away from their ability to engage the crowd and tell a compelling story. There were also pacing issues, such as Asuka having to be down for a ridiculously long time on the outside after nothing major while the Aussies and Cross brawled to the announcers’ area for the big table spot.

After said destruction of Nikki, Royce and Kay went back to attack Asuka but the champ eventually fought them both off and nailed Peyton with a big kick for the win. On her way out a still incapacitated Cross smiles at her.

This was flashes of great action with nothing connecting it together, and ended up feeling like a placeholder to stall the singles match between Asuka and Cross. I recently wrote about Asuka’s time in NXT so far and said I didn’t feel like she was a division killer, but if NXT continues to be unable to shake the forgone conclusion feel of her matches even when it’s 3 on 1 I may have to reconsider that opinion. 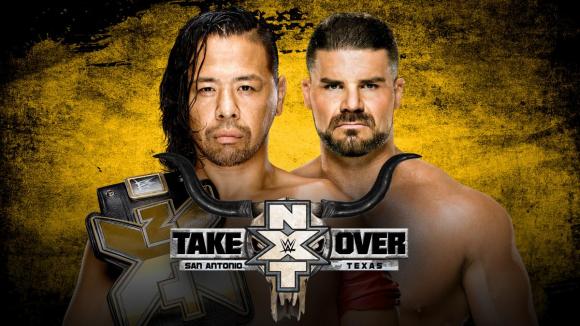 Roode thinks he’s Ric Flair now, doing the four women on each arm entrance. It suits him, and is much better for a heel than the choir (although that was admittedly a fantastic spectacle). Not to outdone, Nakamura rides strobe light to the ring.

The atmosphere is electric, not only from the big fight feel of the matchup but the incredible charisma of both men. “This is Glorious” chant from the crowd just from the pre-match staredown.

The story and pacing of this match were pitch perfect. From highly amusing pose offs and mindgames  (“Glorious vibrations” was hilarious without breaking the flow/tension of the match) to wonderful old school heel stuff from Roode to excellent character work and action from both.

They built drama throughout the match, including a FANTASTIC false fall from Roode playing dead to foil Shinsuke’s first Kinshasa attempt. The endgame done incredibly well (despite my dislike for getting trainers involved in angles). They had the crowd going insane when Shinsuke nailed the Kinshasa but couldn’t cover, then decided to fight through the knee injury just to have Roode spike him with the DDT. The kickout there shocked everyone. Roode then continued his heel clinic by applying a half crab and punching the injured knee in the hold. Nakamura kicked his way out but another DDT gave the Glorious One the NXT title. Just WOW. They pulled the trigger on Roode in big way here without making turning him face or making Nakamura look weak. Brilliantly done.

This was one of the weaker NXT Takeovers on paper, but commitment and effort up and down the card meant even when thing didn’t quite come together there were bright spots to enjoy. Also, the main event was phenomenal. Recommended.