The Zero Escape trilogy comes to a close with a departure from the Nonary Game. Life and death are on the line again, but this time in a deadly Decision Game…

Zero Time Escape is a direct continuation of VLR, features numerous characters from first two games, and ties up plot threads running through all three games. While ZTE does a good job of summarizing important points from previous games I feel a ridiculous amount of important context would be lost without having played the others first, so I highly recommend not starting with this one.

In an effort to remain as spoiler free as I can while still getting into detail about what I liked and didn’t about the game, I will avoid using character names as I discuss things to prevent spoiling elements of 999 and VLR. 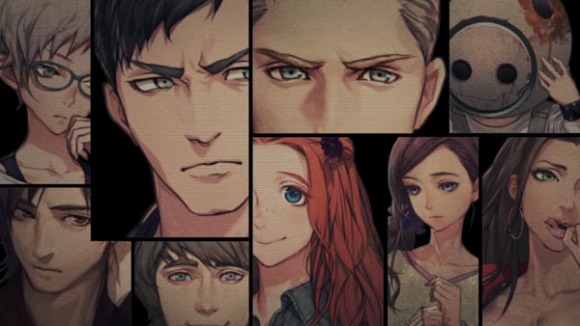 9 Hours, 9 Persons, 9 Doors remains one of my favorite games of all time, and I was pleasantly surprised that while not quite up to 999 its sequel Virtue’s Last Reward was still an excellent game that continued in the vein of the first in fine fashion.

I mentioned in my review of VLR that I wasn’t sure I liked where everything was going storywise, and while I couldn’t possibly predict what I was in store for here I was in some respects both right and wrong to be trepidatious. In classic form ZTE’s greatest strength is also its biggest weakness: its ambition. In attempting to be more mysterious and mind bending than 999 and VLR, tie up three games worth of reality twisting plot,  AND introduce no less than FOUR major shake ups to the gameplay formula it was bound to collapse under its own weight at points.

Let’s start with the changes to gameplay. Changing the nature of the game our protagonists play is expected and needed, and the specifics of the Decision Game are reasonable enough (if contrived at times).

Two of the other big changes go hand in hand. The group of nine this time is divided into subgroups of three people. These divisions are preset, so the player has no control over who gets paired with whom. The player will jump from one group leader to another throughout the game, temporarily controlling that character for the duration of the chosen “segment.”

The concept of segments is the other big change that ties into this structure. The Zero in control of this game gasses the characters after each game and erases their memories. So things do not unfold chronologically. The player chooses one of the segments available for the team they feel like playing and get a chunk of the story (with appropriate decisions and puzzles) which could be anywhere in the timeline flowchart. The flowchart is filled in as these are completed so long term you can see how things are coming together, but between playing things out of order and jumping between different point of view characters constantly the flow and immersion of the game is severely hampered.

Another drawback of having three isolated teams is the timelines being traversed are no longer a full exploration of the various combinations of choices made. The first two games used choices made by a single character as branching points, and as such were able to fully consider the consequences of those choices. Here it simply can’t be done due to the unwieldy number of combinations. So as the chart gets filled in there are particular combinations that are simply not represented. Now the story is certainly big and complicated enough as it is, but having “gaps” surprisingly makes the game feel more “linear” and out of the player’s control in a way despite the looser structure of choosing fragments.

With all that said, everything from the amnesia approach to the point of view jumping has an in-game, story based explanation and reason. That makes it all more understandable looking back once finished with the game, but it doesn’t necessarily make these aspects more enjoyable while playing.

Which brings us to the last major shakeup in gameplay. Progression from certain branch points are determined by chance. That’s right, there are points in the game that have to be played over and over until the game chooses to give you the result you need to get on the other branch and proceed. This is beyond ridiculous and annoying. Again, there is a important story related reason they needed to be there, but there had to be a better way to address and implement them.

Having to explain these complicated points in such detail to properly convey my issues with them likely gives the impression that I didn’t like the game (and that impression will no doubt grow when I start dissecting the story). But that’s not the case. The mysteries are compelling, the atmosphere appropriately tense and harrowing, and the puzzles and gameplay decisions interesting.

As for the story, it’s insane in scope and yet still manages to come together nicely and ties up the trilogy rather neatly in the end. The philosophical aspects get more and more captivating as things go along, and the numerous different threads intersect in jaw dropping ways.

The biggest problem with the scope is some important things invariably end up being underexplained. I have particular problems with the characterization of one person from the previous games whose actions and reasoning are inconsistent and inadequately justified. Things with this character happen for the sake of the plot of VLR, and result in erratic, unlikeable behavior. The writers also try way too hard to be clever, and at least one of the many shocking reveals is more groan inducing than interesting.

Yet everything is internally consistent (both within ZTE and with what has come before), most of the characters have good depth and are suitably intriguing, and some of the reveals are legitimately brilliant and engrossing. It’s harder to talk about what I liked in the story without spoilers, but there was more than enough here to keep me engaged until the end.

So I have major mixed feelings about Zero Time Escape. It’s easily the weakest in the series, most of the changes attempted fell flat for me, and I wasn’t happy with some of the story choices. On the other hand it juggled an insanely complicated plot reasonably well, felt like a Zero Escape game with all the puzzles and mind bending mysteries that go along with it, and had some legitimately compelling characters and twists.

Definitely worth playing to close out the series, but it wears its flaws on its sleeve much more apparently than 999 and VLR.

[…] I played a video game (Zero Time Dilemma) that bucked that trend for me in that I both liked and disliked in pretty much equal measure. That […]

[…] 9 Doors remains one of my favorite games of all time. Virtue’s Last Reward and Zero Time Dilemma were solid follow ups to round out the Zero Escape trilogy and quite good in […]