Last year at New York Asian Film Festival I went to a screening of the wonderful anime film Miss Hokusai. This year’s NYAFF is winding down and yesterday I saw the Malaysian action movie Mrs. K.

Note: I general try to keep reviews relatively spoiler free, but I will be addressing some general trends and developments in the plot here. 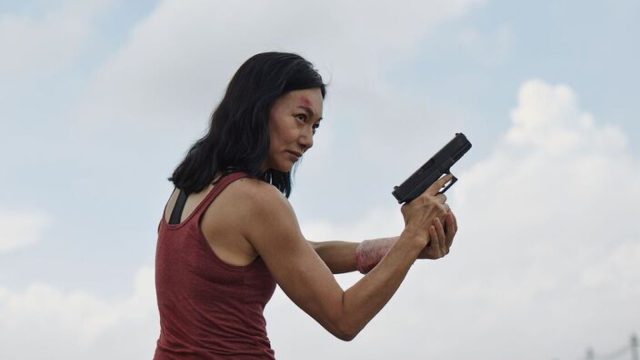 Although admittedly previously unfamiliar with star actress Kara Wai, it’s easy to immediately recognize the experience and skill she possesses once she takes the screen. Her portrayal of the titular housewife with a secret past is nicely nuanced and shines in the early portions of the film when she’s confidently displaying a dangerous edge lurking below cheerful, comedic moments. If this is indeed her last action role, in a lot of ways is an appropriate one to go out on. Particularly affecting are the downright BRUTAL fight scenes, loaded with hatred and really feeling like the characters are trying to kill each other instead of the dance like choreography sometimes used that would have been horribly out of place in this film. They’re uncomfortable to watch in parts, but perfect for the story and extremely well done.

The acting is excellent in general, with the supporting cast matching Wai’s level in their portrayals of both friend and foe. I’d like to give special mention to young actress Siow Li Xuan, portraying Mrs. K’s daughter in a role that required a delicate balance of determination and fear. She’s does an incredible job and seems like a big star in the making. Her perilous situations and the accompanying danger is one part of the tense atmosphere the movie generates and maintains with intimidating villains, slow building dread, and harsh confrontations.

The plot is where I think the previously mentioned excellent elements are let down. Specifically in the lead role. The idea seemed to be a return to her old ways for the titular Mrs. K when her past comes back to haunt her. Several descriptions of the movie talk about “a woman who will do anything to protect her husband and daughter.” The problem is she’s entirely reactive in her efforts to deal with the threat (which she initially underestimates, somewhat causing the problem in the first place), and largely ineffective in what she does attempt. In a lot of ways she’s as much a victim as her kidnapped daughter. Yes, she puts up a hell of a fight at every turn and shows great devotion to trying to set things right, but her daughter is a hundred times more proactive in trying to get away than her mother is in trying to rescue her and the biggest hero moments of the film are given to Mrs. K’s husband (a gynecologist who’s only previous familiarity with guns or violence came from being taught by his wife).

I’ll stop there to avoid even more explicit plot details, but the story progression seemed off overall and changes to either a few of the resolutions or more explanation of why characters acted as they did would have done wonders. There were also few instances of the antagonists’ actions not making a whole lot of sense, seemingly for the sake of having a cool scene, and the pacing felt uneven to the point of distraction in places.

It’s a bit of a shame, as again things like the daughter’s personal arc, the visceral, brutal fights, and imaginative, striking visuals are excellent. And Wai’s performance as Mrs. K’s is fantastic. I just can’t help but think of how much better this could have been with some tweaks to give her more to work with and make the main character’s story and struggle as strong as the actress playing her.