This is Nathan Garret’s second adventure. It’s a complete story on its own, but does build off of events in Crimes Against Magic (book 1). Better to start there.

Nathan Garrett’s former identity is dead and buried. But when a case he takes for a friend recalls elements of one from his past involving an evil even Hellequin had trouble with, Nate might need the edge and ruthlessness he once had. 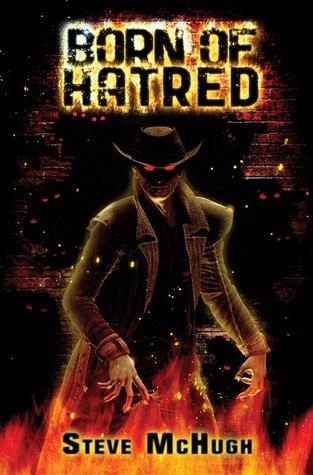 This second installment if the Hellequin series is slightly more straight forward than the first, with fewer surprises and more full blown exposition. However the disparate mythologies blend even better here and a great batch of new characters carry things along nicely. We find out more about Nate’s world, the different creatures that inhabit it, and the societal structures that go along with it all. I really like how things are developing in a world building sense.

The past admittedly still somehow drags compared to the present despite a lot of action and danger. It does pick up eventually and everything comes together nicely in the end but it is a small mark against the book as it’s roughly divided in half between past and present and one is far more interesting than the other. Overall it feels very different from Crimes Against Magic, but I enjoyed Born of Hatred just as much and it continued to establish Hellequin as one of my favorite series.

[…] to not to start here – go back to Crimes Against Magic (book 1). Also see my reviews for Born of Hatred (book 2) and With Silent Screams (book […]