Seeing Ice Ribbon at Korakuen Hall is always a treat, and one match in particular had me even more excited that usual for this event.

The International Tag Ribbon championships were in limbo at this point due to co-holder Tsukushi’s hiatus (legal trouble related, exact details withheld since she was a minor in Japan at the time). She’s since returned in a limited, non-wrestling role with a public apology and the titles have been vacated. Her partner Kurumi was scheduled to team with Manami Toyota on this show to face #1 contenders The Lovely Butchers (Hamuko Hoshi & Mochi Miyagi) in a match that was speculated to have title implications, but Kurumi was injured shortly before resulting in shuffling around of the card. Kurumi was at the event working the merchandise tables and in good spirits, and I hope she recovers/returns soon.

Hamuko Hoshi’s new match ended up being against her recently debuted daughter Ibushi Hoshi, and they opened the show.  This was one of many matches on the show that were more about a less experienced competitor putting up a good fight in defeat than having a believable chance of winning. As such I was hoping that Ibushi would be allowed to show a little more against mom, but it was a fine opener all the same. I’d actually really like to see a longer, more competitive rematch in the future. 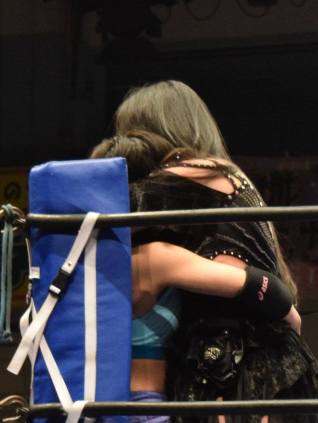 A second match with the same dynamic followed as another new roster member Asahi debuted, playing the role of totally overmatched but determined underdog well against legend Manami Toyota. I thought this worked a little better, with the confident, somewhat dismissive Toyota acting more and more surprised at Asahi’s resiliency and the length she had to go to in order to beat the upstart. Tsukka and others cheering on Asahi excitedly each time she got a little edge on the veteran or survived a pin attempt added a lot to the atmosphere. 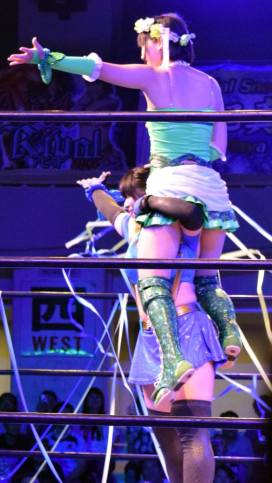 Miyako & Jun Kasai were involved in a triple threat tag, which of course meant plenty of shenanigans. Their opponents were regular team Kyuri & Maika Ozaki and makeshift team of  Mochi Miyagi and the visiting Yoshiko from SEAdLINNNG. I could do without Yoshiko ever being in Ice Ribbon but, as I discussed a little in my review of SEAdLINNG’s show from a few days before this, I’ve hesitantly decided not to avoid shows she’s on or her matches. Her presence can provide an additional barrier for me to really get involved in a match though. I found it in mild effect here. She does play her role well and the story of her adopting Miyako’s antics to antagonize the latter gave the Dancing Queen plenty to play off of.

The match was amusing, never talking itself too seriously but still providing a good deal of action in between things like water gun and aerosol can fights. One of my favorite things here was Kyuri slinking off during said silliness and quietly taking a seat in the bleachers among the crowd (right behind me) and contently watching her opponents battle with a self satisfied expression on her face. Of course since this was a tag match she was kind of abandoning her partner, but sacrifices must be made in water gun wars I suppose. 😉

Eventually Miyako was Miyako and got annoyed with Kasai, unwisely provoking her partner physically and getting leveled by him. This left her easy pickings for Yoshiko and Mochi to finish off for the win. During this Kyuri and Maika got on the apron and were casually knocked back down to take them out of the equation. I personally really like their team and wish they weren’t treated like cannon fodder for the other teams here (and in general). Regardless of that and my least favorite team of the three winning, this was again decent and fun overall.

It’s great to see Akane Fujita back in full force from injury, and she seems to be carving out a nice niche in hardcore matches. Against the veteran KAROU from Marvelous in one here I expected this to be another “valiant effort in defeat” story, and while in some sense that’s exactly what we got Akane looked Karou’s equal and had the crowd primed for an upset at several moments.

The ending was a bit weird. Karou misted Akane in the eyes while they were fighting on a ladder then floated around to hit a powerbomb for the win, but Akane sold the mist by acting stunned instead of reacting much (which initially made it hard to tell what had happened). She then rolled right to her knees after being pinning instead of selling the effects of the powerbomb, making the whole sequence feel odd. Otherwise this was a very good hardcore match with strong work from both, including a gorgeous moonsault by Karou from the very top of the ladder and them brawling right through my seat on the outside.

During my first trip to Japan in 2015 I was lucky enough to see some of my favorite wrestlers battle for Ice Ribbon’s International Tag Ribbon Championships at Ribbonmania in a match that immediately became a favorite of mine and I consider the teams involved two of the very best in the world. Seeing some of the best of three series of rematches (one hosted by each wrestler’s home promotion) between Best Friends (Tsukasa Fujimoto & Arisa Nakajima) and Avid Rival (Misaki Ohata & Ryo Mizunami) was the impetus for this trip. 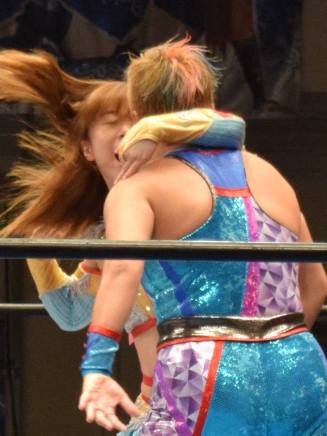 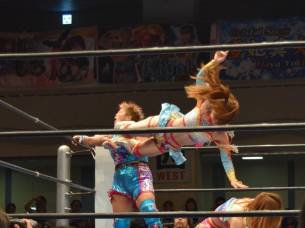 This was the last of the series, with Avid Rival up 1-0 (after winning at Wave on August 12 and wrestling to a time limit draw at SEAdLINNG on August 24) and the teams even overall counting the 2015 match.

This match being just prior to intermission and a little early in the card for its magnitude is likely due to Avid Rival needing to make it out to Osaka for a Wave show that evening. Both were out the door and on their way as soon as intermission started. 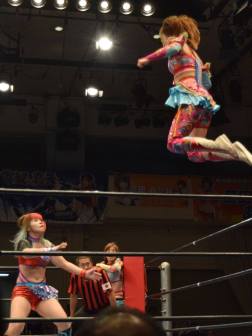 The time limit draw at SEAdLINNNG was great, if just a touch below the original match that inspired this series. This one is neck and neck with the original, and a fantastic way to close things out for now. I was actually partially anticipating the “upset” victory and Avid Rival sweeping the series given the way difficulties between Best Friends were being stressed, leading to somewhat of a feud between Tsukka and Arisa. But them coming together on the same page as a team to dig down and prove they could still win was an equally satisfying story.

One great thing I’ve noticed in Avid Rival’s development over time is the way they add and modify actual double team moves in their arsenal (in addition to having awesome versions of the also great rapid fire alternating offense a lot of Joshi teams rely on). It makes them feel more like a cohesive unit and gives a sense of evolution.

Much like the first time Best Friends beat Avid Rival, they exchanged fantastic hard hitting offense with a lot of close calls until Tsukka and Arisa were finally able to just keep wearing someone down with a succession of their multitude of individual finishers. This time it was Mizunami that finally fell to Tsukka, and Misaki consoled her partner after the loss.

In a nice touch for the way the feud had been built (with the opposing team members all being quite tense and in each others faces about who was better) there were no handshakes afterwards, just smug looks from Best Friends and grudging acceptance from Avid Rival from a distance. Can’t recommend this match (and the whole series) enough. Hope to see the one I haven’t (and the only one Avid Rival won) from Wave soon. 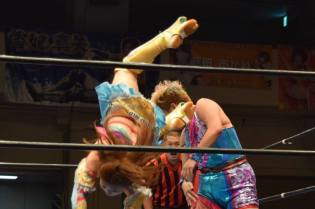 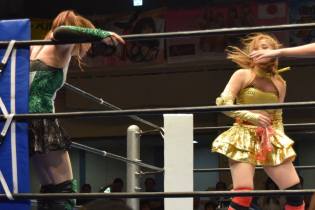 I was a little late coming back from intermission and unfortunately missed the begining of the big blow off elimination match featuring Team DATE (Nao, Nori, Hanna, & Karen) vs Maruko Nagasaki, Tequila Saya, Uno Matsuya, & Satsuki Totoro. As such Hanna was already eliminated and on the outside (and seemed to be nursing a knee injury of some sort) and I came in just as Uno also left the match. Uno’s actually my favorite on that team and I wish she was featured a bit more in general.

Even coming in partway, what I saw was excellent and this was my second favorite match of the night. Everyone was constantly fighting as appropriate for the intense rivalry that has been the cornerstone of the feud. This was my first look at any of the DATES as well as Totoro and even though the nature of the match meant not everyone got a lot of chance to shine they all looked good and payed their roles well. Nao and Satsuki went next (and in rapid succession), leaving Saya and Maruko against Karen and Nori. Nori and Saya had been mostly paired off throughout the match, and they had some really good exchanges in this section until Karen and Nori were able to isolate and eliminate Saya, leaving Maruko in a 2 on 1. 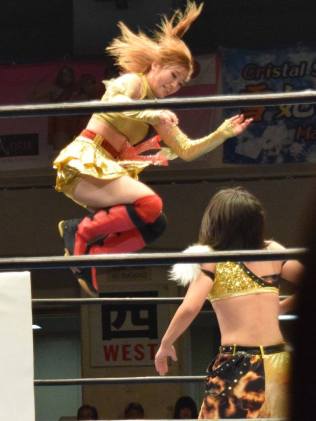 The most experienced of Ice Ribbon’s rookie team persevered to eliminate Karen to even things up and eventually get the better of Nori (in a really good final section) to win for her team. This was 100% the right outcome, as the building story had been the DATES’ dominance and this last battle was Maruko and company’s final chance to prove their equals and gain some respect. Great story, great match. Nori impressed me the most here, and I hope to see a lot more of everyone involved going forward. 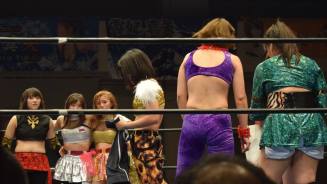 After the match Maruko’s team seemed to head to the back without any consideration for their finally defeated rivals, but they came back with Ice Ribbon jackets for Team DATE instead, finally fully accepting them into the roster and leaving things peaceful and in a state of mutual respect between all eight wrestlers after the feud’s end. Again, really well done. 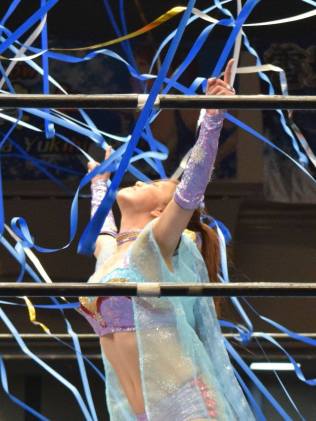 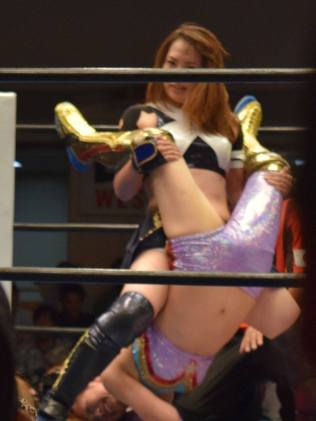 The main event saw Azure Revolution do battle as Risa Sera (c) defended her ICE Cross Infinity Championship against her partner Maya Yukihi. I’ve commented before that I think these two have better chemistry as opponents than as a team, and it continued here as they had a very good match overall. 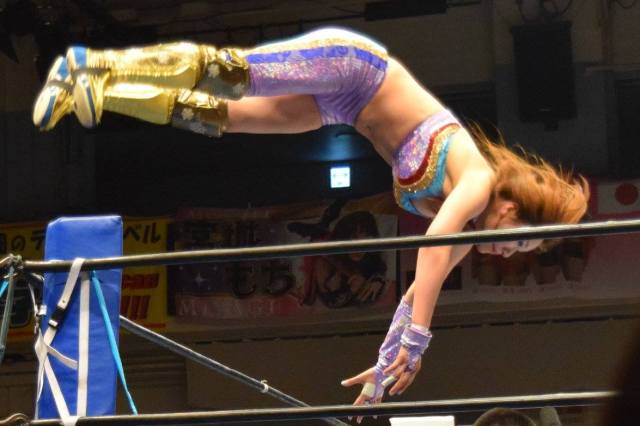 But Risa’s defenses always seem oddly paced to me, as if she just doesn’t quite know how to smoothly build matches once they get past a certain length (with the same opponent that is, her multi-opponent ironwoman matches are great). Also, with the story of Maya trying to prove herself by defeating her more decorated, respected partner this needed more urgency. Given the story (not to mention Maya’s new gear) I was surprised at the result, but I also think Maya’s not quite ready for a title run and she’ll certainly have future opportunities so Risa overcoming this challenge and continuing on as champ works just fine. 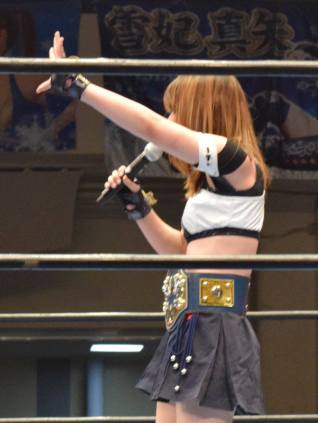 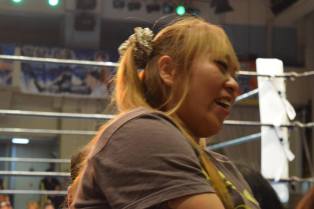 A lot of this show was a bit “by the numbers” booking-wise, but there were a couple of surprises and predictable is perfectly fine if done well, which pretty much everything was. Having an underdog (ideally Akane) win one of the “proving ground” story matches would have been so nice since there were several, but that’s a mild criticism. Overall this was excellent, and in addition to the tag match I will continue to gush about forever the whole show is well worth checking out. 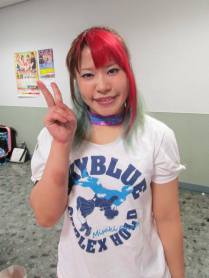 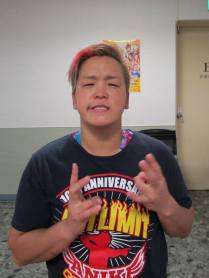