I was lucky enough to spend two and a half weeks in Tokyo to close out 2015 / start 2016, during which I saw 17 shows from 8 promotions with 84 matches featuring 144 wrestlers. The vast majority of it was extremely good, so it was VERY difficult to cull down to 5 or so matches. There are a lot of worthy wrestlers and matches that won’t be mentioned here.

Match reviews copied from my show specific blogs when possible.

Paksa and Riho vs Emi Sakura and Masa Takanashi

This was another great main event in a series of them from Gatoh Move. What helped set this one apart is that it was at their Ichigaya location. I’m incredibly impressed with what they can accomplish wrestling-wise in such a small space with no ring. This held its own with some of the best matches I saw my entire trip.

This match was scheduled to be Miyako Matsumoto and Tsukasa Fujimoto vs Azure Revolution (Risa Sera and Maya Yukihi). I was looking forward to seeing two of my favorites team against an established duo, but it wasn’t to be (and I have no complaints about how things turned out). As the match started Miyako got the mic and apparently had some complaints about teaming with Tsukka. She grabbed Risa and rebooked the match herself through force of will and it became Miyako Matsumoto and Risa Sera vs Tsukasa Fujimoto and Maya Yukihi. Classic Miyako and it led to a ton of amusing moments. Tsukasa’s face when Miyako offered her the traditional pre-match handshake after ditching her was priceless. Tsukka’s incredible in every aspect of pro-wrestling and it was a treat to see her so many times during my trip.

There was an ongoing stipulation where the ring announcer would state a letter, and pinfalls could only be attempted after a move starting with it. One of the highlights of it was Tsukasa and Maya pulling out Miyako’s own Mama Mia on her, then an irate Miyako retaliating with Super Mama Mia once the letter changed. Miyako was easily one of the most entertaining parts of my trip, as she knows exactly how to work her gimmick for maximum effect and amusement. Her running laps around the ring in excitement as a victory celebration (with Tsukasa trying to trip her on each pass until successful) was magnificent. 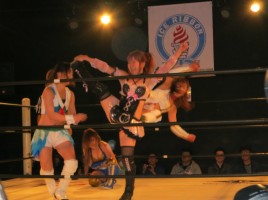 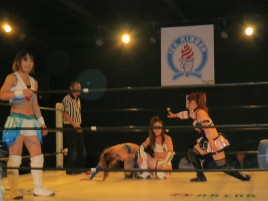 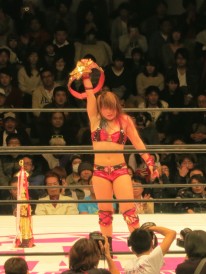 This was fantastic, with highlights that included Io performing an INSANE moonsault off of a staircase overhang, and of course the end which saw Stardom’s biggest star capturing their main title from an outsider. 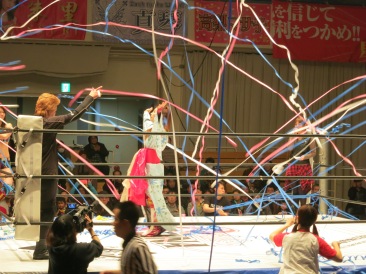 This was originally advertised as the main event of its show, and honestly should have been. Even the ring announcer seemed to be going off old notes, as it was announced as the main instead of the semi-final. Tsukasa Fujimoto is incredible, and easily one of my favorite wrestlers in the world. She can do comedy, but is at her best when going all out in no-nonsense competitive wrestling. 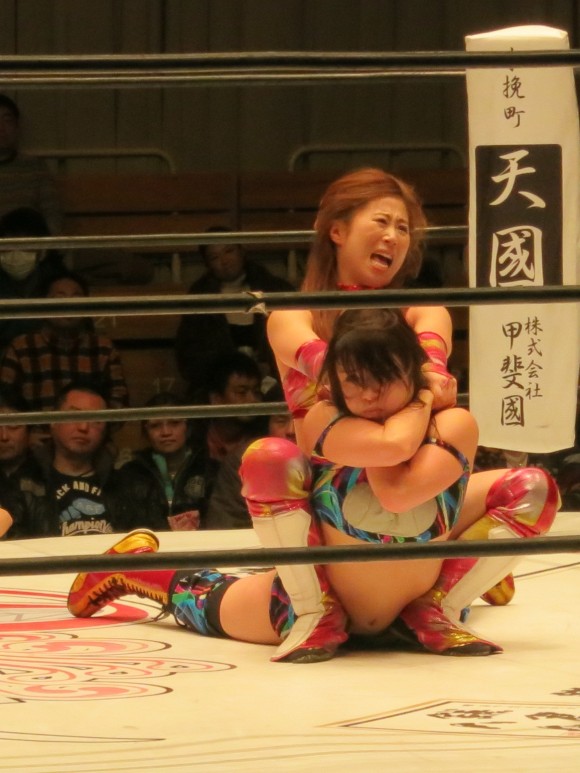 Thankfully that’s what we got here, as she and Maki went to war for the REINA title (after some early mind game attempts by the challenger). This was my first (and likely only) time seeing Narumiya, who definitely impressed. She kept up with Fujimoto brilliantly and it’s a shame she’ll be retiring soon. 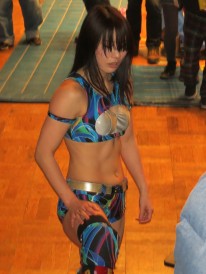 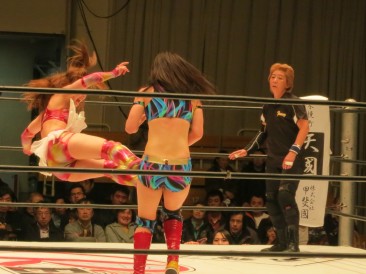 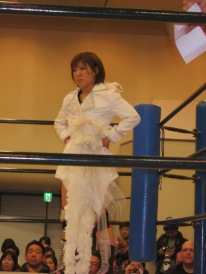 Simply phenomenal. They beat the high holy hell out of each other, with forearm shots that thundered through the crowd. Haruyama’s guillotine leg drop from the top rope with Arisa standing on the second is one of the most brutal looking moves I’ve seen, and I was totally marking out for every German suplex variation they threw at each other. Was extremely lucky to have seen a few of Haruyama’s last matches, and Arisa was everything I’d heard and more. 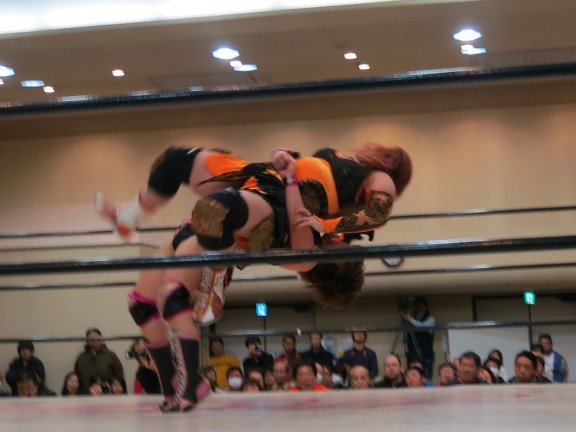 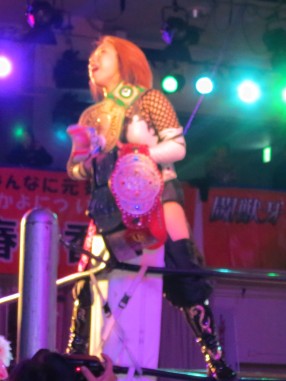 This was perhaps the most anticipated match of my trip, and it did not disappoint. 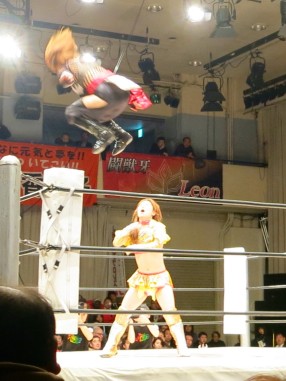 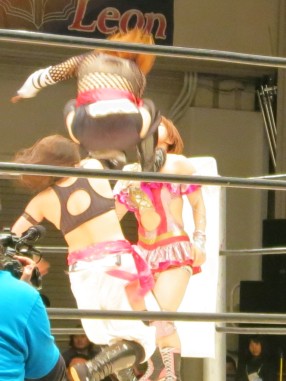 I’d only seen the Jumonjis and Arisa once before, but that was enough to know how good they are and what they’re capable of. As I’ve mentioned incessantly, Tsukasa Fujimoto is one of the most consistently incredible wrestlers on the planet. Put the four of them together and you get magic.

They threw everything they could at each other for fifteen action packed minutes, including a variety of innovative and impressive double teams. This was exactly the fantastically worked, logical, and wowing spectacle I wanted, ending in a huge title change to boot. Would have easily been alone on top as my favorite match of the trip, if not for Best Friends tearing it up in another title match on a later show. 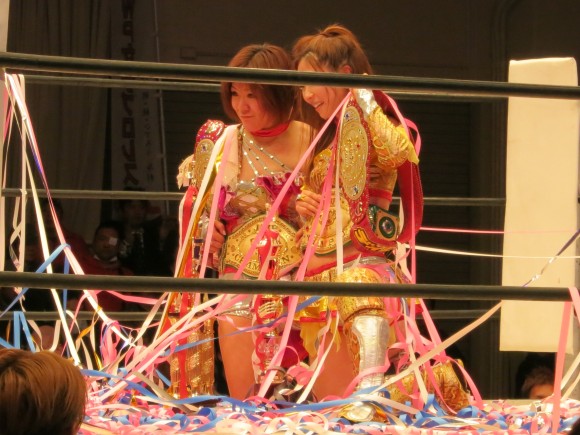 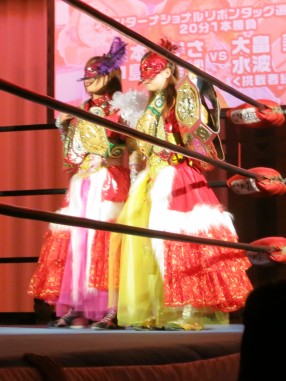 In addition to my adoration of Best Friends I am likewise a huge fan of Misaki Ohata, so was VERY excited for this tag title match at Ribbonmania.  It was as excellent as expected, and is neck and neck with Best Friends vs Jumonji Sisters as my favorite match of my trip.

I hadn’t seen Mizunami much before, but she fit in perfectly and this was just fantastic. Neither my memory nor words can do this proper justice. See it yourself if you get a chance. 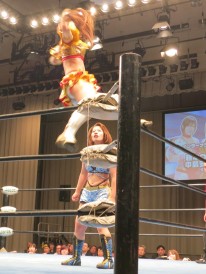 I  was blessed to have such a great opportunity to visit Japan and see so much phenomenal wrestling. I hope you’ve enjoyed my look at the best of the best.

[…] was tied for my favorite match of the eighty-four I saw the first time I went to Japan, so as mentioned I’ve really been […]

[…] International Tag Ribbon Championships at Ribbonmania in a match that immediately became a favorite of mine and I consider the teams involved two of the very best in the world. Seeing some of the best of […]

[…] Long overdue since summer’s arrived and I’ve already been lucky enough to travel back Japan since the trip I’m talking about here (more on that soon), but I still wanted to highlight the best matches I saw among an incredible batch of shows I saw in the Tokyo area to close out 2017 / start 2018. Also check out my favorites from past trips. […]

[…] December of 2015 I made my first trip to Japan and saw several excellent shows and matches. One of my most anticipated things was getting to see Ray again, and it was nice to get to talk to […]