Thirty year old Moriko is a NEET by choice who wants nothing more than to escape back into the comfort of the online world. In a bit over her head trying a new MMO, her character Hayashi attracts the assistance of the sweet and more experienced Lily, and Moriko’s solo adventure suddenly becomes more of a group effort. 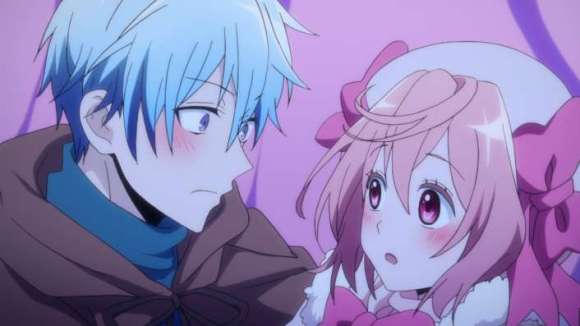 I checked this series out as part of Crunchyroll’s Passport contest, involving watching the first episodes of several new series. So I knew absolutely nothing about it going in.

The opening caught my eye, with vivid, fluid animation and a couple of intriguing glimpses. The strong initial impression continued as the main character walked into her apartment and threw a bouquet of flowers in the trash. Nice, striking way to immediately convey volumes about her. In general I thought there was a really great balance of how much to explicitly reveal and explain vs what to imply here.

This was a cute, good first episode laying the groundwork of Moriko forming relationships within the game world she’s using to try to avoid having to do so in the real world. It appropriately focuses primarily on establishing the internal game world and what she’s experiencing in it in this initial episode, but I expect more of a spotlight on her in the real world as the series progresses. There’s a lot to like and both the comedic and romantic/interpersonal elements are extremely well done so far. Definitely considering continuing with this one.

One reply on “Recovery of an MMO Junkie Episode 1 Review”

[…] Recovery of an MMO Addict, this is another anime I checked out as part of Crunchyroll’s Passport contest and as such […]