Some quick impressions on my first experiences with a few new games.

Tic-Tac-Toe was never so much fun. The idea here is you try to predict what spot your opponent will take, and if correct their piece doesn’t get placed. It’s a wonderfully simple concept that turns a trite old favorite into something different and intriguing. Beyond that are optional pieces with special powers that add further depth and variation. Really nice execution of concept here to make something new and interesting.

Dragon’s Hoard is a set collection game where players are dragons trading the requisite number of sheep of each color for treasures worth varying points. Yeah, I didn’t quite get the thematic execution either. There’s a glimpse of potential here, with the card backs being the resources needed to play the “treasures” on the fronts, different colors perhaps lending strategic choices to card drawing, and bonuses for specialization. In practice though the gameplay felt lacking (at least in the two player version I tried) with actions to attack the other player (and defend) that felt tacked on and run of the mill and an absence of interesting choices. A really poorly written  rulebook certainly didn’t help either. A second chance with more players is perhaps in order, but this felt like it could have and should have been better than it is. 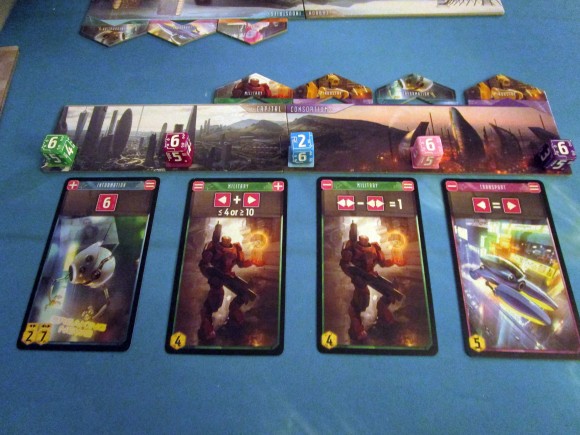 Sentient is a game that caught my eye in previews, then seemed perhaps a little too involved for my group as I tried to read up on it. So I was interested, but wanted to try it first before a purchase. It’s fantastic. The mechanics are really straightforward, with players simply choosing a card from those available each round and deciding where to place it in their area to affect their dice and score points based on their final values and the card conditions.

The conditions on the cards and trying to properly manipulate the dice are where the strategy comes in, and the game was a series of interesting, meaningful choices. A final element of having a certain number of workers to place when choosing cards to try to obtain bonus multipliers for different cards types at the end of the game is another great aspect. Really enjoyed this and will likely be adding it to my collection in the future.

That’s it for this time. Hope to be back with more soon. 🙂