Middle aged Mikami’s life isn’t nearly as exciting as he’d hoped, stuck in a salaryman’s job with no girlfriend and friends who primarily come around to brag about their good fortune. But that all might be the least of his worries when he’s unexpectedly stabbed to death and reborn in a fantasy world as the lowliest of monsters. 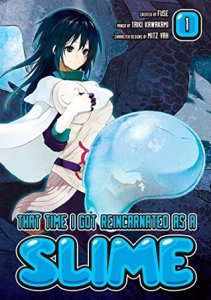 So this is pretty absurd, fairly amusing, and completely and sufficiently described by the title alone. Though nothing’s really been explained yet the setup is easy to follow and the premise interesting. The atmosphere is stereotypical Shounen power fantasy so far with the monster angle being the only real twist.

The pace seems pretty breakneck. I understand the necessity of getting to the point where Mikami can actually do something quickly, but more time spent with him exploring his predicament would have been nice. He’s a monster that seems more harmless than he is and has to learn to use his powers rather than one who has to learn to cope with being powerless and find a way to get stronger. The latter would have been much more interesting, and is more what the book description implies. There’s already a formula starting to develop to his encounters, which is a tad worrisome so early on.

Still, while nothing groundbreaking That Time I Got Reincarnated as a Slime is a decent, quick read. It will be interesting to see if the pace settles down and if the series can find a bit more depth once the main cast and environment are fully established.