Big milestone for Evolve as they had their 100th show last month in their recent home base of La Boom. Here’s a rundown of my impressions from seeing it live. 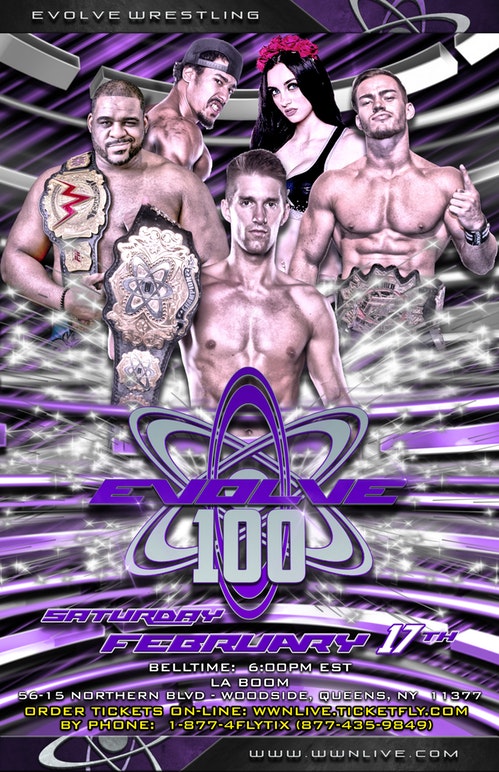 The stipulation of the opening 3-way specifying Darby Allin would lose his spot in the next day’s major 4-way if he lost to either Jarek 120 or Jason Kincaid was likely meant to add intrigue, but instead it made it made Allin’s win feel like a forgone conclusion. The whole “prelim” (pre-show) concept with wrestlers who don’t win enough having to earn their way back to the “main card” also isn’t really working because it’s regulars stuck there and with it also being broadcast as part of the ippv it’s actually just the opener. Also, by calling it preliminary a lot of people were still filing in during the match instead of being in their seats paying attention. Action was decent. I really like Kincaid and have been impressed with Jarek the couple times I’ve seen him, and both deserve better opportunities. Allin’s not a favorite of mine, so him being a centerpiece always seems to end up with the match capping out at decent for me. He’s over in general though, so I certainly can’t blame Evolve for pushing him.

Fred Yehi reigned in his normal mannerisms and “unusual” offense a bit against Dominic Garrini, which was a big plus for me. But unfortunately I thought these two didn’t mesh well and this was my least favorite match of the night. Making matters worse, Yehi’s after match promo was honestly awful, with him rambling about being better than a second match wrestler (which is a direct rehash of ACH’s angle last year, who did it better) before somehow spinning that into calling himself a “savage-weight.” I have no idea what that was supposed to accomplish, but Yehi apparently leaving Evolve shortly after this due to stalled contract negotiations I suppose I don’t need to.

Things picked up with Anthony Henry vs Tracy Williams, who put on a solid match that really played to the strengths of each to good effect. The angle of Williams struggling as Catch Point’s leader continues to build here too with Henry’s upset victory.

The End (Odinson & Parrow w/ Drennen) then came out to brawl with Williams’ stablemates Chris Dickinson & Jaka, and the tag title match was on. This went about five minutes before being thrown out and was an absolutely crazy brawl. Live this was totally satisfying, with neither the short length nor inconclusive finish mattering because of the intensity and atmosphere. But I imagine watching through a screen it could have been disappointing for such an anticipated title match. Still, no complaints from me and was one of the highlights of the night.

Amazingly though, the match that had to follow all that chaos was actually the best of the show, as Matt Riddle and James Drake beat the HELL out of each other in a star making performance for Drake. His chops drew blood from Riddle’s chest early, and Riddle turned Drake’s bright red in turn, and they just kept upping the ante as things went. Also, most importantly, there was a logical, well executed structure underlying the match and all the impressive violence. Riddle also continued his angle of asking for no rope break matches (which Drake agreed to), and they used it well without belaboring the point. Just fantastic stuff all around.

Two huge singles title matches ended the show in a double main event, starting with Keith Lee defending his WWN LIve title against the first Evolve champion AR Fox. The latter had his “crew” with him who ran interference several times to give the larger champion some additional problems to solve and also added a fair amount of energy to things with their vocal support of Fox. Impressive size vs speed battle that escalated nicely and provided opportunities for Lee to show his own agility as well. Although while I understand how impressive it is for someone Lee’s size to take a Canadian Destroyer, really he shouldn’t unless it’s going to be the finish. Or at the very least do the leg on the rope thing to break it instead of a full kickout. That minor gripe aside, this was great.

Finally the Evolve title was on the line as Austin Theory challenged Zack Sabre Jr. Theory’s fully embraced heel character, and was a credible threat to Sabre in another great match until the champion just tied him up one time too many and forced him to tap.

The after match stuff got kind of odd. Riddle came out during Sabre’s post show speech to challenge him, and was essentially told “sure if you become the #1 contender.” The lack of logic behind when Sabre just accepts random challenges and when he tells the hottest star of the promotion “not yet” is lazy booking. Riddle’s happy response of “so you’re saying there’s a chance” was awesome though.

After Sabre leaves Theory jumps Riddle (after a distraction from Priscilla Kelly) and leaves him lying. He then calls himself the future of Evolve, and was really left out to dry by the progression because the crowd just drowns him out with a “you just lost” chant. Theory wasn’t able to react well to crowd’s heckling, leaving him in awkward spot as he tried to continue with the script and the crowd was having none of it. Not his fault. They really should have switched him and Fox or something if they needed him to give this kind of promo after jumping Riddle, instead of having him act confident and like a killer and calling himself a legend literal seconds after tapping out in a title match.

As Theory leaves Riddle picks himself up really none the worse for wear and gives the usual thanks for coming speech. I appreciate the thought and adore Riddle but could have done without this if it meant actually selling the effects of Theory’s beating.

Although I did have some issues with the logic and booking, overall this was an extremely enjoyable show with strong action and an incredible atmosphere.