As always for my holiday wrestling trips, one of my most anticipated events was Ice Ribbon’s biggest of the year. 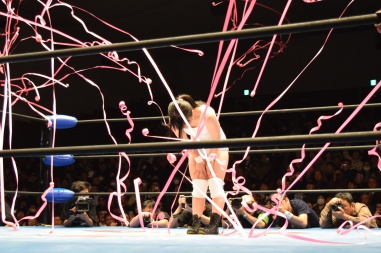 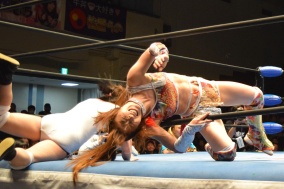 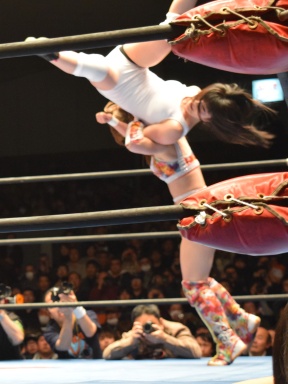 The opening contest was an unusual one, as in featured the re-debut of Tsukushi to in-ring action after her hiatus.  As announced at the dojo show on 12/23 this was to be a career reset for her, underscored by the fact that this was the opener and Tsukushi came out for it in a plain white swimsuit style outfit befitting a rookie instead any of her old gear. It was the right approach, committing to the idea of this being a new start for her and not any sort of “triumphant return.”

She had an extremely emotional match against company ace Tsukasa Fujimoto.  It was much more even than I expected, with Tsukushi going toe-to-toe with Tsukka in an extremely good contest before her inevitable defeat. They both bowed to all sides of the ring afterwards, and Tsukka carried Tsukushi to the back via piggyback. 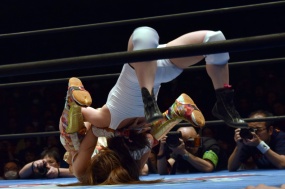 A pair of 6-woman tags followed, starting with “another” debut as Mammoth Ikino made her first Ice Ribbon appearance teaming with Hana DATE & Ibuki Hoshi in an elimination match against Satsuki Totoro, Karen DATE & Giulia. 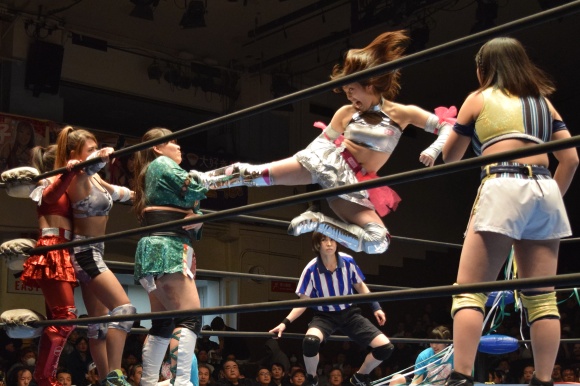 This was energetic and fun. In general I do wish wrestlers still in eliminations matches  would get up on the apron. If they’re fighting with other active participants outside it’s one thing, but having them on the floor crouched next to the eliminated team members gets confusing. That minor point aside I really enjoyed this. It was a decent debut for Mammoth, everyone looked good. Totoro and Hana continue to be particularly impressive, including the latter’s flying kick that looks like something out of a video game. 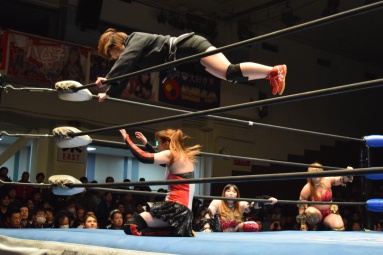 What could have been essentially a throwaway catch all match between Uno Matsuya & The Lovely Butchers (Hamuko Hoshi & Mochi Miyagi) and Tequila Saya, Maya Yukihi & Makoto was a decent contest significantly elevated by the underlying story. Uno was briefly in good spirits coming out and dancing with the Butchers in a highly amusing attempted imitation of their entrance, but as soon as that was done she adopted the poise and posture of someone with something to prove. Throughout the match she was almost desperate in her quest to upstage her rival/frequent partner Saya, including things like knocking her own partner Mochi off the apron at one point so Hamuko would have to tag her in. It was a great thread to build the match around, and Uno’s aggressive, almost selfish attitude surprisingly paying off with her pinning Saya leaves several interesting ways to proceed from here. 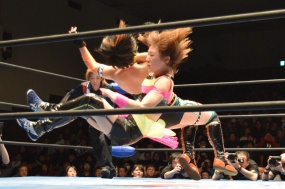 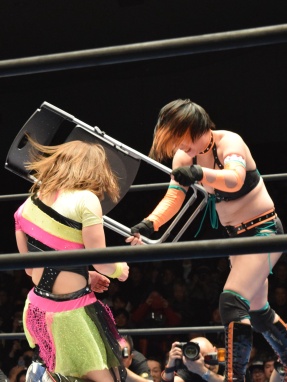 At the Christmas Eve show at KFC Hall one week prior, Akane Fujita issued a challenge to SEAdLINNG’s Arisa Nakajima which was promptly accepted. This was a great showcase opportunity for Akane, who’s really been stepping up all parts of her performances over the past year. Arisa is simply one of the greatest wrestlers in the world, and this pairing was excellent.

A fantastic moment in this match happened when Akane dug into her recent hardcore tendencies to try to get the advantage. She hit Arisa with a chair repeatedly, but the latter got up and wrenched the weapon away from her. Arisa then seemed ready to return the favor, but at the last second tossed the chair away in a “I don’t need this” manner and WAYLAID Akane with forearms instead. Great character moment and a really strong sequence altogether.

Miyako Matsumoto’s glorious overconfidence was in full force again as she had challenged Hideki Suzuki to a singles match for this event. I had just been introduced to Hideki Suzuki a couple days prior at a Basara tournament and had no doubts the unlikely winning streak I had seen from Miyako so far this trip was going to run into a brick wall. Indeed, the bell rung and Miyako ran towards Hideki, who swept her legs into a cover and pinned her in 6 seconds.

Miyako would never let a little thing like losing rob her of her victory, so she challenged Hideki to an immediate rematch. He accepted, swept her legs in the same fashion again and won in 5 seconds this time.

But no one’s force of will and delusion is as strong as the Dancing Queen’s and as Hideki’s senior in the sports she demanded a third match. Miyako’s nothing (besides stubborn) if not consistent and charged the exact same way and fell victim to the same sweep and cover for the third time… but kicks out at 2.999 to a huge ovation. It’s the simple things that can be so effective when done right, and the third time’s always the charm.

From there they had a fun match with Miyako trying to do ridiculous things like Irish Whipping Hideki, but lucking into some actual offense here and there and pouring her heart into her efforts in her own Miyako way. This was well worked and fun, being ridiculous but on purpose and with reason.

It was cool to see a wrestler with a no-nonsense aura like Suzuki play his part in a humorous match so perfectly. Since then he’s been talking about being in Ice Ribbon’s “Men’s Division”  and has finagled his way into a title match against Tsukka (also including Miyako) where if he wins the belt Tsukka and Miyako become his assistants in expanding his division and if he loses he goes away and stops bothering them (I may have taken some liberties with that phrasing 😉 ). This was my favorite match(es) of Myako’s at Ribbonmania thus far and I’m finding the subsequent angle with Hideki highly amusing. 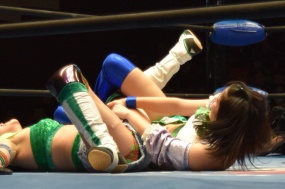 From comedy things progressed to palpable tension as GEKOKU (Kyuri & Maika Ozaki) faced the visiting Saori Anou & Tae Honma from Actwres girl’Z. Tae and Kyuri in particular seemed to want to tear into each other from the word go.

This was an excellent, heated tag match that ended with a too infrequent victory for Gekoku. A tense stare down between Kyuri and Tae afterwards emphasized things weren’t over. I knew of Saori and Tae but hadn’t seen either wrestle before, and I definitely left this wanting to see more of both. 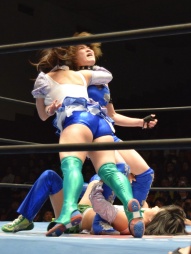 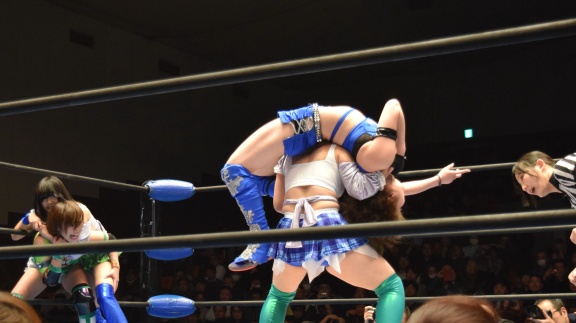 The semi-main was the Young Ice Tournament final, and it was a great match made even better by an unexpected finish. I saw a Maruko Nagasaki victory as a foregone conclusion, with her vanquishing her third member of Team DATE in a row to win the tourney. So I was pleasantly shocked to see Nao DATE take it and Ice Ribbon use the tournament to significantly elevate a new face. These are two of IR’s brightest rising stars and the match they put on certainly reflected that. 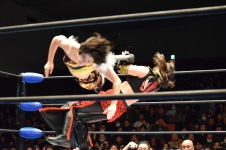 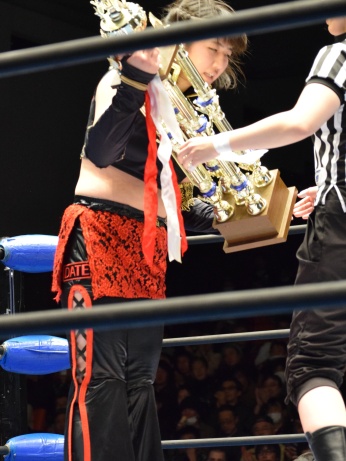 Amusing aftermath saw Hana absolutely giddy with excitement for her sister’s victory, celebrating with the trophy until Nao seemed to be shooting her “uhm, you know *I* won that, right?” looks.

To close out the show Risa Sera defended her Ice Cross Infinity Title against a human wrecking ball in the form of Kurumi Hiiragi. This confrontation had been built to nicely, right up to Risa sucessfully defending her International Ribbon Tag Team Championship with partner Maya against Kurumi and Akane at KFC Hall a week prior.  This was a very good match and solid main event that suffered just a little in the pacing department. After a hard hitting affair Kurumi stood victorious as the new champion. It was time, and Kurumi was a suitable choice to dethrone Risa. 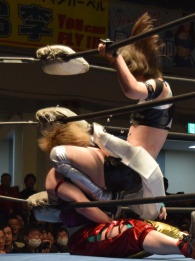 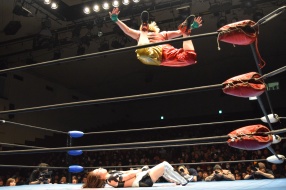 After Risa graciously congratulated the new champion, Nao Date came in to challenge Kurumi and that title match will headline Yokohama Ribbon!!! A main event shot for someone new in a fresh matchup is exactly what that type of tourney should build to, an this angle capped off an excellent show from top to bottom in a great way.

[…] wonderfully tense feud between Kyuuri and Tae Honma I’ve gushed about in my reviews of Ribbonmania and Ice Ribbon’s 1/6 show continued here in a 3-Way match. Their obsession with each other […]

[…] Ibuki Hoshi vs Giulia & Maika Ozaki. Tsukushi re-debuted in a “career reset” at Ribbonmania after a hiatus due to legal issues last summer. Ice Ribbon and Tsukushi herself have been fully […]

[…] faced off against LEVEL5 (Maki Natsumi & Yuu Yamagata). Like with Saori Anou and Tae Honma last December I thought this was my first look at Maki when watching live, but I had actually seen all three of […]

[…] faced off against LEVEL5 (Maki Natsumi & Yuu Yamagata). Like with Saori Anou and Tae Honma last December I thought this was my first look at Maki when watching live, but I had actually seen all three of […]

[…] A year ago I was amused at the beginning of Hideki’s involvement in Ice Ribbon, but unfortunately it was all downhill from there, with constantly changing and forgotten stipulations and lackluster matches. But the building resentment of the Ice roster to him has been a lone bright spot, and the parts of this where everyone (often including his own partner Saya) swarmed him for revenge in and out of the ring were a lot of fun. […]