Third in my quasi-tour of Aoi Kizuki’s final shows with various companies as she approached her retirement was a weekday Wave. Smaller audience than I’m used to for shows I’ve seen from other companies at Shinkiba 1st Ring, but it was still an excited crowd and I also lucked into running into a friend and getting to watch the show together.

First up was Miyuki Takase vs Yuki Miyazaki. Miyuki is a promising wrestler from the Actwres girlZ promotion who’s in her second year, and looked good when on offense here. To be honest, Miyazaki’s style of comedy isn’t really my style so as happens often with her matches this ended up in strictly inoffensive but unremarkable territory for me. 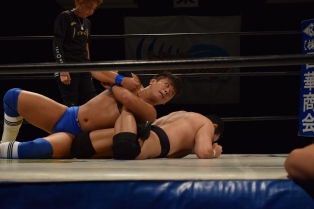 Next was Men’s Wave featuring Keisuke Goto vs Shoki Kitamura. It was a basic match and honestly too long for what it was. They weren’t quite ready to fill time for a time limit draw (so many chinlocks…), and the result was a bit bland. Nothing actively bad though, and instincts for pacing, etc will develop with more experience.

Rina Yamashita & Wave’s reigning Regina di Wave champion Asuka vs Ryo Mizunami & Nagisa Nozaki was a nice tag match wrestled at a good clip (as always this is a Wave review and as such I’m talking about their Asuka and not the former Kana). All four have high impact strike variations, so this was hard hitting and exciting.

Aoi Kizuki‘s final Wave match was a singles contest against Hiroe Nagahama in the semi-main. In a bit of a parallel I also saw Hiroe wrestle Mika Iida on the latter’s retirement show  retirement show back in May. This was a really good match, and I was thrilled to see Aoi get a singles spotlight like this on her way out.

It’s also great in general how different each of Aoi’s final matches with the various companies were while all being highly enjoyable. Nagisa got involved late in the match on Aoi behalf, and Aoi won with her sideways rotating top rope splash (Twisted Bliss). 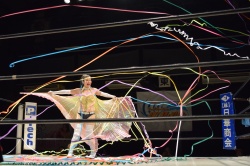 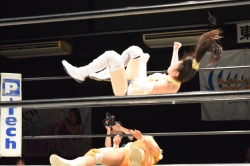 The main event was focused around another upcoming retiree, in this case one of Wave’s top stars in Misaki Ohata. She’s is engaged to DDT’s Makoto Oishi, and this match was a 6-woman tag that seemed to be a pro-marriage team of Ohata, Sakura Hirota, & KAROU against the anti-marriage team of Cherry, Yumi Ohka, & Kaori Yoneyama.

Now THIS was my type of comedy. Even without understanding the verbal exchanges the intent and attitudes of the participants came through and I was highly amused. There was also great action mixed in (particularly from Yumi & Misaki) to anchor the match and its humor. This was a blast.

After a couple of so-so matches, everything kicked into gear and three very different, yet all extremely good, matches were presented that made this a really fun time live overall. And again, I’m a huge fan of both Aoi and Misaki and feel extremely lucky to be able to see them wrestle so many times as their careers wind down.