As I mentioned before, this trip was largely based around Aoi Kizuki’s retirement and seeing this, her self-produced final show. In the week leading up to this show I was lucky enough to see her wrestle several times, at her final appearances for Ice Ribbon, Pure-J, Wave, and Gatoh Move. Several wrestlers from those companies appeared on this show as well to see the Happy Maker off.

The show opened with Hiroyo Matsumoto & Hanako Nakamori vs Totoro Satsuki & Saki. The Lady Destroyer Hiroyo’s a freelancer who wrestles most often for Oz Academy and was also in this year’s Mae Young Classic, Hanako is Pure-J’s reigning champion, and Totoro and Saki are from Ice Ribbon and Actwres Girlz respectively. All four are heavy hitters and this was a really good illustration of that style. I really liked the pairing of Saki and Totoro and would love to see them team again sometime. 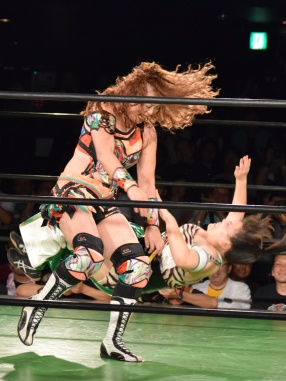 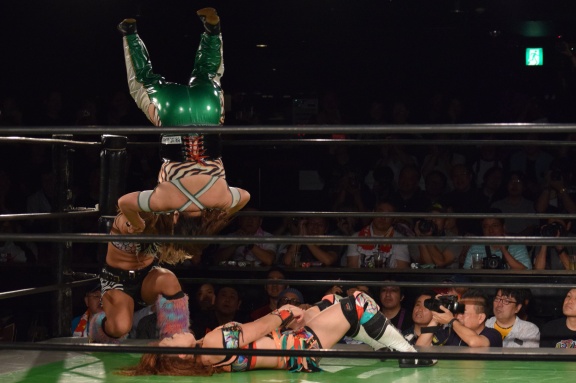 Like Hanako from the opener, Haruhi Moeka is a former tag team partner of Aoi (they were called So On Flower, which I still don’t understand as a team name ^_^;) and it was nice to see her appear here. But she had the unenviable task of facing Oz Academy’s promoter and star Mayumi Ozaki, and this went pretty much as expected. Haruhi got some defiant offense here and there, while Ozaki countered by beating the hell out of her with a chain and of course eventually won. 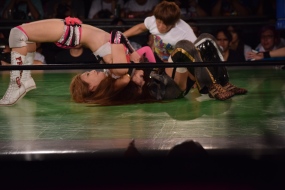 The third match saw Gatoh Move rookie Yuna Mizumori & Seadlinnng founder Nanae Takahashi take on freelancer Kaori Yoneyama (who runs some shows under her own banner of YMZ) & Pure-J rising star Yako Fujigasaki in a decent tag encounter. Considering all the experience in match, Yuna looking the best here by just a tad says really positive things about her future (as well as my own personal taste/biases in wrestling styles I suppose).

This was really fun, and Tsukka breaking out the “partners as steps” spot always make me wonderfully happy.  In a cap to the running joke of Aoi not letting Tsukka do her “Youth Pyramid” pose because of her age, Tsukka finally managed to do it uninterrupted here and Aoi even did it with her during the after show ceremony.

The two rookies in the match (Asahi and Ibuki) became the focal point towards the end, end despite Asahi desperately struggling to prove herself she eventually fell victim to a trio of Hamuko Rolls from the Butchers & Ibuki and pinned by the latter. 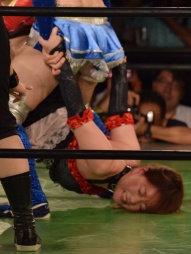 It a perfect endcap to Aoi’s career, she teamed with Gatoh Move’s Riho, & Mei Suruga against Gatoh (and Ice Ribbon) founder Emi Sakura with freelancers Makoto & Hikaru Shida in the main event.  It was a nice tribute to her trainer (Sakura) and other wrestlers she had a long history with. The sole exception was Mei, a rookie who became Aoi’s tag partner and seemingly something of  protege since her debut this spring. Mei’s already incredible for her experience level and seems to have big things ahead of her. The fact that Aoi ended up having her final singles match against Mei on October 5th (and put the rookie over to boot) and included her in this main event illustrates how close they became.

In a particularly sweet gesture, Aoi gave Mei her rainbow “wings” from her entrance gear. Mei’s excitement about it as she wore them not only for this match but at Gatoh Move later in the day was clear and contagious. Aoi herself came out for this match in special white gear that included an incredible, light up version of her wings. 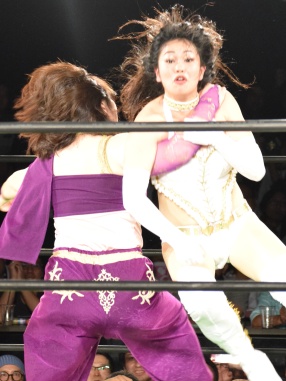 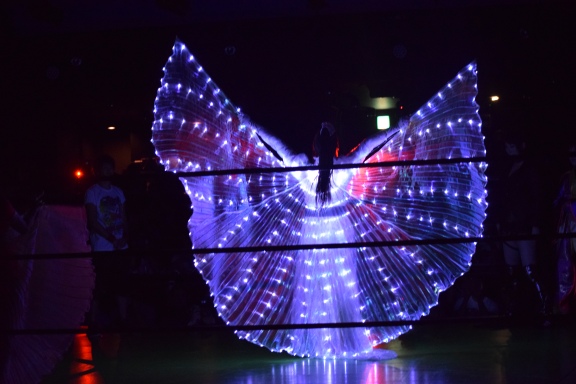 The match was fantastic and an appropriate goodbye to Aoi. The traditional spot with everyone one the show and more (including Aoi’s best friend Jenny Rose, who came to Japan to be ringside) splashing Aoi in the corner was of course a lot of fun. 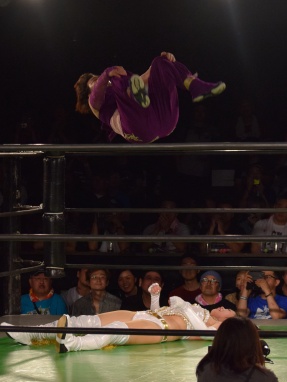 Emi, bad back and all, gave 110% to give her former trainee a proper farewell throughout the match and busted out a freakin’ 450 to pin Aoi to end it. All of Aoi’s trademarks were also on display, including one more glimpse of her rare, incredible spinning top rope splash. Fun, emotional stuff from bell to bell, and an absolute privilege to be at live. 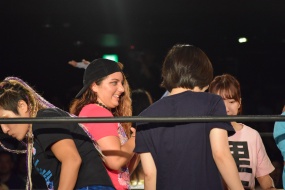 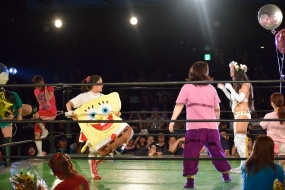 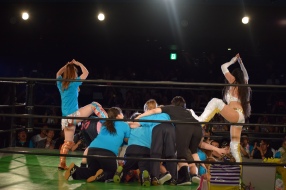 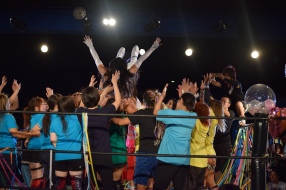 The post show retirement ceremony was likewise emotional and a treat to be at. All in all it was a wonderful, bittersweet, and fitting show see Aoi off. Although I’m sad to see her go, she had a great 13 year career and I’m really glad I had the opportunity to say goodbye to her in person and wish her well. Whatever the future after wrestling holds for her I hope life is happy for the Happy Maker. 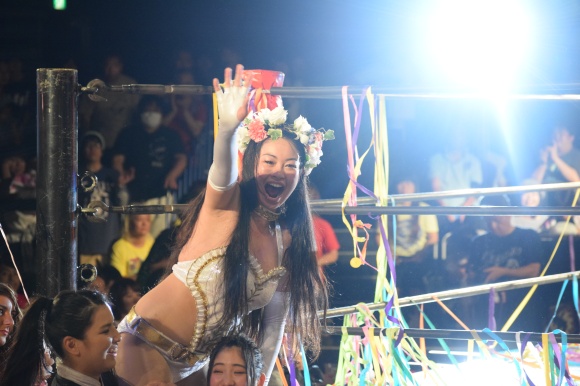 […] show was in the evening after  Aoi Kizuki’s retirement show, and several Gatoh Move talents appeared there as well. Most everyone that was involved in that […]

[…] Stepping back a little to look at one of the last two shows I have to write up from my September-October trip. Big Korakuen show for Ice Ribbon here, the day after most of the roster appeared at Aoi Kizuki’s retirement show. […]

[…] as here and there after I started coming to Japan. When I was planning this trip (largely around Aoi Kizuki’s retirement show, which featured Shida in the main event), I noticed I could catch this special anniversary show the […]

[…] Akki. Mei trying to copy Honda’s mannerisms and moves was hilariously awesome, and watching  Aoi Kizuki’s protege of sorts team with Honda after enjoying “Happy Rhodes” as a team […]

[…] was the third retirement show for the year for me after Mika Iida’s in May and Aoi Kizuki’s in October, and although it was a bit sad to say goodbye to them all I was extremely lucky to be […]

[…] during that time, including the then reigning Ice Cross Infinity Champion and recently retired Aoi […]

[…] roundtable was especially fun this time, with Aoi Kizuki visiting (to sell DVDs of her  retirement show), and Mitsuru staring a hole through Emi and others and they presented their version of what […]

[…] when I see her do it. I believe the last time we were treated to that amazing spectacle was at the retirement show of Aoi Kizuki, another of Emi’s […]

[…] Sakura, Mei, and Aoi all having singles matches against each other during the week before before Aoi Kizuki’s retirement show,– the annual Gatoh roster 6-woman tag (like Sakura, Obi, & Riho vs Mitsuru, Mei, & […]