This was two days out from Ribbonmania, so it was interesting to see how it would build up to the larger show. 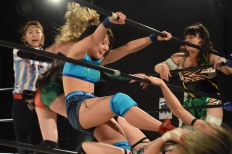 The opening tag match of Giulia & Totoro Satsuki vs Asahi & Tequila Saya was great fun. Giulia and Saya played mind games with each other continuing their rather heated feud (for IR) going into their big mixed tag match at Ribbonmania, while Asahi continued desperately trying to prove herself. The latter would once again come up just short, eventually falling victim to Totoro and Giulia’s relentless assault to give them the victory.

Ibuki Hoshi is insanely good at working the underdog formula and was in another great showing against a veteran, in this case Tsukushi. Since these two would be on opposite sides of an 8-woman tag at Ribbonmania this was in some sense another lead in, although there was no specific issue between the teams nor this pairing. The rookie who isn’t won this pretty handily.

In a more direct preview of Ribbonmania the Triangle Ribbon title challengers faced each other in a singles contest as Miyako Matsumoto faced Uno Matsuya. This was ok overall and a fine build up for the Ribbonmania match, although as much as I adore Miyako she was having an off night here even for her which did detract a bit. Her transition from sitting straight down with her opponent into the Miyacoco Clutch is awesome in theory, but I’ve never seen her execute it properly. Here she botched it rather severely, leaving her somehow sitting on top of poor Uno for the pin. 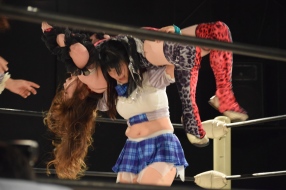 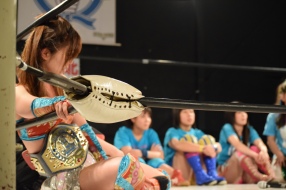 This is the type of show I like best leading into a big event. Everything had some connection to matches happening at Ribbonmania, intrigue was added going into said matches without “giving the upcoming match away” so to speak, and the action was great for the most part. Another really enjoyable visit to the Ice Ribbon dojo.