As always for my holiday wrestling trips one of my most anticipated events was Ice Ribbon’s biggest of the year, and there were a lot of interesting things happening on this card.

The opening contest saw an official debut for Suzu Suzuki against fellow rookie Asahi. Suzu’s debut had been delayed by a bicycle accident injury, and in a display of sheer, glorious chutzpah she rides one out for her entrance.

Really good showing for both here, with Suzu getting a strong start with a victory in her debut and Asahi getting more desperate in search of a win. They both have good instincts and bright futures ahead of them.

Teams This is Ice Ribbon (Hiragi Kurumi & Tsukushi), Saori Anou, & Tae Honma and Akane Fujita, Ibuki Hoshi, Satsuki Totoro, & Himeka Arita made the most of what could have been a throwaway 8 woman tag match for an exciting encounter. It had lots of cool little multi-person spots, and while the occasional one went a little off, most of this was clever, energetic, and flat out fun. Saori in particular looked like she was having a blast here.

The Tequila Saya and Giulia feud I’d seen glimpses of two days prior at the 12/29 dojo show came to a head as they faced in mixed tag action with partners Hideki Suzuki and Shinya Aoki respectively.

A year ago I was amused at the beginning of Hideki’s involvement in Ice Ribbon, but unfortunately it was all downhill from there, with constantly changing and forgotten stipulations and lackluster matches. But the building resentment of the Ice roster to him has been a lone bright spot, and the parts of this where everyone (often including his own partner Saya) swarmed him for revenge in and out of the ring were a lot of fun.

Also, the parts where Saya and Giulia faced off were nicely heated and really well worked. But honestly there wasn’t much bringing it all together and the match as a whole did feel a bit disjointed to me. Giulia eventually picked up the win on a shocked Saya, then the two reconciled as the men slinked off together. 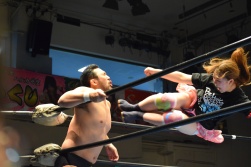 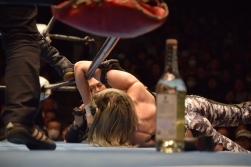 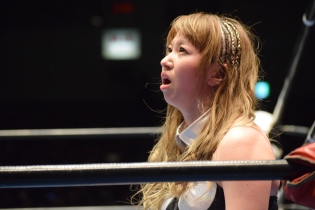 Uno Matsuya’s shot at Triangle Ribbon Champion Cho-un Shiryu was derailed from the start when fellow challenger Miyako Matsumoto objected to referee Banny* Oikawa, and brought in a ringer in the form of Frank Atsushi. Everyone, including the President of Ice Ribbon sitting at the time keeper’s table, eventually agrees to Miyako’s ridiculous request and Banny leaves the ring.

This match was all about Miyako, and unfortunately not in a particularly enjoyable way. They spent much too long belaboring the one note biased referee stuff, until Banny eventually gets tired of it and comes back out to neutralize Atsushi. She gets into it with Miyako too and crossbodies her, at which point a dazed Atsushi counts 3.  The decision stands, and Banny is new Triangle Ribbon champion.

It’s actually quite interesting where this ended up, and I’m intrigued at seeing Banny (who played her role here extremely well) eventually transition into wrestling. But the path taken to get there was a chore and poor Uno was a complete afterthought here, which is a shame. She deserves better.

Ex-Ice Ribbon roster member and now hated outsider Hikaru Shida returned to face her former trainee Risa Sera once more, in Risa’s preferred match type to boot. Given the story I wanted more fire out of this and there was a little too much “spots for spots sake” as opposed to a smooth, logically escalating match, but it still hit the right high notes and was decent overall. I have seen better hardcore matches out of both though. Risa prevailed and the two finally showed each other respect afterwards to presumably end Shida’s story with Ice Ribbon for now.

Past their difficulties as a team Gekoku (Maika Ozaki & Kyuri) was reunited in their pursuit of the International Tag Ribbon Championships held by The Lovely Butchers (Hamuko Hoshi & Mochi Miyagi).

Extremely good match, capped off by a well deserved, long time coming reign for Kyuri & Maika. Beyond excited and happy for the two of them. In a nice touch their former enemies and now semi-regular teammates Saori and Tae celebrated with the new champions ringside post show.

Maya won a tournament for another shot at Tsukka in this main event match, and it was fantastic. Maya has evolved into an extremely well rounded wrestler and has great chemistry with IR’s ace. She’s an excellent choice to dethrone Tsukka and this was the right time. Wonderful way to finish up the show and the year. 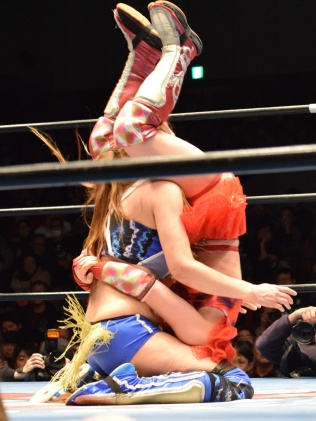 The vast majority of this time’s Ribbonmania was good to great, with strong action, good booking, and fresh faces holding their titles. Excellent and highly recommended show overall.

* I don’t generally (ever, really) footnote things in this blog, but wanted to talk for a minute about language and didn’t want to bring the discussion of the show itself to a screeching halt above. Banny’s name is based on the English word “bunny” and is supposed to have that connection. But when foreign words are brought into Japanese they are spelled with a particular phonetic alphabet. The adapted words are then sometimes reconverted into English letters (at least partially) based on romanization rules / how Japanese speakers would pronounce the sounds, as in this case. Regardless of the origin of the name and as much as I’d prefer to avoid the confusion, she spells her name as “Banny” when using English letters so that is the spelling I’ll be using.