This show was a “January Birthdays Produce,” with Tequila Saya, Maya Yukihi, and Uno Matsuya in charge of the festivities and another special Shutter Ribbon event allowing pictures during the show..

We started right in with a theme match, as “Saya” (Hamuko Hoshi) faced “Maya” (Uno Matsuya) to open. This wasn’t like most other costume matches I’ve seen in Ice Ribbon, as there was no requirement to to try wrestle like person you’re dressed as. Still highly amusing, and well worked with a couple of believable near falls for Uno before Hammy put her away. 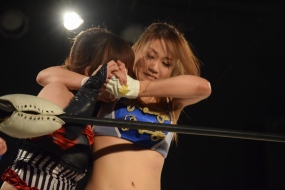 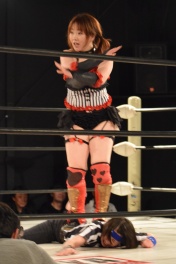 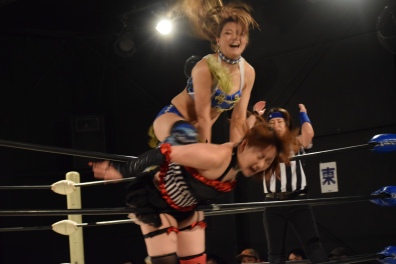 Maya Yukihi vs Miyako Matsumoto was perhaps even more ridiculous to be expected from these two, as poor referee and reigning Triangle Ribbon Champion Banny Oikawa was frequently draw into the action (as was happening in many matches around this time). More story than matches, although Maya did provide some good action to anchor things and this was fine for what it was.

Giulia & Suzu Suzuki vs Asahi & Tsukasa Fujimoto was one of IR’s weird and wonderful stipulation matches. Each team was assigned 3 moves from the repertoire of Saya or Uno respectively, who amusingly demonstrated their moves on each other before the match. In addition to the normal ways to win a match, victory could be achieved by successfully executing all 3 moves on your opponents.

As an additional treat, Maya refereed this. 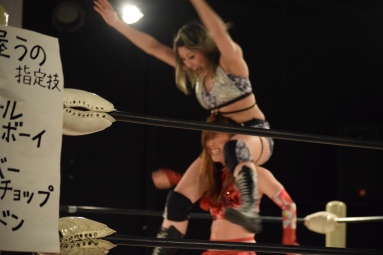 This was great, with fighting over the checklist moves providing an additional layer of storytelling and fun to the match. The thread of Asahi being desperate for victory and to prove herself continued, and she executed both the schoolboy and Katsudon to get her team within one move of winning after being behind as her opponents managed the Tokuho and Submarine early.

In a clever sequence once again bringing Asahi oh so close to victory without quite getting there, she hit everyone in the match with the top rope chop except who she needed to (her legal opponent at the time, Giulia, who kept dodging or pulling others in the way).

Really nice touch on the finish in which Maya seemed to wave off the checklist victory for Giulia because she didn’t quite get Saya’s finisher right (the Grand Maestro de Tequila is hard to execute) and counted the pin instead (producing the same outcome in an internally consistent way). This was so much fun.

The main event of  Maika Ozaki & Mochi Miyagi vs Tequila Saya & Tsukushi started off with a three way stare off in beginning, as neither impending challenger for Maika’s tag championship Saya nor one of the wrestlers who would soon be facing Maika in a triple threat #1 contender’s match for Maya’s Ice Cross Infinity title Tsukushi wanted to play nice. Mochi was caught in the middle and just kind of got fed up trying to cheerfully offer an opening handshake and left the three others to their brooding.

Solid match, with a lot of the highlights once again revolving around Maika’s incredible power. Her double torture rack in particular never fails to impress.

Saya pinned Maika with the Grand Maestro, meaning along with the 6-woman tag on 1/5/19 she had pinned both of the reigning tag champions with it going into Burning Raw (her & Giulia)’s tag title shot. Nice booking. 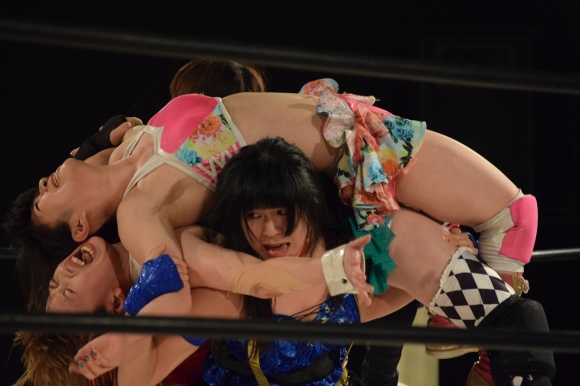 Emotional roundtable, with everyone (well, Saya, Tsukushi, and Giulia…) seeming to lay into Maika about everything from Kyuri being absent from this show to criticizing Maika for trying to be a double champ, etc. Then Asahi was crying in frustration during her turn to speak.

Things lightened a bit to end with birthday cake coming out for the producers of the night.

Also, Tsukka was honored with Tokyo Sports Women’s Wrestler of the Year Award for 2018 and had her well deserved trophy with her after this show.

This was a great little dojo show to end my Ice Ribbon run for this trip, with nicely building stories and enjoyable matches throughout.

[…] subsequent times I’ve been lucky enough to see her wrestle, including some particularly fun matches this past […]