It’s been interesting how different the three Joshi shows I’ve seen so far have been from one another. Marvelous has been the biggest surprise so far, because it was also VERY different from their USA shows. 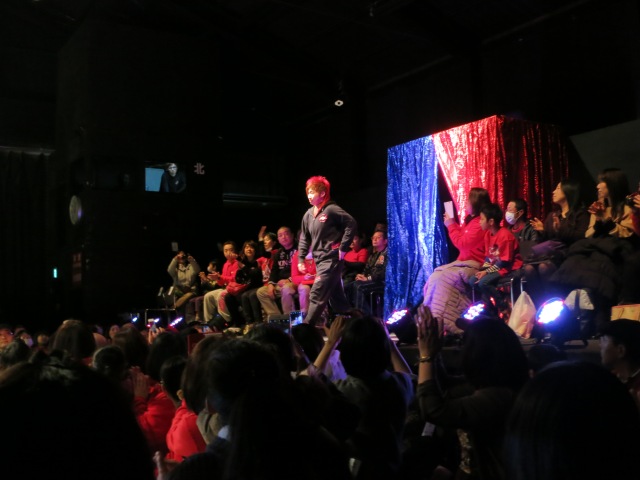 The Marvelous show featured three matches, and struck me as “a bit of something for everyone.” Before the matches most of the roster came out and all had some time on the mic with Chigusa. Then they each signed a few foam balls and tossed them into the audience as they left the ring. I was lucky enough to be thrown one. Neat keepsake. 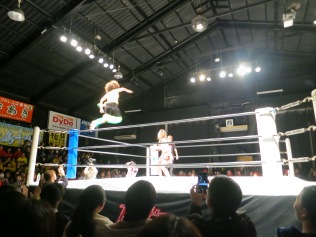 The opener, featuring Kyoko Kimura vs. Megumi Yabushita, had heavy comedic overtones and was decent for what it was. A mostly straight up tag match was next as Takako Inoue and KAORU faced Alex Lee and Ray. All four had slightly different styles but it meshed well and this was quite good. Big fan of Ray from her time in Shimmer so was nice to see her here. Sad I didn’t get to see her cartwhell bomb, but she’ll be at other shows. Alex Lee kept up well and I’d like to see more of her. Amusing side note for me was that she came out to one of my favorite songs, which I had recently remarked would make great entrance music for someone. 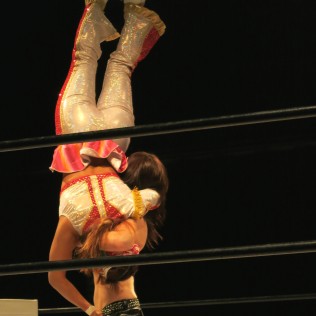 Takako and KAORU made a good heel team and were both about what I expected from their reputations. After the match Takako stayed behind and sang for the crowd.

Intermission was a nice little break. Not many of the wrestler were out (that was after the show) but I did get to talk to Ray for a minute and it was great to watch Alex Lee and some other bring a bunch of the kids from the audience into the ring, let them run around a little, and do some simple “drills” with them.

After intermission was the main event, a 6 on 2 handicap match featuring Chigusa and 5 teammates against Dump Matusmoto and Yumiko Hotta. Yes, I’m glossing over the faces, but they were just there to be cannon fodder for Dump to hit with a kendo stick and other objects over and over. The only one who did anything noteworthy was the one who turned on Chigusa late in the match (whose name I don’t know). Hotta came to the ring with numerous pairs of handcuffs hanging off her gear, so it was obvious where things were eventually going. This was an ECW style weapons brawl that went all over the arena. 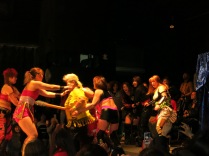 On the one hand this was disappointing because I saw Takumi Iroha wrestle in NY for Marvelous’ US show and she’s amazing. Was really hoping to see her in a traditional match where she could show what she could do. Instead I saw her handcuffed to the ropes and periodically beaten with a kendo stick. And these type of brawls aren’t exactly my cup of tea. On the other hand this was great for what it was. The heat coming from sections of fans for both Dump and Chigusa was incredible, and the mid-match surprise of legend Manami Toyota coming out to help Chigusa was fantastic. 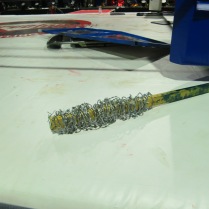 All the wrestlers came out to meet fans and sell merch after the show, and the lines for both Dump and Chigusa were INSANE. Really glad I caught this, as it’s their only show while I’m here.

At night I went to DIANA. Cool venue on the 5th floor of a giant open shopping center.  I was seriously jetlagged by this point and had to walk around during intermission to try to shake it off, but still enjoyed the show.

The opener was already my third time seeing Hamuko Hoshi wrestle, here against Yuiga. Honestly I didn’t enjoy this match. Hoshi’s character doesn’t click with me and she did not sell pain AT ALL while in Yuiga’s submission holds. Totally killed the match for me. Really hope this was an anomaly, as I’ll be seeing a lot more of her on this trip.

In a great bit of luck I was able to see Jenny Rose vs Kagetsu in Jenny’s last match of her current tour of Japan before she heads back to the states. Both looked good here and Jenny is clearly making the most of her time spent in Japan. She recognized me and my friend from Shimmer shows and it was great to get to chat with her during intermission. I was excited to hear about the Aspire promotion she setting up in the PA / NJ area.

She was back out immediately seconding her CRYSIS seniors Jaguar Yokota and Yumiko Hotta vs Megumi Yabushita and Mima Shimoda. This was more of the one sided illegal tactics from the heels I’m still getting used to over here. Everyone looked good though, and watching veterans who are clearly masters of their craft against younger wrestlers is always a treat. 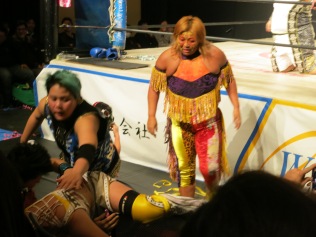 After intermission was the main event: Kyoko Inoue, Kaoru Ito and Meiko Tanaka vs. Chikayo Nagashima, Keiko Aono and Mask De Sun. Mask De Sun’s hair looks very familiar from earlier in the day. This was a high energy, chaotic main event with the heels doing everything they could to triple team and gain momentary advantages over the powerhouses that are Inoue and Ito. Kudos to setting up a countout finish that actually felt main event worthy, as the veterans trusted their 16 year old rookie teammate to get back into the ring after everyone was brawling through the crowd and concentrated on keeping the other team occupied. So with a single second left Meiko dives into the ring and wins for her team. Kyoko sells this as being a huge accomplishment and being extremely pround of Meiko, which made the moment effective.

Another fun pair of shows, and I’m thrilled to be starting my trip out with a good variety of match types, wrestlers, and promotions (except for too much Hammy).