I continued to have a nice variety of wrestling shows during my Japan trip as I checked out two more promotions I hadn’t previously seen (with more to come). 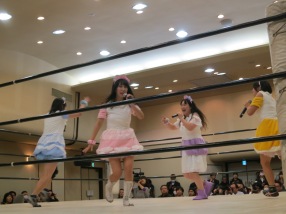 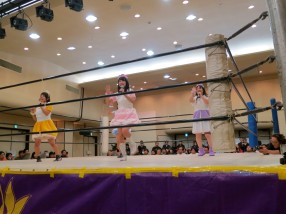 Gatoh Move is the first promotion I’ve been to with some emphasis on other entertainment as part of the wrestling show. It opened with three song and dance numbers. Two were performed by a foursome of various wrestlers consisting of founder Emi Sakura and three of the younger member of the roster. The last was by the tag-team Buribato (SAKI and MIZUKI), who would face Emi Sakura and Nanae Takahashi in the main event. It was interesting way to start out, and was reasonably entertaining. 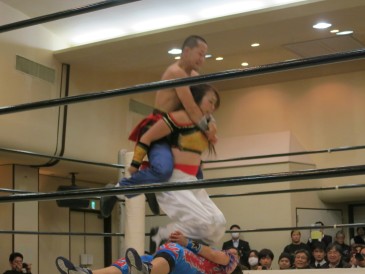 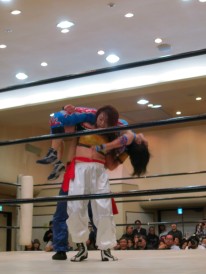 The opening match was a mixed tag pitting Hiroyo Matsumoto and Cho-un Shiryu vs Sayaka Obihiro and Antonio Honda. This was as well worked a mixed tag as I’ve ever seen. When a story is being told and they play to the strengths of the format these can be excellent. Having four wrestlers in there with distinct personalities and including a great powerhouse like Matsumoto also helps. Fun start.

The midcard men’s matches were a good mix of styles, from a MMA type contest to a comedy match to a straight up sprint (which was excellent outside of some annoying ignoring of leg work). Most of it wasn’t quite on par with the women’s matches, but was a decent way to fill out the show. I will note that Brother YASSHI has incredible charisma. He was amazing on the mic even without me understanding a word of it. 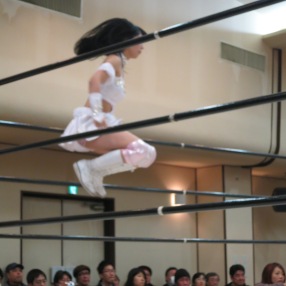 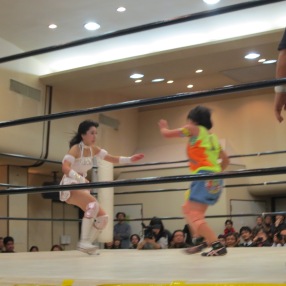 Makoto and Riho vs Hirkaru Shida and Kotori was a solid tag team contest with a lot of interesting and impressive exchanges. It was great to see Shida wrestle again after a couple of years. Was my first time seeing the younger wrestlers in this match. Both showed a lot, particularly Riho. 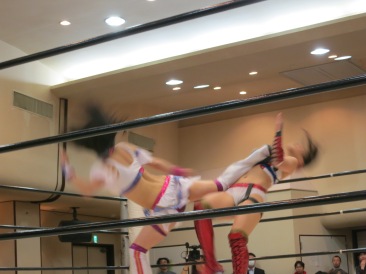 The IWA Triple Crown title match between DJ Nira and Kaori Yoneyama was VERY strange, but highly amusing somehow. After appearing normal in the last match, Riho came out bound in the title belts as Nira’s second, acting subservient and getting up on the apron and repeating phrases in monotone to distract Yoneyama whenever she gained control. Nira’s offense consisted of lunging double punches, which missed as often as they worked. Somehow the comedy did come together and Yoneyama’s perseverence and eventual victory made this odd spectacle entertaining.

The main event featured Emi Sakura and Nanae Takahashi vs Buribato (SAKI and MIZUKI). Looked like a mismatch initially, but the younger duo quickly established themselves as a viable threat and this was a spectacular main event. Nearly twenty full minutes of excellent back and forth tag team wrestling.

The show ended with more singing and dancing from the same group that started the show, and the wrestlers made their way around the crowd shaking hands and thanking us for coming. Nice touch and this was a great, fun show overall. 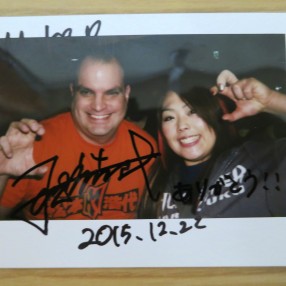 The next day I saw JWP in the same venue. It’s a perfect place for wrestling shows with good lighting and a decent setup for seating. 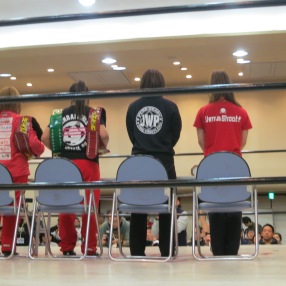 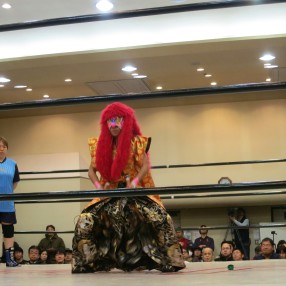 After a press conference type intro that hyped the huge upcoming tag title match at JWP’s Korakuen show, Commando Boishoi faced KAZUKI. I was honestly expecting comedy from Boishoi given her attire, but in fact she’s a fantastic no-nonsense wrestler (and did an amazing mini-demo with nun-chucks as part of her entrance). Strong opener. 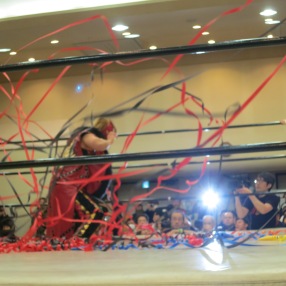 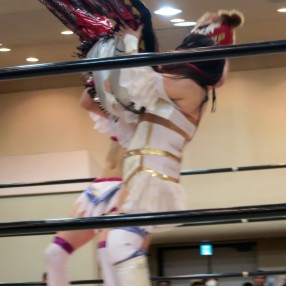 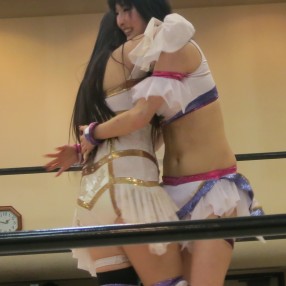 Leon and Meiko Tanaka vs Hanako Nakamori and Makoto was a great little tag match. Nice chemistry from both teams. I’ve seen Meiko a couple of times now and she’s very impressive for her age and experience.I have a feeling she’s just going to keep getting better and better. Her offense was a perfect fit with that of veteran Leon. I liked the pairing of Hanako and Makoto, and hope they team again.

I’d heard a lot about the Jumonji Sisters (DASH Chisako and Sendai Sachiko), and they certainly didn’t disappoint against Raideen Hagane and Yako Fujigasaki. JWP’s tag champs are incredible, and I am beyond excited to see them against two of my favorites in team Best Friends at JWP Climax. Their opponents here looked good too, playing to their strengths and making the most of Raideen’s size for fun spots. 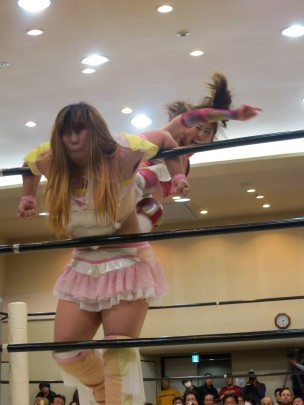 Rabbit Miu vs Tsukasa Fujimoto was next. Miu is one of the favorites of a friend of mine, so even though she was yet another wrestler I hadn’t seen previously to this I knew a fair bit about her. She looked extremely good here and totally kept up with (as I’ve mentioned a time or ten) one of the best in the world. Miu has great instincts and is able to much more in the ring than you’d guess by her size. Excellent semi-main. 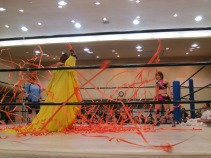 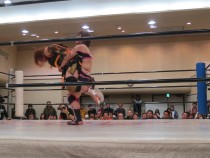 The main event of Arisa Nakajima vs Kayoko Haruyama was phenomenal, and the best match I’d seen on my trip so far. They beat the high holy hell out of each other, with forearm shots that thundered through the crowd. Haruyama’s guillotine leg drop from the top rope with Arisa standing on the second is one of the most brutal looking moves I’ve seen, and I was totally marking out for every German suplex variation they threw at each other. Lucky to be seeing a couple of Haruyama’s last matches, and Arisa is everything I’ve heard and more.

So these were two more awesome shows on my trip. 🙂 The JWP was the best yet, with five top notch matches on a card that just got better and better as it went. It’s been really cool that my first several shows have been all different promotions, as the contrast is really interesting. 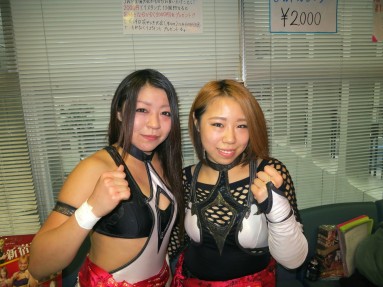 […] up on Christmas Eve was Gatoh Move at Itabashi Green Hall, where the first show of theirs I saw was at in 2015. Still one of my favorite venues. Unlike Gatoh Move’s home base shows their […]

[…] Gatoh Move, and completely unfamiliar with 17 year old competitor named Kotori, when I attended my first show of theirs on 12/22/15. Kotori was on opposite sides from another new to me competitor named Riho in a tag […]